Nights Warming Faster Than Days Across Much of The Planet 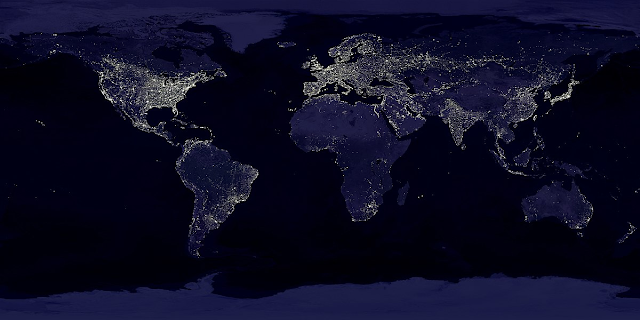 Credit: NASA
University of Exeter scientists studied warming from 1983 to 2017 and found a difference in mean annual temperature of more than 0.25°C between daytime and night-time warming in over half of the global land surface.
Spatial variation in warming asymmetry across the diel cycle between 1983 and 2017. In total c.54% of the land surface has experienced warming asymmetry of >0.25°C, with more than twice the area of land warming more during the nighttime than the daytime. Driven primarily by changing levels of cloud cover this is associated with a wetting (increased nighttime warming) and drying (increased daytime warming) of the climate. The blue illustrates where the nighttime has warmed more rapidly, and red where the daytime has done so. The projection is Behrmann's equal area.

Credit: University of Exeter
Days warmed more quickly in some locations, and nights did in others - but the total area of disproportionately greater night-time warming was more than twice as large.

The study shows this "warming asymmetry" has been driven primarily by changing levels of cloud cover.

"We demonstrate that greater night-time warming is associated with the climate becoming wetter, and this has been shown to have important consequences for plant growth and how species, such as insects and mammals, interact.

"Conversely, we also show that greater daytime warming is associated with drier conditions, combined with greater levels of overall warming, which increases species vulnerability to heat stress and dehydration.

"Species that are only active at night or during the day will be particularly affected."

They then looked at changes in vegetation growth and precipitation over the same period.

The study found that differences in daytime and night-time vegetation growth depended on rainfall.

Increased night-time warming led to less vegetation growth where it rained more, likely due to increased cloud cover blocking the sun. Whereas, vegetation growth was limited by water availability due to less rainfall where the days warmed more.

The research was funded in part by the Natural Environment Research Council.

The paper, published in the journal Global Change Biology, is entitled: "Global variation in diurnal asymmetry in temperature, cloud cover, specific humidity and precipitation and its association with Leaf Area Index."