A team of University of Arkansas physicists has successfully developed a circuit capable of capturing graphene's thermal motion and converting it into an electrical current. 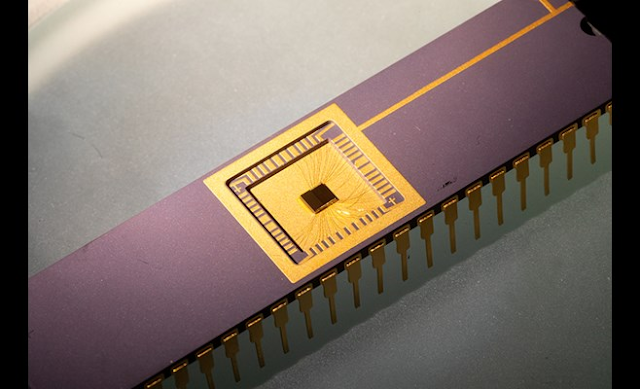 
“An energy-harvesting circuit based on graphene could be incorporated into a chip to provide clean, limitless, low-voltage power for small devices or sensors,” said Paul Thibado, professor of physics and lead researcher in the discovery.
<iframe width="700" height="406" src="https://www.youtube.com/embed/KiLTEjm8zLw" frameborder="0" allow="accelerometer; autoplay; clipboard-write; encrypted-media; gyroscope; picture-in-picture" allowfullscreen></iframe>
Credit: University of Arkansas
The findings, published in the journal Physical Review E, are proof of a theory the physicists developed at the U of A three years ago that freestanding graphene — a single layer of carbon atoms — ripples and buckles in a way that holds promise for energy harvesting.

The idea of harvesting energy from graphene is controversial because it refutes physicist Richard Feynman’s well-known assertion that the thermal motion of atoms, known as Brownian motion, cannot do work. Thibado’s team found that at room temperature the thermal motion of graphene does in fact induce an alternating current (AC) in a circuit, an achievement thought to be impossible.
Testing a graphene chip for power 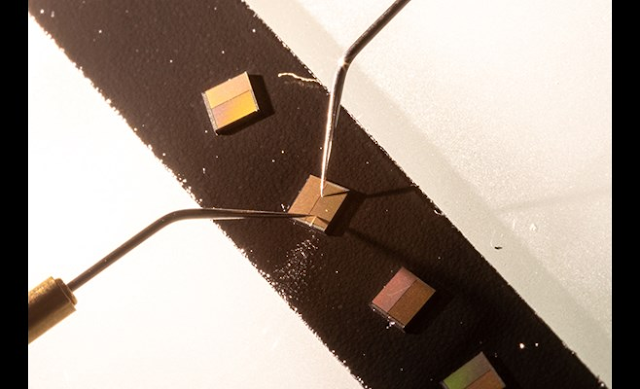 Credit: University of Arkansas
In the 1950s, physicist Léon Brillouin published a landmark paper refuting the idea that adding a single diode, a one-way electrical gate, to a circuit is the solution to harvesting energy from Brownian motion. Knowing this, Thibado’s group built their circuit with two diodes for converting AC into a direct current (DC). With the diodes in opposition allowing the current to flow both ways, they provide separate paths through the circuit, producing a pulsing DC current that performs work on a load resistor.

Additionally, they discovered that their design increased the amount of power delivered. “We also found that the on-off, switch-like behavior of the diodes actually amplifies the power delivered, rather than reducing it, as previously thought,” said Thibado. “The rate of change in resistance provided by the diodes adds an extra factor to the power.”

The team used a relatively new field of physics to prove the diodes increased the circuit’s power. “In proving this power enhancement, we drew from the emergent field of stochastic thermodynamics and extended the nearly century-old, celebrated theory of Nyquist,” said coauthor Pradeep Kumar, associate professor of physics and coauthor.
Paul Thibado, professor of physics, with sample energy-harvesting chips under development. 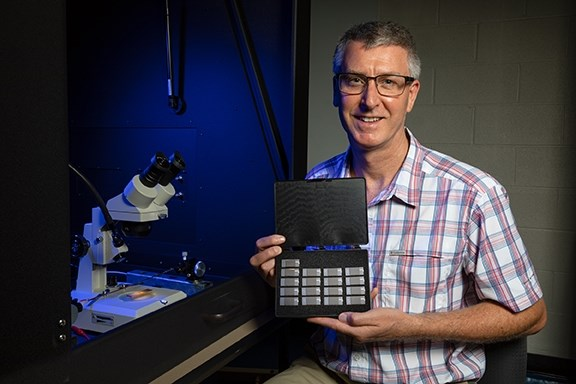 The team also discovered that the relatively slow motion of graphene induces current in the circuit at low frequencies, which is important from a technological perspective because electronics function more efficiently at lower frequencies.

“People may think that current flowing in a resistor causes it to heat up, but the Brownian current does not. In fact, if no current was flowing, the resistor would cool down,” Thibado explained. “What we did was reroute the current in the circuit and transform it into something useful.”

The team’s next objective is to determine if the DC current can be stored in a capacitor for later use, a goal that requires miniaturizing the circuit and patterning it on a silicon wafer, or chip. If millions of these tiny circuits could be built on a 1-millimeter by 1-millimeter chip, they could serve as a low-power battery replacement.

The University of Arkansas holds several patents pending in the U.S. and international markets on the technology and has licensed it for commercial applications through the university’s Technology Ventures division. Researchers Surendra Singh, University Professor of physics; Hugh Churchill, associate professor of physics; and Jeff Dix, assistant professor of engineering, contributed to the work, which was funded by the Chancellor’s Commercialization Fund supported by the Walton Family Charitable Support Foundation.