Volcanic Activity Ruled Out as Cause of Dinosaur Extinction, An Asteroid Did It

Sixty-six million years ago – at the Cretaceous–Paleogene boundary – nearly three-quarters of all animal species died out, including the dinosaurs. The cause for this has fuelled controversy among scientists for decades. The latest research from an international research team indicates that an asteroid strike was the sole driver of the mass extinction and that volcanic activity did not play a role, even though it certainly had an impact on the climate and the biosphere. Geoscientists from Heidelberg University were significantly involved in the investigations.

The mass extinction at the end of the Cretaceous period was the most recent of five major events of this type in the Earth's history. As Heidelberg geoscientist Prof. Dr Oliver Friedrich explains, there are two possible scenarios that are likely causes – an asteroid strike off Mexico's Yucatán Peninsula, the consequences of which are still visible today in the form of a 200-km-wide crater, or massive volcanic eruptions over a longer geological period in the Deccan region of Southern India. A 36-member research team led by Prof. Dr Pincelli M. Hull of Yale University (USA) and PD Dr André Bornemann of the Federal Institute for Geosciences and Natural Resources (BGR) has now studied the impact of the Deccan volcanism using a variety of geochemical and micropalaeontological methods.

They analysed deep-sea drill cores obtained from the North and South Atlantic as well as the Pacific, covering the Cretaceous-Paleogene boundary period. The palaeontological data garnered from the sediment samples and reconstructed temperature changes were compared with the results of carbon cycle models to reveal a possible fingerprint of the Deccan volcanism and to precisely date the phases of volcanic activity. Researchers at the Institute of Earth Sciences at Heidelberg University were tasked with measuring stable oxygen and carbon isotope ratios to verify changes in temperature and in the carbon cycle in the North Atlantic.

The researchers have analysed deep-sea drill cores obtained from the North and South Atlantic as well as the Pacific. 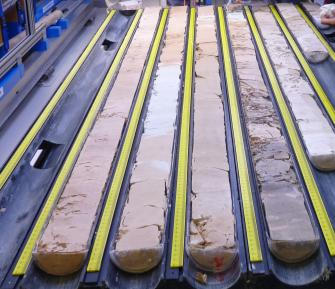 The findings from the research team of Prof. Hull and Dr Bornemann support the assumption that an asteroid strike was the sole cause of the mass extinction of animal species. The research results also show that volcanic eruptions certainly affected the climate and the biosphere both before and after the mass extinction, such as in the form of short-term temperature changes.

Prof. Friedrich directs the Sedimentology and Marine Paleoenvironmental Dynamics Research Group at the Institute of Earth Sciences at Heidelberg University. The research work was funded by the German Research Foundation (DFG).