An international research team reports new Homo sapiens fossils from the site of Bacho Kiro Cave in Bulgaria. These fossils are directly dated to approximately 45,000 years ago and in direct association with stone tools, the remains of hunted animals, bone tools, and personal ornaments. The new discoveries document the earliest known Upper Paleolithic Homo sapiens and push back in time the start of this major cultural transition in Europe. Their stone tools unearthed at the site link Bacho Kiro Cave to finds across Eurasia as far east as Mongolia.

Stone artifacts from the Initial Upper Paleolithic at Bacho Kiro Cave: 1-3, 5-7 Pointed blades and fragments from Layer I; 4 Sandstone bead with morphology similar to bone beads; 8 The longest complete blade. 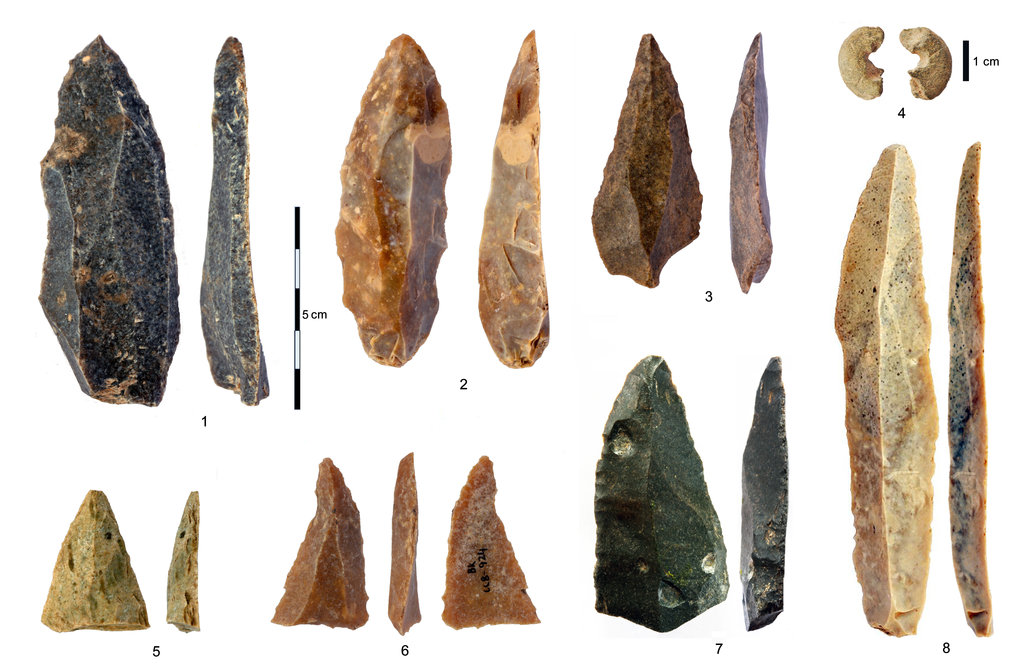 
Two studies report new Homo sapiens fossils from the site of Bacho Kiro Cave in Bulgaria. “The Bacho Kiro Cave site provides evidence for the first dispersal of H. sapiens across the mid-latitudes of Eurasia. Pioneer groups brought new behaviours into Europe and interacted with local Neanderthals. This early wave largely predates that which led to their final extinction in western Europe 8,000 years later”, says Jean-Jacques Hublin, director at the Max Planck Institute for Evolutionary Anthropology in Leipzig, Germany.

One of the excavation directors, Tsenka Tsanova of the Department of Human Evolution at the Max Planck Institute for Evolutionary Anthropology (Leipzig, German), taking sediment samples for DNA analysis. 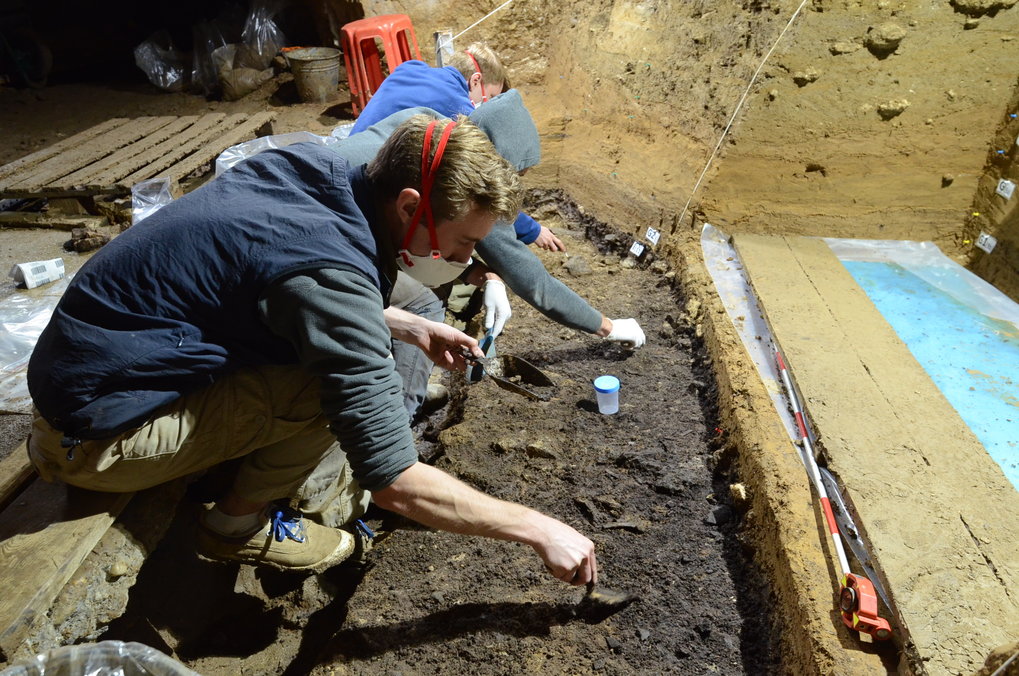 
An international research team, led by Jean-Jacques Hublin, Tsenka Tsanova and Shannon McPherron of the Max Planck Institute for Evolutionary Anthropology, and Nikolay Sirakov and Svoboda Sirakova of the National Institute of Archaeology with Museum at the Bulgarian Academy of Sciences in Sofia, Bulgaria, renewed excavations at Bacho Kiro Cave in 2015. The most spectacular finds come from a rich, dark layer near the base of the deposits. Here the team uncovered thousands of animal bones, stone and bone tools, beads and pendants and the remains of five human fossils.


Except for one human tooth, the human fossils were too fragmented to be recognized by their appearance. Instead, they were identified by analysing their protein sequences. “Most Pleistocene bones are so fragmented that by eye, one cannot tell which species of animal they represent. However, the proteins differ slightly in their amino acid sequence from species to species. By using protein mass spectrometry, we can therefore quickly identify those bone specimens that represent otherwise unrecognizable human bones”, says Frido Welker, Postdoctoral Research Fellow at the University of Copenhagen and research associate at the Max Planck Institute for Evolutionary Anthropology.

To know the age of these fossils and the deposits at Bacho Kiro Cave, the team worked closely with Lukas Wacker at ETH Zurich, Switzerland, using an accelerator mass spectrometer to produce ages with higher precision than normal and to directly date the human bones.

“The majority of animal bones we dated from this distinctive, dark layer have signs of human impacts on the bone surfaces, such as butchery marks, which, along with the direct dates of human bones, provides us with a really clear chronological picture of when Homo sapiens first occupied this cave, in the interval from 45,820 to 43,650 years ago, and potentially as early as 46,940 years ago”, says Helen Fewlass of the Max Planck Institute for Evolutionary Anthropology. “The radiocarbon dates at Bacho Kiro Cave are not only the largest dataset of a single Palaeolithic site ever made by a research team, but also are the most precise in terms of error ranges”, say researchers Sahra Talamo from the University of Bologna and Bernd Kromer from the Max Planck Institute in Leipzig.
DNA sequencing


One of the excavation directors, Tsenka Tsanova of the Department of Human Evolution at the Max Planck Institute for Evolutionary Anthropology (Leipzig, German), taking sediment samples for DNA analysis. 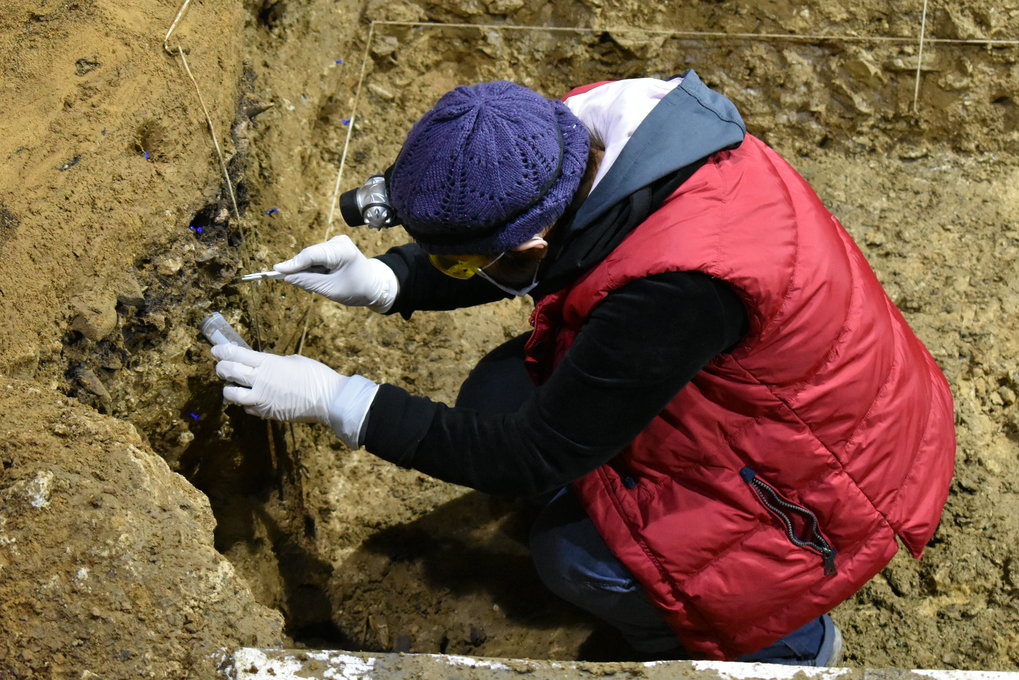 Though some researchers have suggested that Homo sapiens may have already occasionally entered Europe by this time, finds of this age are typically attributed to Neanderthals. To know which group of humans were present at Bacho Kiro Cave, Mateja Hajdinjak and Matthias Meyer of the genetics team led by Svante Pääbo at the Department of Evolutionary Genetics at the Max Planck Institute for Evolutionary Anthropology sequenced the DNA from the fragmented fossils bones.

“Given the exceptionally good DNA preservation in the molar and the hominin fragments identified by protein mass spectrometry, we were able to reconstruct full mitochondrial genomes from six out of seven specimens and attribute the recovered mitochondrial DNA sequences from all seven specimens to modern humans. Interestingly, when relating these mtDNAs to those of other ancient and modern humans, the mtDNA sequences from Layer I fall close to the base of three main macrohaplogroups of present-day people living outside of Sub-Saharan Africa. Furthermore, their genetic dates align almost perfectly with those obtained by radiocarbon”, says Mateja Hajdinjak, Postdoctoral Fellow at the Francis Crick Institute in London and research associate at the Max Planck Institute for Evolutionary Anthropology.

The results demonstrate that Homo sapiens entered Europe and began impacting Neanderthals by around 45,000 years ago and likely even earlier. They brought into Bacho Kiro Cave high quality flint from sources up to 180 km from the site which they worked into tools like pointed blades perhaps to hunt and very likely to butcher the remains of the animals found at the site.

“The animal remains from the site illustrate a mix of cold and warm adapted species, with bison and red deer most frequent”, says palaeontologist Rosen Spasov from the New Bulgarian University. These were butchered extensively but were also used as a raw material source. “The most remarkable aspect of the faunal assemblage is the extensive collection of bone tools and personal ornaments”, says zooarchaeologist Geoff Smith from the Max Planck Institute for Evolutionary Anthropology. Cave bear teeth were made into pendants, some of which are strikingly similar to ornaments later made by Neanderthals in western Europe. 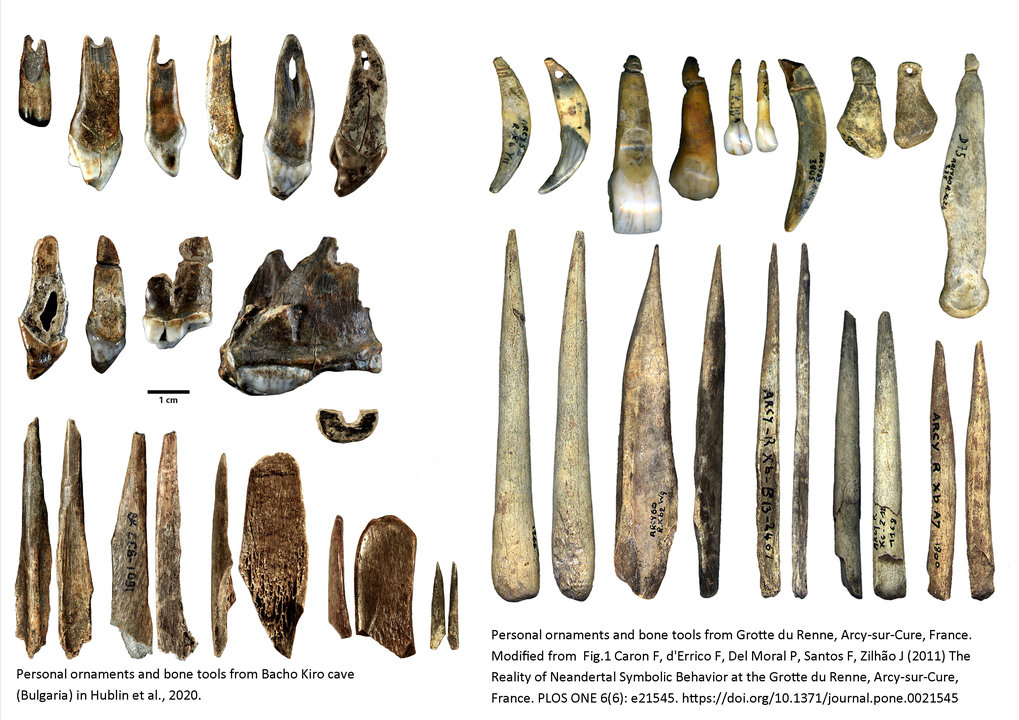 "The Initial Upper Paleolithic in Bacho Kiro Cave is the earliest known Upper Palaeolithic in Europe. It represents a new way of making stone tools and new sets of behaviour including manufacturing personal ornaments that are a departure from what we know of Neanderthals up to this time”, says Tsenka Tsanova of the Department of Human Evolution at the Max Planck Institute for Evolutionary Anthropology. “The Initial Upper Paleolithic probably has its origin in southwest Asia and soon after can be found from Bacho Kiro Cave in Bulgaria to sites in Mongolia as Homo sapiens rapidly dispersed across Eurasia and encountered, influenced, and eventually replaced existing archaic populations of Neanderthals and Denisovans.”