The sea level in the Bering Strait at the Last Glacial Maximum (20,000 years ago) versus today. Note the intricate archipelago that was present in the past but not today. Its islands (outlined in red) might have served as stepping stones for the first settlers crossing from Asia to North American. 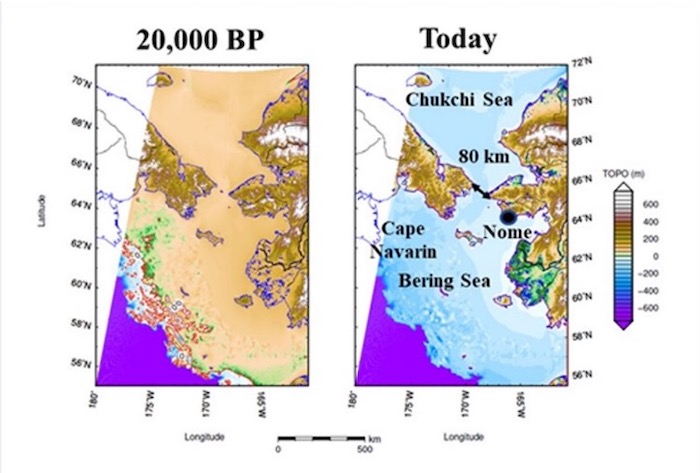 Today, sea-level rise is a great concern of humanity as climate change warms the planet and melts ice sheets in Greenland and Antarctica. Indeed, great coastal cities around the world like Miami and New Orleans could be underwater later in this century.

The sea level in the Bosporus and Dardanelles at the Last Glacial Maximum (20,000 years ago) versus today. Note that 20,000 years ago one-third of the route from the Black Sea to the Aegean Sea was occupied by a deep lake, which would have interrupted the portage and might have encouraged human settlement at each of its ends.

But oceans have been rising for thousands of years, and this isn’t the first time they have claimed land once settled by people. A new paper published in Geographical Review shows evidence vital to understanding human prehistory beneath the seas in places that were dry during the Last Glacial Maximum. Indeed, this paper informs one of the “hottest mysteries” in science: the debate over when the first Asians peopled North America.

The researchers behind the paper studied “choke points” — narrow land corridors, called isthmuses but often better known for the canals that cross them, or constricted ocean passages, called straits. Typically isthmuses would have been wider 20,000 years ago due to lower sea levels, and some straits did not even exist back then.

Sea level surrounding the Isthmus of Suez at the Last Glacial Maximum (20,000 years ago) versus today. Note that the Gulf of Suez was dry land 20,000 years ago, making the portage 3 1/2 times as long as today’s crossing. 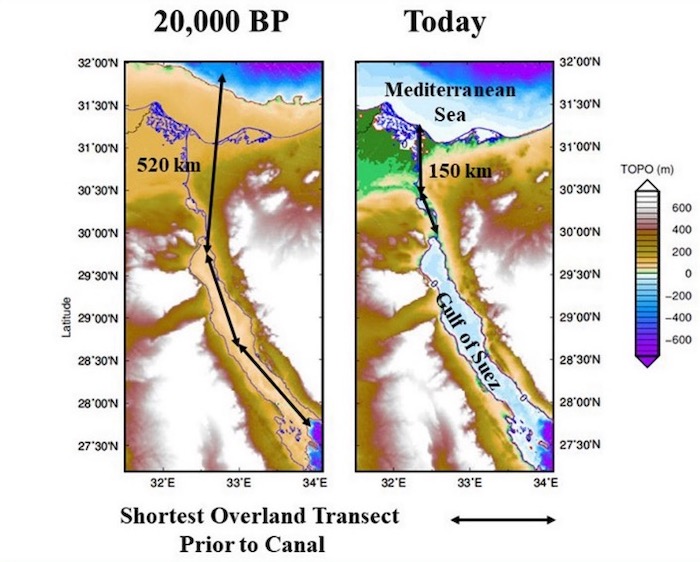 “We looked at nine global choke points — Bering Strait, Isthmus of Panama, Bosporus and Dardanelles, Strait of Gibraltar, straits of Sicily and Messina, Isthmus of Suez, Bab al Mandab, Strait of Hormuz and Strait of Malacca — to see what each was like 20,000 years ago when more water was tied up in ice sheets and glaciers,” said lead author Jerry Dobson, professor emeritus of geography at the University of Kansas and president emeritus of the American Geographical Society. “During the Last Glacial Maximum, the ocean surface was 410 feet lower than today. So, worldwide the amount of land that has been lost since the glaciers melted is equivalent to South America.”

Dobson has urged dedicated study of this land lost to the sea — an area of archeological interest he dubs “aquaterra” — and he thinks global choke points are the best places to begin.

“Look at these same choke points today — watch the nightly news,” he said. “They’re centers of ongoing conflict. Notice how the Strait of Hormuz controls the international flow of oil and sparks conflicts. The United States almost went to war a few months ago in a faceoff with Iran over shipping through that choke point. Or, look at the Suez Canal and the role it played in the Suez Crisis of 1956 and Six-Day War of 1967. Choke points, particularly straits, are pivotal to conflicts.”

Startling revelations confronted the three authors in all nine regions. In the Bering Strait between Asia and Alaska, for instance, their data led to a “totally new hypothesis” about how people likely migrated across from Siberia to North America. Science writer Fen Montaigne calls it “one of the greatest mysteries of our time . . . when humans made the first bold journey to the Americas.” The new study found many unknown, transitory islands that would have acted like stepping stones luring travelers eastward.

“In the Bering Strait only a handful of islands exist today — but there were literally scores of them at the Last Glacial Maximum,” Dobson said. “They started appearing at least 30,000 years ago, and Siberia probably had people about 30,000 to 40,000 years ago. They formed from west to east and then inundated from west to east, which would have pushed them all the way to Alaska. The first islands appeared close enough that Asians could have seen some of them from shore. People might have been lured out to them. Then, more islands kept appearing to their east, so they moved farther step by step. Eventually, even the newest islands were lost to inundation — so people were forced ultimately to North America.”

On the Isthmus of Suez, the portage between the Red Sea and Mediterranean Sea, where the Suez Canal lies today, would have been 3.5 times as long at Last Glacial Maximum as it was just prior to construction of the canal. The crossing likely would have been displaced by a western route from Foul Bay, Egypt, to the first cataract of the Nile, thence downriver to the Mediterranean Sea.

The Black Sea was cut off from the world ocean as the sea level dropped below the Bosporus and Dardanelles. Rather than today’s saltwater channel of 300 kilometers, there was an overland route of 220 miles, one-third of which was a deep lake now submerged beneath the Sea of Marmara. In response, now submerged settlements may have existed west of the current mouth of the Dardanelles, offshore near the eastern end of the Gulf of Soros, and beside the eastern and western ends of the Sea of Marmara.

The straits of Sicily and Messina almost severed the Mediterranean Sea into two separate seas divided 32 miles then versus 88 miles today. The LGM map shows additional islands and coastal plains in an area already known for early settlement. For instance, a 39 feet long, carved monolith at 130 feet depth recently discovered by underwater archeologists proves humans occupied the place about 10,000 years ago.

The KU researcher co-wrote the new study with Giorgio Spada and Gaia Galassi of Urbino University, ocean scientists who applied glacial isostatic adjustment (GIA) models, accounting for deformation and gravity variations in the sea floor caused by glacial melting and sea-level rise, in order to reconstruct the variation in paleo-topography for the past 30,000 years. Their work yielded much more accurate spacial and temporal resolution as to where land was exposed during the Last Glacial Maximum.

“We have lost an area equivalent to South America in size,” Dobson said. “That is an enormous amount of land, and it’s even better on average than any continent today. It was all coastal, all flat, and mostly tropical. We have a much better estimate of the size now than we did a few years ago. The difference is because of this new way we calculate sea level. The new model considers how the ocean bottom shifts in response to the weight of the water.”

Coastal areas during the Last Glacial Maximum likely would have attracted people, as coastal lands do today. Dobson said archeological exploration is needed to search for boats, ports and settlements – evidence that could revolutionize conceptions of human migration and know-how at that time.

“How much technology was there?” he said. “Were there boats? No boats have ever been found that were that old, but we know people made it from Southeast Asia to Australia 65,000 years ago. So, anthropologists surmise they must have had boats. Even when sea level was at its lowest, the individual hops they had to make were long enough that it would seem likely they had boats. In the new article, we study the history of boats of all kinds based on research published in reputable scientific journals. Maritime travel goes surprisingly far back. So now, what kind of evidence can we find of ports? No one has ever claimed evidence of ports that far back. Of course, ports on coasts 400 feet lower than today would be hard to find, and precious little underwater archaeology has been conducted at that depth. We need to treat boats and ports as unknown and look for the evidence rather than proclaiming whether it did or did not happen.”

The KU researcher said choke points should be of interest to geographers, ocean scientists, underwater archeologists, anthropologists and oceanographers because they provide “strategic insights on where to search for submerged evidence of human settlement.”

“It’s a matter of efficiency,” Dobson said. “To understand maritime travel and associated settlements long ago, we can search whole oceans. Underwater searches are expensive, however, so little territory gets searched. Finds are rare because artifacts are few and far between. Choke points funnel travel into narrow corridors, and logically that concentrates the artifacts as well. If there is any evidence, that’s where we most likely will find it.”