A surprising discovery about the first creatures to venture onto land, known as tetrapods, has been made.

Superbly preserved fossils from Russia, cast new and surprising light on one of the earliest tetrapods - the group of animals that made the evolutionary transition from water to land and ultimately became the ancestors not just of amphibians, reptiles, birds and mammals, but of ourselves.  The fossils were  excavated with support of a grant from the National Geographic Society and described by an international team in the leading scientific journal Nature,

Tetrapods evolved from a group of animals known as the Tetrapodomorpha which, in turn, evolved from ancient Sarcopterygii (lobe-finned fishes) around 390 million years ago in the middle Devonian period; their forms were transitional between lobe-finned fishes and the four-limbed tetrapods. The first tetrapods (from a traditional, apomorphy-based perspective) appeared by the late Devonian, 367.5 million years ago, according to Wikipedia

This is the Sosnogorsk lagoon just before a deadly storm. 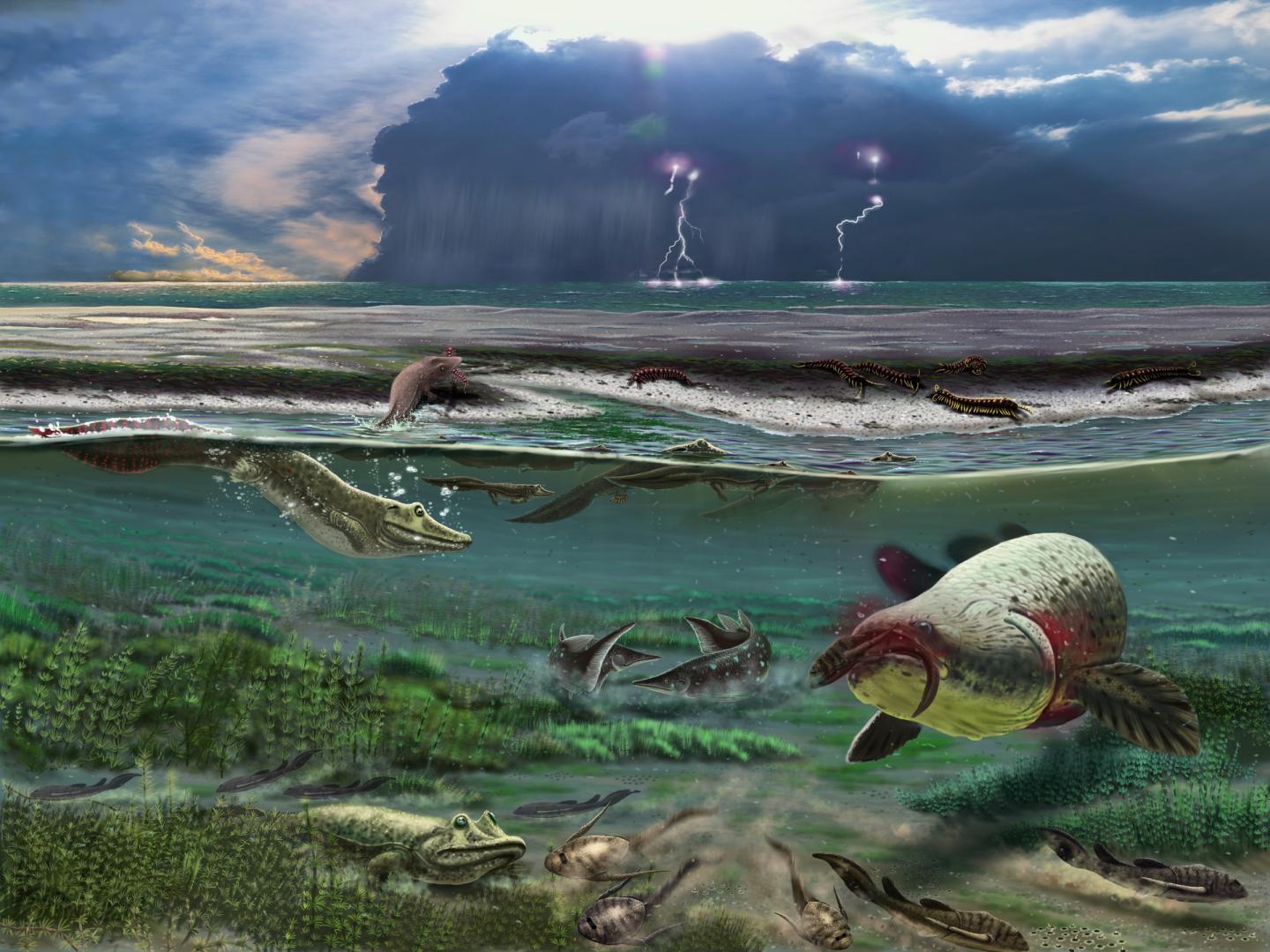 The first tetrapods evolved from fishes during the Devonian period, which ended about 360 million years ago. For many decades, our idea of what Devonian tetrapods were like have been based on just a few genera, chiefly Ichthyostega and Acanthostega, which are known from near-complete skeletons. Most other Devonian tetrapods are known only from a few scraps of jaws or limb bones: enough to show that they existed, but not really enough to tell us anything useful.

Furthermore, Ichthyostega and Acanthostega lived at the very end of the Devonian. Some of the fragmentary tetrapods are a lot older, up to 373 million years old, and the oldest fossil tetrapod footprints date back a whopping 390 million years. So Devonian tetrapods have a long early history about which, until now, we have known very little. This is a frustrating picture, considering that we are dealing with one of the most important events in the history of the backboned animals

Tetrapod dentary in a rock matrix. Superbly preserved fossils from Russia, excavated with support of a grant from the National Geographic Society and described today by an international team in the leading scientific journal Nature, cast new and surprising light on one of the earliest tetrapods -- the group of animals that made the evolutionary transition from water to land and ultimately became the ancestors not just of amphibians, reptiles, birds and mammals, but of ourselves. 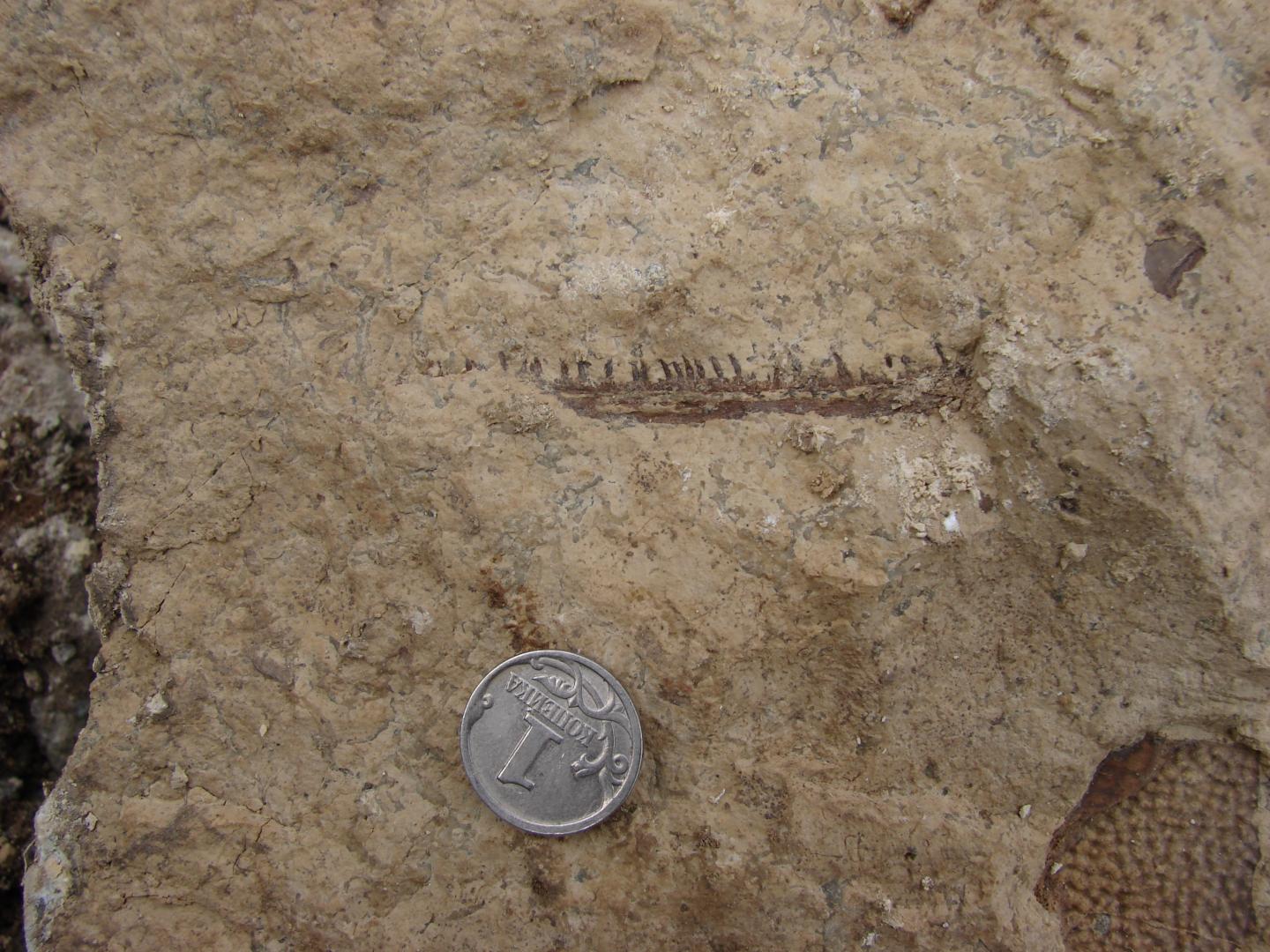 The new Russian tetrapod, Parmastega aelidae, changes all this. At 372 million years old, its fossils are only marginally younger than the oldest fragmentary tetrapod bones. They come from the Sosnogorsk Formation, a limestone formed in a tropical coastal lagoon, which is now exposed on the banks of the Izhma River near the city of Ukhta in the Komi Republic of European Russia. But these are no mere fragments: when the limestone is dissolved with acetic acid, out come perfectly preserved bones from the head and shoulder girdle - more than 100 so far - which can be pieced together into a three-dimensional reconstruction of the animal, by far the earliest for any tetrapod. Large and small individuals are found, the biggest with a head length of about 27 cm. Fish-like characteristics in some bones indicate that this is not only the earliest but also the most primitive of the well-preserved Devonian tetrapods.

This is the right bank of the Izhma River, a type locality of the new Devonian tetrapod Parmastega aelidae. 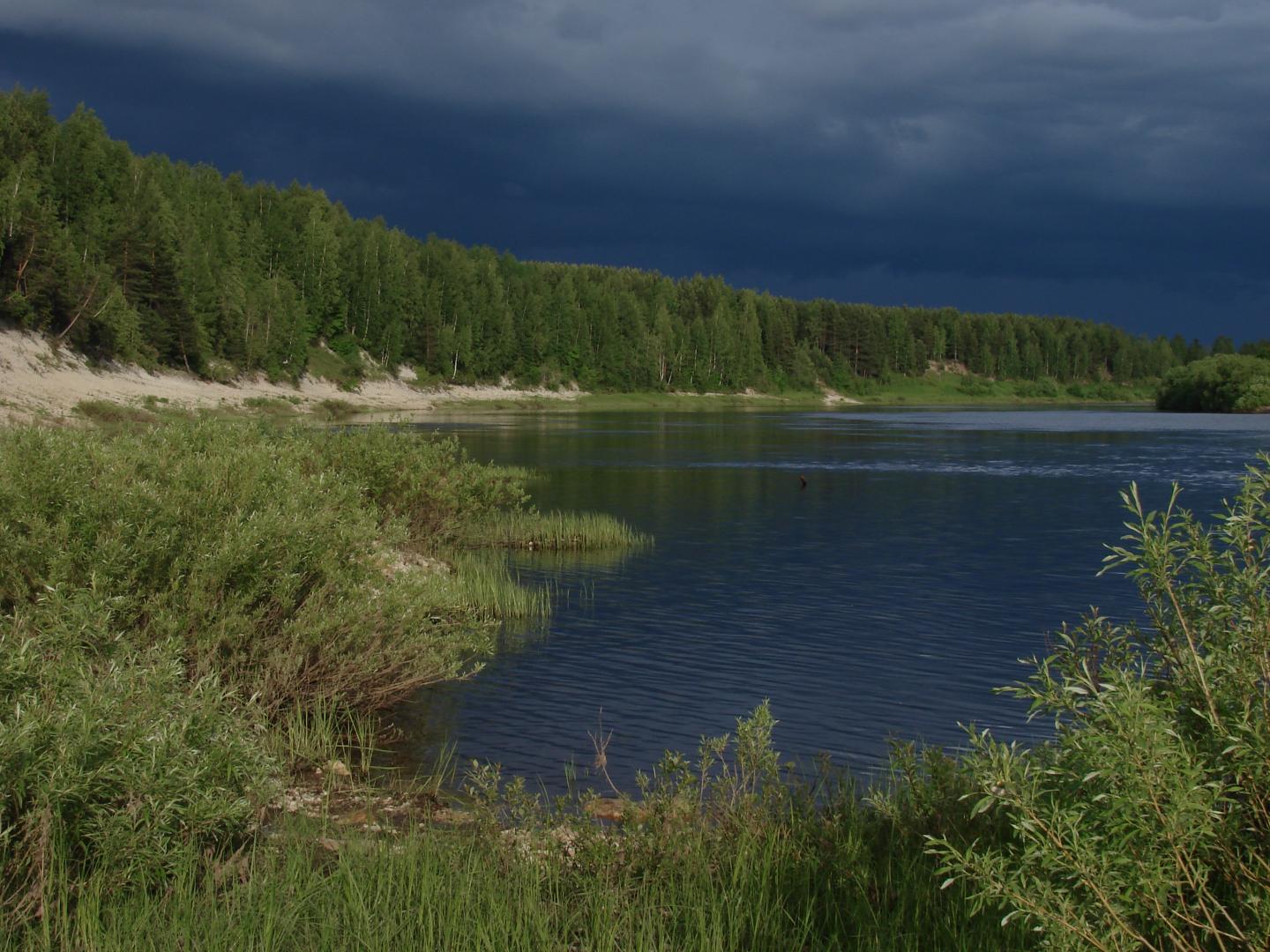 And what a strange creature it is! Like other Devonian tetrapods, Parmastega is vaguely crocodile-like in shape, but its eyes are raised above the top of the head, and the curve of its snout and lower jaw create a disconcerting 'grin' that reveals its formidable teeth. A clue to its lifestyle is provided by the lateral line canals, sensory organs for detecting vibrations in the water, which Parmastega inherited from its fish ancestors. These canals are well-developed on the lower jaw, the snout and the sides of the face, but they die out on top of the head behind the eyes. This probably means that it spent a lot of time hanging around at the surface of the water, with the top of the head just awash and the eyes protruding into the air. But why? Crocodiles do this today, because they are keeping an eye out for land animals that they might want to catch. We don't know very much about the land that surrounded Parmastega's lagoon, but there may have been large arthropods such as millipedes or 'sea scorpions' to catch at the water's edge. The slender, elastic lower jaw certainly looks well-suited to scooping prey off the ground, its needle-like teeth contrasting with the robust fangs of the upper jaw that would have been driven into the prey by the body weight of Parmastega.

However, the fossil material springs one final surprise: the shoulder girdle was made partly from cartilage, which is softer than bone, and the vertebral column and limbs may have been entirely cartilaginous as they are not preserved. This strongly suggests that Parmastega, with its crocodile-like head and protruding eyes, never really left the water. Did it creep up on prey at the water's edge and surge onto the shore to seize it in its jaws, only to then slide back into the supporting embrace of the water? We don't know. Far from presenting a progressive cavalcade of ever more land-adapted animals, the origin of tetrapods is looking more and more like a tangled bush of ecological experimentation.