Radicalized and Believing in Conspiracies: Can the Cycle Be Broken?

If your idea of conspiracy theories entails aliens, UFOs, governmental cover-ups at Roswell Air Force base, and the melody of The X-Files--you're not alone. That was, indeed, the classic notion, says Scott Tyson, an assistant professor of political science at the University of Rochester.

But over the course of the last five years, he noticed a watershed. For starters, the term "theory" no longer applied to the convoluted ideas spouted by today's conspiracist groups such as QAnon, the Proud Boys, and the Oath Keepers, all of whom Tyson calls largely "theoryless."
While radical assertions of a “deep state” and “stolen elections” have long bubbled quietly underneath public discourse, Rochester political scientist Scott Tyson says during the last five years, the ideas have moved into the mainstream discourse. 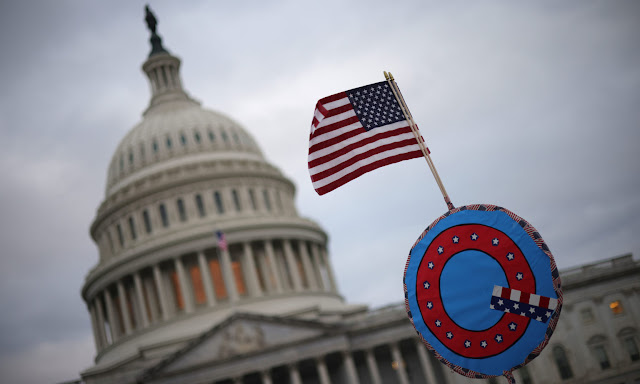 For example, Tyson, a game theorist whose research focuses on authoritarian politics, conspiracies, and radicalization, points out that those who believe erroneously that former President Donald Trump's "victory was stolen," usually do not believe that votes cast on that same ballot for successful Republican congressional candidates have been tampered with.

Yet, these conspiracies have entered the mainstream discourse and are driving the growing radicalization of average Americans that manifested itself most visibly in the storming of the US Capitol on January 6, he says.

In a recent study, "Sowing the Seeds: Radicalization as a Political Tool" published in the American Journal of Political Science, Tyson--together with University of Michigan coauthor Todd Lehmann--looks at two common policy interventions--economic and psychological--designed to counter the growing radicalization among the US population.

The duo finds that improving economic conditions reduces both radicalization efforts and dissent. However, trying to render people psychologically less susceptible to radicalization attempts can backfire and instead increase the efforts by radical leaders to influence and radicalize more followers.

While radical assertions of a "deep state" and "stolen elections" have long bubbled quietly beneath the public discourse, Tyson says those ideas have now moved into the mainstream. That shift--from fringe to center stage--Tyson argues, happened during the Trump presidency.

What's the nutshell definition of "radicalization"?

"Radicalization" is used interchangeably with "indoctrination." Essentially, it's creating self-motivation among people to do certain things. You would call someone radicalized when those things that you would normally have to motivate someone to do--you don't have to do anymore because they've become self-motivated. That's where conspiracism comes in--it restructures the way that people perceive the social world around them. Radicalization involves an element of extremism and is fundamentally a political thought with an ecosystem to it: there needs to be a political group, or a set of political leaders who are trying to restructure people's beliefs or their values in such a way that it helps their own political goals or causes.

How can radicalization be countered?

The way to combat it is not to hope for the easy solution. It's a false idea that we can just take out the leaders and it'll all go away, akin to simply cutting off the head off the snake. That doesn't actually work. You have to go from the bottom up to start trying to siphon off radicalized people, and treat the organization more as a terrorist group, in terms of any hearts and minds policies.

Does leadership "decapitation" work against a radical group such as QAnon?

We looked in our research at what happens when you threaten leadership decapitation and found that you actually provide an incentive for leaders to increase their efforts to radicalize others. The reason is very simple: if we think of radicalized people as having the self-motivation to do things against the government--whether it's protests, attacks, or to bomb things--if more people become radicalized the actual leaders are less important in these kinds of antigovernment actions. Our theory suggests that leaders are less important in the actual production of antigovernment actions, so that the government is essentially forced to divert attention from the leaders and toward these other threats. The leaders intentionally take away from their own control.

Why were conspiracies able to enter the American mainstream so pervasively?

Trump was incredibly important in giving a megaphone to conspiracists who had been on the fringe beforehand until he became a political force and essentially weaponized a lot of those ideas. When Trump unleashed all these conspiracies on the public--many people didn't know that they were really fringe ideas. One other reason they were able to spread so quickly is our so-called "media ecosystem." We have media outlets like Fox News, OAN, and Newsmax who are perfectly willing to spout conspiracies. When it all started back in 2015, the mainstream media wasn't ready to deal with this kind of weaponization. That's why conspiracists were able to misuse the mainstream media to essentially launder their claims: the conspiracists would make a bunch of unfounded assertions and accusations, which the mainstream media would pick up in turn to report on. Part of the debunking, however, was retelling the untrue story. That way a lot of these conspiracy narratives ended up reaching a much larger audience.

What role did the pandemic play in the spread of conspiracies and the radicalization of US citizens?

QAnon was around before the pandemic, and the radicalization campaigns of far-right groups were already under way beforehand. But it certainly accelerated these efforts and made them more effective. Because of the pandemic people were more isolated, which means they were talking to fewer people, and the echo chamber became narrower. That in turn, made people more susceptible to becoming radicalized. It's very similar to how cults recruit people: they isolate them from their family and friends who are not involved in the cult. They keep new recruits in that echo chamber long enough until they've been able to radicalize them. The number of QAnon members and radicalized people through other far-right groups today would be much, much lower if the pandemic hadn't forced us all to isolate in the way that it did.