A more reliable way of estimating the size of megalodon shows the extinct shark may have been bigger than previously thought, measuring up to 65 feet, nearly the length of two school buses. Earlier studies had ball-parked the massive predator at about 50 to 60 feet long.

The revised estimate is the result of new equations based on the width of megalodon’s teeth – and began with a high school lesson that went awry.

Victor Perez, then a doctoral student at the Florida Museum of Natural History, was guiding students through a math exercise that used 3D-printed replicas of fossil teeth from a real megalodon and a set of commonly used equations based on tooth height to estimate the shark’s size. But something was off: Students’ calculations ranged from about 40 to 148 feet for the same shark. Perez snapped into trouble-shooting mode.

“I was going around, checking, like, did you use the wrong equation? Did you forget to convert your units?” said Perez, the study’s lead author and now the assistant curator of paleontology at the Calvert Marine Museum in Maryland. “But it very quickly became clear that it was not the students that had made the error. It was simply that the equations were not as accurate as we had predicted.”

Although the equations have been widely used by scientists since their publication in 2002, the classroom exercise revealed they generate varying size estimates for a single shark, depending on which tooth is measured.

“I was really surprised,” Perez said. “I think a lot of people had seen that study and blindly accepted the equations.”
Sharks' jaws are made of cartilage, the same flexible tissue found in the noses and ears of humans. Cartilage breaks down quickly after death, but tooth enamel is extremely durable and preserves well, Perez said.FLORIDA MUSEUM PHOTO BY KRISTEN GRACE


The most accepted methods for estimating the length of megalodon have used great white sharks as a modern proxy, relying on the relationship between tooth size to total body length. While great white sharks and megalodon belong to different families, they share similar predatory lifestyles and broad, triangular teeth serrated like steak knives – ideal adaptations for hunting large, fleshy marine mammals such as whales and dolphins, Perez said.

But these methods also present a challenge: To generate body length estimates, they require the researcher to correctly identify a fossil tooth’s former position in a megalodon jaw. As in humans, the size and shape of shark teeth vary depending on where they’re located in the mouth, and megalodon teeth are most often found as standalone fossils.
Megalodon teeth can be up to 7 inches long and were specialized for feeding on large, fleshy prey, such as whales and dolphins. 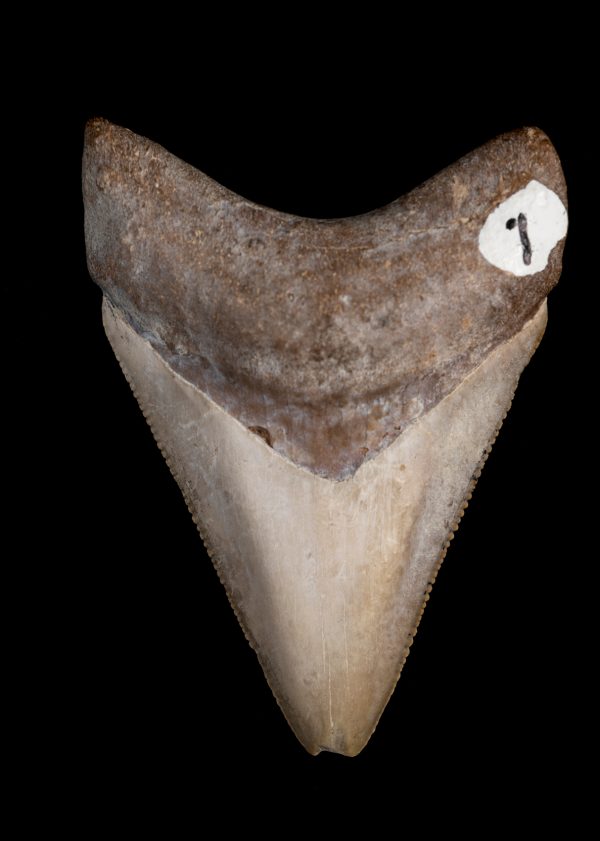 So, Perez was ecstatic when fossil collector Gordon Hubbell donated a nearly complete set of teeth from the same megalodon shark to the Florida Museum in 2015, reducing the guesswork. After museum researchers CT scanned the teeth and made them available online, Perez collaborated with teacher Megan Higbee Hendrickson on a plan to incorporate them into her middle school curriculum at the Academy of the Holy Names school in Tampa.
Vertebrate paleontologist Victor Perez began collecting fossils when he was 6 years old. After completing his Ph.D. at the Florida Museum of Natural History, he became assistant curator at the Calvert Marine Museum where he first became fascinated with megalodon as a child. "It definitely feels a little surreal," he said. 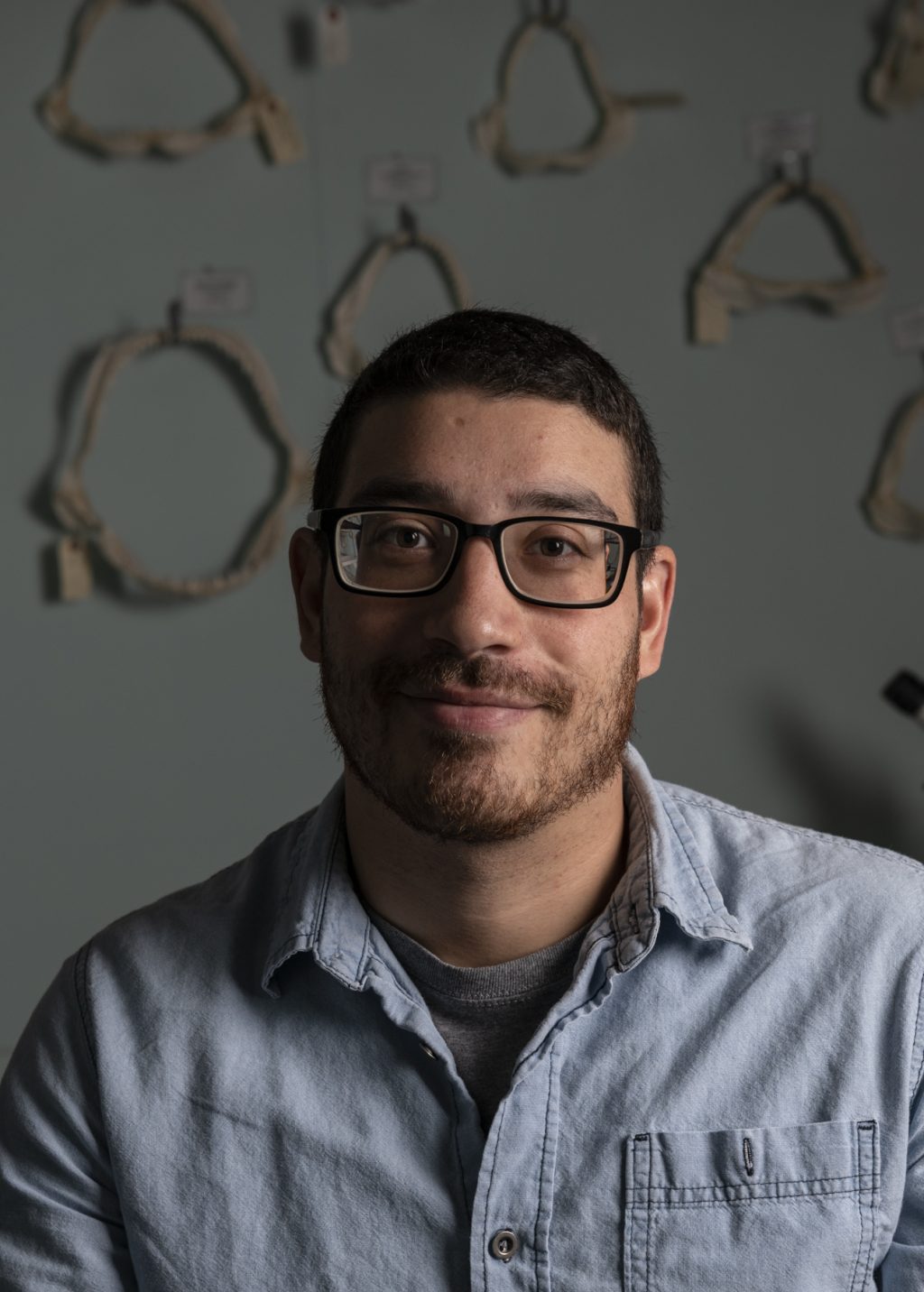 FLORIDA MUSEUM PHOTO BY KRISTEN GRACE
“We decided to have the kids 3D-print the teeth, determine the size of the shark and build a replica of its jaw for our art show,” Hendrickson said.

Perez and Hendrickson co-designed a lesson for students based on the then-most popular method for estimating shark size: Match the tooth to its position in the shark jaw, look up the corresponding equation, measure the tooth from the tip of the crown to the line where root and crown meet and plug the number into the equation.

After a successful pilot test of a few teeth with Hendrickson’s students, he expanded the lesson plan to include the whole set of megalodon teeth for high school students at Delta Charter High School in Aptos, California. Perez expected a slight variability of a couple millimeters in their results, but this time, variations in students’ estimates shot to more than 100 feet. The farther a tooth position was from the front of the jaw, the larger the size estimate.

After Perez detailed the lesson’s results in a fossil community newsletter, he received an email from Teddy Badaut, an avocational paleontologist in France. Badaut suggested a different approach. Why not measure tooth width instead of height? Previous research had suggested tooth width was limited by the size of a shark’s jaw, which would be proportional to its body length.

Ronny Maik Leder, then a postdoctoral researcher at the Florida Museum, worked with Perez to develop a new set of equations based on tooth width.

By measuring the set of teeth from Hubbell, “we could actually sum up the width of the teeth and get an even better approximation of the jaw width,” Perez said.

IMAGE COURTESY OF TIM SCHEIRER/CALVERT MARINE MUSEUM
When megalodon was first described as a species, scientists thought it was the direct ancestor of the great white shark. Although the two species have similar teeth and feeding habits, they last shared a common ancestor about 60 million years ago, Perez said.

By measuring the combined width of each tooth in a row, they developed a model for how wide an individual tooth was in relation to the jaw for a given species. Now when a paleontologist unearths a lone megalodon tooth the size of their hand, they can compare its width to the average obtained in the study and get an accurate estimate of how big the shark was.

“I was quite surprised that indeed no one had thought of this before,” said Leder, now director of the Natural History Museum in Leipzig, Germany. “The simple beauty of this method must have been too obvious to be seen. Our model was much more stable than previous approaches. This collaboration was a wonderful example of why working with amateur and hobby paleontologists is so important.”

Perez cautioned that because individual sharks vary in size, the team’s methods still have a range of error of about 10 feet when applied to the largest individuals. It’s also unclear exactly how wide megalodon’s jaw was and difficult to guess based on teeth alone – some shark species have gaps between each tooth while the teeth in other species overlap.

“Even though this potentially advances our understanding, we haven’t really settled the question of how big megalodon was. There’s still more that could be done, but that would probably require finding a complete skeleton at this point,” he said.
Excavated from North Carolina, these 46 fossils comprise the most complete set of megalodon teeth found. Students printed 3D replicas of the teeth and used them to estimate megalodon’s length.

Perez continues to teach the megalodon tooth lesson, but its focus has changed.

“Since then, we’ve used the lesson to talk about the nature of science – the fact that we don’t know everything. There are still unanswered questions,” he said.

For Hendrickson, the lesson sparked her students’ enthusiasm for science in ways that textbooks could not.

“Victor was an amazing role model for the kids. He is the personification of a young scientist that followed his childhood interest and made a career out of it. So many of these kids had never worked with or spoken to a scientist who respected their point of view and was willing to answer their questions.”

The research was published in the open-access journal Palaeontologia Electronica.

Leder and Badaut co-authored the study.