Image: Glacial Isostatic Adjustment (GIA) reconstructions of Beringia at 30,000 BP (as early as ice history data go), 20,500 BP (Last Glacial Maximum), 10,500 BP (just before the Bering Strait opened) and 8000 BP (shortly before inundation was complete). Potential kelp habitat is highlighted in bright red at depths of 3 to 20 m, which are suitable for bull kelp wherever rocky bottom may occur. 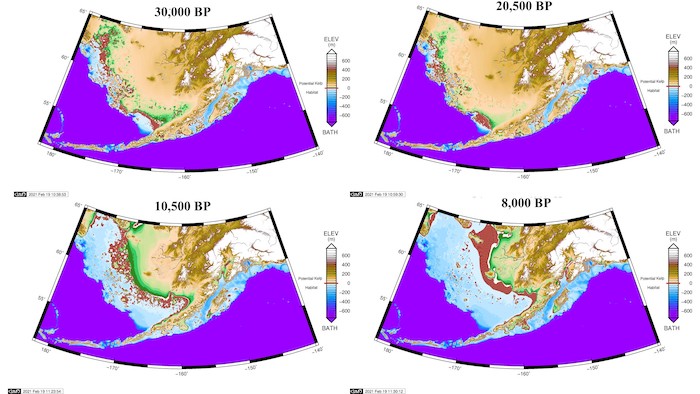 For thousands of years during the last ice age, generations of maritime migrants paddled skin boats eastward across shallow ocean waters from Asia to present-day Alaska. They voyaged from island to island and ultimately to shore, surviving on bountiful seaweeds, fish, shellfish, birds and game harvested from coastal and nearshore biomes. Their island-rich route was possible due to a shifting archipelago that stretched almost 900 miles from one continent to the other.


A new study from the University of Kansas in partnership with universities in Bologna and Urbino, Italy, documents the newly named Bering Transitory Archipelago and then points to how, when and where the first Americans may have crossed. The authors’ stepping-stones hypothesis depends on scores of islands that emerged during the last ice age as sea level fell when ocean waters were locked in glaciers and later rose when ice sheets melted. The two-part study, just published in the open-access journal Comptes Rendus Geoscience, may answer what writer Fen Montaigne calls “one of the greatest mysteries of our time . . . when humans made the first bold journey to the Americas.”

The “stepping-stones” idea hinges on retrospective mapping of sea levels while accounting for isostacy — deformation of the Earth’s crust due to the changing depth and weight of ice and water, reaching its greatest extreme during the Last Glacial Maximum about 20,500 years ago.

“We digitally discovered a geographic feature of considerable size that had never been properly documented in scientific literature,” said principal author Jerome Dobson, professor emeritus of geography at KU. “We named it the Bering Transitory Archipelago; it existed from about 30,000 years ago through 8,000 years ago. When we saw it, we immediately thought, ‘Wow, maybe that's how the first Americans came across.’ And, in fact, everything we’ve tested seems to bear that out — it does seem to be true.”

For more than a decade, researchers have pondered a mystery within a mystery. Mitochondrial DNA indicates that migrants were isolated somewhere for up to 15,000 years on their way over from Asia to North America. The Beringian Standstill Hypothesis arises from the fact that today Native American DNA is quite different from Asian DNA, a clear indication of genetic drift of such magnitude that it can only have happened over long periods of time in nearly complete isolation from the Asian source population. The Bering Transitory Archipelago provides a suitable refugium with internal connectivity and outward isolation.

Dobson said people crossing the Bering Sea probably didn’t have sails but could have been experienced in paddling skin boats like the kayaks and umiaks that Inuits use today.

“They probably traveled in small groups,” he said, “either from Asia or islands off the coast of Asia. Some maritime people are known to have existed 27,000 years ago on northern Japanese islands. They probably were maritime people — not just living on islands, but actually practicing maritime culture, economy and travel.”

Dobson recently received the American Geographical Society’s Cullum Geographical Medal (the same gold medal that Neil Armstrong won for flying to the moon and Rachel Carson won for writing “Silent Spring”). He named and continuously champions “aquaterra” — all lands that were exposed and inundated repeatedly during the Late Pleistocene ice ages — thus creating a zone of archeological promise scattered offshore from all coastal regions around the globe.

Recently, Dobson and co-authors Giorgio Spada of the University of Bologna and Gaia Galassi of Urbino University “Carlo Bo” applied an improved Glacial Isostatic Adjustment model to nine global choke points, meaning isthmuses and straits that have funneled transport and trade throughout history. Significant human migrations are known to have occurred across some of them, including “Beringia”— all portions of the Bering Sea that were exposed before, during and after the Last Glacial Maximum.

“These Italian ocean scientists read my ‘Aquaterra’ paper and took it upon themselves to refine the boundaries of aquaterra for the whole world at coarse resolution and for Beringia itself at fine resolution,” Dobson said. “Later we agreed to join forces and tackle those nine global choke points. At the end of that study, we suddenly spotted these islands in the Bering Sea, and that became our focus. This had an immediate potential because it could be a real game-changer in terms of all sciences understanding how migration worked in the past. We found startling results in certain other choke points and have begun analyzing them as well.”

In Beringia, the three investigators contend, this action produced a “conveyor belt” of islands that rose from the sea and fell back again, pushing bands of people eastward. “The first islands to appear were just off the coast of Siberia,” the KU researcher said. “Then islands appeared ever eastward. Most likely migrants kept expanding eastward, too, generally to islands within view and an easy paddle away.”

By 10,500 years ago, when the Bering Strait itself first appeared, almost all islands in the west had submerged. Only three islands remained, and paddling distances had increased accordingly. Thus, occupants were forced to evacuate, and they faced a clear choice: return to Asia, which they knew to be populated and may even have left due to population pressures and resource constraints, or paddle east to less known territory, perhaps less populated islands with ample resources.

To fully confirm the idea set forth in the new paper, Dobson said researchers from many fields will need to collaborate as one geographer and two ocean scientists have done here.

“We ourselves are at a stage where we definitely need underwater confirmation,” he said. “No doubt underwater archaeologists by title will prevail in that quest, but other disciplines, specialties and fields are essential. Working together plus scouring diverse literature, we presented a fundamentally new physical geography for scientists to contemplate. That should entice every relevant discipline to question conventional theory and explore new ideas regarding how, when and where people came to North America. More broadly, aquaterra can serve as a unifying theme for understanding human migrations, demic expansions, evolutionary biology, culture, settlement and endless other topics.”

Contacts and sources:
Brendan M. Lynch
The University of Kansas