Auroral displays continue to intrigue scientists, whether the bright lights shine over Earth or over another planet. The lights hold clues to the makeup of a planet’s magnetic field and how that field operates.

New research about Jupiter proves that point — and adds to the intrigue. 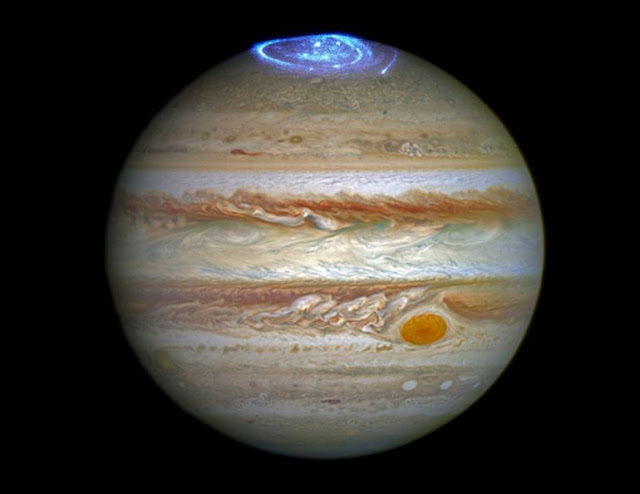 Credit: NASA
Peter Delamere, a professor of space physics at the University of Alaska Fairbanks Geophysical Institute, is among an international team of 13 researchers who have made a key discovery related to the aurora of our solar system’s largest planet.

The team’s work was published April 9, 2021, in the journal Science Advances. The research paper, titled “How Jupiter’s unusual magnetospheric topology structures its aurora,” was written by Binzheng Zhang of the Department of Earth Sciences at the University of Hong Kong; Delamere is the primary co-author.

Research done with a newly developed global magnetohydrodynamic model of Jupiter's magnetosphere provides evidence in support of a previously controversial and criticized idea that Delamere and researcher Fran Bagenal of the University of Colorado at Boulder put forward in a 2010 paper — that Jupiter’s polar cap is threaded in part with closed magnetic field lines rather than entirely with open magnetic field lines, as is the case with most other planets in our solar system.

“We as a community tend to polarize — either open or closed — and couldn’t imagine a solution where it was a little of both,” said Delamere, who has been studying Jupiter since 2000. “Yet in hindsight, that is exactly what the aurora was revealing to us.”

Open lines are those that emanate from a planet but trail off into space away from the sun instead of reconnecting with a corresponding location in the opposite hemisphere.

On Earth, for example, the aurora appears on closed field lines around an area referred to as the auroral oval. It’s the high latitude ring near — but not at — each end of Earth’s magnetic axis.
Within that ring on Earth, however, and as with some other planets in our solar system, is an empty spot referred to as the polar cap. It’s a place where magnetic field lines stream out unconnected — and where the aurorae rarely appear because of it. Think of it like an incomplete electrical circuit in your home: No complete circuit, no lights.

Jupiter, however, has a polar cap in which the aurora dazzles. That puzzled scientists. 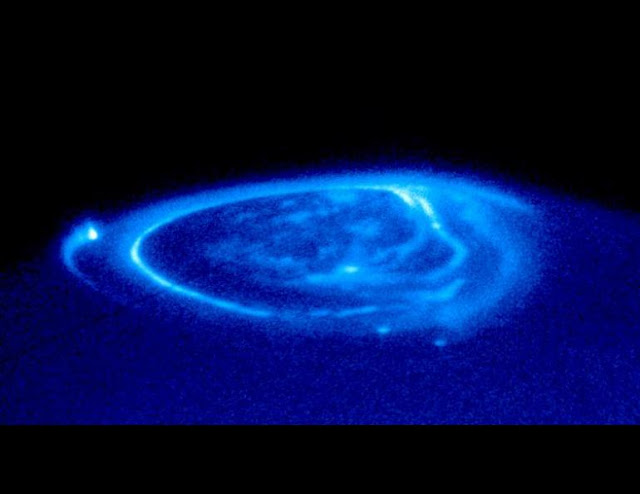 Credit: NASA
The problem, Delamere said, is that researchers were so Earth-centric in their thinking about Jupiter because of what they had learned about Earth’s own magnetic fields.

The arrival at Jupiter of NASA’s Juno spacecraft in July 2016 provided images of the polar cap and aurora. But those images, along with some captured by the Hubble Space Telescope, couldn’t resolve the disagreement among scientists about open lines versus closed lines.

So Delamere and the rest of the research team used computer modeling for help. Their research revealed a largely closed polar region with a small crescent-shaped area of open flux, accounting for only about 9 percent of the polar cap region. The rest was active with aurora, signifying closed magnetic field lines.

Jupiter, it turns out, possesses a mix of open and closed lines in its polar caps.

“There was no model or no understanding to explain how you could have a crescent of open flux like this simulation is producing,” he said. “It just never even entered my mind. I don't think anybody in the community could have imagined this solution. Yet this simulation has produced it.”

“To me, this is a major paradigm shift for the way that we understand magnetospheres.”

What else does this reveal? More work for researchers.

“It raises many questions about how the solar wind interacts with Jupiter’s magnetosphere and influences the dynamics,” Delamere said.

Jupiter’s aurorally active polar cap could, for example, be due to the rapidity of the planet’s rotation — once every 10 hours compared to Earth’s once every 24 hours — and the enormity of its magnetosphere. Both reduce the impact of the solar wind, meaning the polar cap magnetic field lines are less likely to be torn apart to become open lines.

And to what extent does Jupiter’s moon Io affect the magnetic lines within Jupiter’s polar cap? Io is electrodynamically linked to Jupiter, something unique in our solar system, and as such is constantly stripped of heavy ions by its parent planet.

As the paper notes, “The jury is still out on the magnetic structure of Jupiter’s magnetosphere and what exactly its aurora is telling us about its topology.”