Using a combination of telescopes, including the Very Large Telescope of the European Southern Observatory (ESO’s VLT), astronomers have revealed a system consisting of six exoplanets, five of which are locked in a rare rhythm around their central star. The researchers believe the system could provide important clues about how planets, including those in the Solar System, form and evolve.

This animation shows a representation of the orbits and movements of the planets in the TOI-178 system. New research by Adrien Leleu and his colleagues with several telescopes, including ESO’s Very Large Telescope, has revealed that the system boasts six exoplanets and that all but the one closest to the star are locked in a rare rhythm as they move in their orbits (represented in orange). In other words, they are in resonance. This means that there are patterns that repeat themselves rhythmically as the planets go around the star, with some planets aligning every few orbits.

In this artist’s animation, the rhythmic movement of the planets around the central star is represented through a musical harmony, created by attributing a note (in the pentatonic scale) to each of the planets in the resonance chain. This note plays when a planet completes either one full orbit or one half orbit; when planets align at these points in their orbits, they ring in resonance.
<iframe width="690" height="387" src="https://www.youtube.com/embed/-WevvRG9ysY" frameborder="0" allow="accelerometer; autoplay; clipboard-write; encrypted-media; gyroscope; picture-in-picture" allowfullscreen></iframe>
Credit: ESO/L. Calçada
The first time the team observed TOI-178, a star some 200 light-years away in the constellation of Sculptor, they thought they had spotted two planets going around it in the same orbit. However, a closer look revealed something entirely different. “Through further observations we realised that there were not two planets orbiting the star at roughly the same distance from it, but rather multiple planets in a very special configuration,” says Adrien Leleu from the Université de Genève and the University of Bern, Switzerland, who led a new study of the system published today in Astronomy & Astrophysics.

The new research has revealed that the system boasts six exoplanets and that all but the one closest to the star are locked in a rhythmic dance as they move in their orbits. In other words, they are in resonance. This means that there are patterns that repeat themselves as the planets go around the star, with some planets aligning every few orbits. A similar resonance is observed in the orbits of three of Jupiter’s moons: Io, Europa and Ganymede. Io, the closest of the three to Jupiter, completes four full orbits around Jupiter for every orbit that Ganymede, the furthest away, makes, and two full orbits for every orbit Europa makes.
An artist’s view of the TOI-178 planetary system 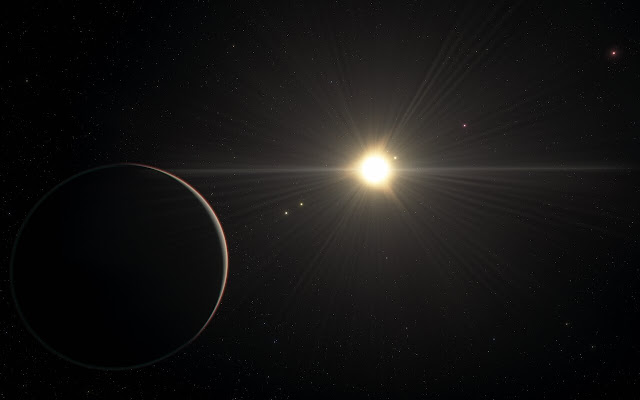 Credit: ESO/L. Calçada/spaceengine.org
The five outer exoplanets of the TOI-178 system follow a much more complex chain of resonance, one of the longest yet discovered in a system of planets. While the three Jupiter moons are in a 4:2:1 resonance, the five outer planets in the TOI-178 system follow a 18:9:6:4:3 chain: while the second planet from the star (the first in the resonance chain) completes 18 orbits, the third planet from the star (second in the chain) completes 9 orbits, and so on. In fact, the scientists initially only found five planets in the system, but by following this resonant rhythm they calculated where in its orbit an additional planet would be when they next had a window to observe the system.

More than just an orbital curiosity, this dance of resonant planets provides clues about the system’s past. “The orbits in this system are very well ordered, which tells us that this system has evolved quite gently since its birth,” explains co-author Yann Alibert from the University of Bern. If the system had been significantly disturbed earlier in its life, for example by a giant impact, this fragile configuration of orbits would not have survived.
Disorder in the rhythmic system

But even if the arrangement of the orbits is neat and well-ordered, the densities of the planets “are much more disorderly,” says Nathan Hara from the Université de Genève, Switzerland, who was also involved in the study. “It appears there is a planet as dense as the Earth right next to a very fluffy planet with half the density of Neptune, followed by a planet with the density of Neptune. It is not what we are used to.” In our Solar System, for example, the planets are neatly arranged, with the rocky, denser planets closer to the central star and the fluffy, low-density gas planets farther out.

“This contrast between the rhythmic harmony of the orbital motion and the disorderly densities certainly challenges our understanding of the formation and evolution of planetary systems,” says Leleu.
Combining techniques

To investigate the system’s unusual architecture, the team used data from the European Space Agency’s CHEOPS satellite, alongside the ground-based ESPRESSO instrument on ESO’s VLT and the NGTS and SPECULOOS, both sited at ESO’s Paranal Observatory in Chile. Since exoplanets are extremely tricky to spot directly with telescopes, astronomers must instead rely on other techniques to detect them. The main methods used are imaging transits — observing the light emitted by the central star, which dims as an exoplanet passes in front of it when observed from the Earth — and radial velocities — observing the star’s light spectrum for small signs of wobbles which happen as the exoplanets move in their orbits. The team used both methods to observe the system: CHEOPS, NGTS and SPECULOOS for transits and ESPRESSO for radial velocities.

By combining the two techniques, astronomers were able to gather key information about the system and its planets, which orbit their central star much closer and much faster than the Earth orbits the Sun. The fastest (the innermost planet) completes an orbit in just a couple of days, while the slowest takes about ten times longer. The six planets have sizes ranging from about one to about three times the size of Earth, while their masses are 1.5 to 30 times the mass of Earth. Some of the planets are rocky, but larger than Earth — these planets are known as Super-Earths. Others are gas planets, like the outer planets in our Solar System, but they are much smaller — these are nicknamed Mini-Neptunes.

Although none of the six exoplanets found lies in the star's habitable zone, the researchers suggest that, by continuing the resonance chain, they might find additional planets that could exist in or very close to this zone. ESO’s Extremely Large Telescope (ELT), which is set to begin operating this decade, will be able to directly image rocky exoplanets in a star’s habitable zone and even characterise their atmospheres, presenting an opportunity to get to know systems like TOI-178 in even greater detail.