It took fifteen years of imaging and nearly three years of stitching the pieces together to create the largest image ever made, the 8-trillion-pixel mosaic of Mars’ surface. Now, the first study to utilize the image in its entirety provides unprecedented insight into the ancient river systems that once covered the expansive plains in the planet’s southern hemisphere. These three billion-year-old sedimentary rocks, like those in Earth’s geologic record, could prove valuable targets for future exploration of past climates and tectonics on Mars.
(A) A suite of ridges on Mars (at –67.64°E, 43.37°S). To determine whether features are ridges or valleys, the researchers rely on lighting in the impact craters (depressions). Based on the craters, the light is coming from the top of the image. Because the fluvial ridges are casting shadows to the south, they can infer that the feature is sticking up from the surface—a ridge rather than a valley. 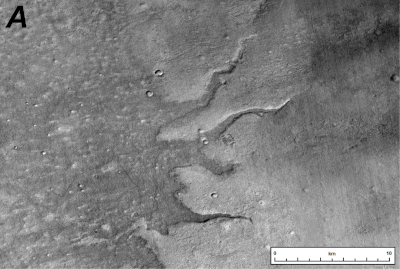 The work, published this month in Geology, complements existing research into Mars’ hydrologic history by mapping ancient fluvial (river) ridges, which are essentially the inverse of a riverbed. “If you have a river channel, that’s the erosion part of a river. So, by definition, there aren't any deposits there for you to study,” Jay Dickson, lead author on the paper, explains. “You have rivers eroding rocks, so where did those rocks go? These ridges are the other half of the puzzle.” Using the mosaic, as opposed to more localized imagery, let the researchers solve that puzzle on a global scale.

Mars used to be a wet world, as evidenced by rock records of lakes, rivers, and glaciers. The river ridges were formed between 4 and 3 billion years ago, when large, flat-lying rivers deposited sediments in their channels (rather than only having the water cut away at the surface). Similar systems today can be found in places like southern Utah and Death Valley in the U.S., and the Atacama Desert in Chile. Over time, sediment built up in the channels; once the water dried up, those ridges were all that was left of some rivers.
(B) A similar “analogue” environment on Earth. Fluvial ridges similar to the ones on Mars are in California's Amargosa river system, although with water still running through the system, it’s the active precursor to the ridges that are remnant on Mars. 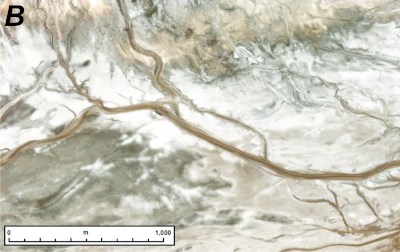 Image courtesy J. Dickson.
The ridges are present only in the southern hemisphere, where some of Mars’ oldest and most rugged terrain is, but this pattern is likely a preservation artifact. “These ridges probably used to be all over the entire planet, but subsequent processes have buried them or eroded them away,” Dickson says. “The northern hemisphere is very smooth because it’s been resurfaced, primarily by lava flows.” Additionally, the southern highlands are “some of the flattest surfaces in the solar system,” says Woodward Fischer, who was involved in this work. That exceptional flatness made for good sedimentary deposition, allowing the creation of the records being studied today.

Whether or not a region has fluvial ridges is a basic observation that wasn’t possible until this high-resolution image of the planet’s surface was assembled. Each of the 8 trillion pixels represents 5 to 6 square meters, and coverage is nearly 100 percent, thanks to the “spectacular engineering” of NASA’s context camera that has allowed it to operate continuously for well over a decade. An earlier attempt to map these ridges was published in 2007 by Rebecca Williams, a co-author on the new study, but that work was limited by imagery coverage and quality.

“The first inventory of fluvial ridges using meter-scale images was conducted on data acquired between 1997 and 2006,” Williams says. “These image strips sampled the planet and provided tantalizing snapshots of the surface, but there was lingering uncertainty about missing fluvial ridges in the data gaps.”

The resolution and coverage of Mars’ surface in the mosaic has eliminated much of the team’s uncertainty, filling in gaps and providing context for the features. The mosaic allows researchers to explore questions at global scales, rather than being limited to patchier, localized studies and extrapolating results to the whole hemisphere. Much previous research on Mars hydrology has been limited to craters or single systems, where both the sediment source and destination are known. That’s useful, but more context is better in order to really understand a planet’s environmental history and to be more certain in how an individual feature formed.

In addition to identifying 18 new fluvial ridges, using the mosaic image allowed the team to re-examine features that had previously been identified as fluvial ridges. Upon closer inspection, some weren’t formed by rivers after all, but rather lava flows or glaciers. “If you only see a small part of [a ridge], you might have an idea of how it formed,” Dickson says. “But then you see it in a larger context—like, oh, it’s the flank of a volcano, it’s a lava flow. So now we can more confidently determine which are fluvial ridges, versus ridges formed by other processes.”

Now that we have a global understanding of the distribution of ancient rivers on Mars, future explorations—whether by rover or by astronauts—could use these rock records to investigate what past climates and tectonics were like. “One of the biggest breakthroughs in the last twenty years is the recognition that Mars has a sedimentary record, which means we’re not limited to studying the planet today,” Fischer says. “We can ask questions about its history.” And in doing so, he says, we learn not only about a single planet’s past, but also find “truths about how planets evolved… and why the Earth is habitable.”

As this study is only the first to use the full mosaic, Dickson looks forward to seeing how it gets put to use next. “We expect to see more and more studies, similar in scale to what we're doing here, by other researchers around the world,” he says. “We hope that this ‘maiden voyage’ scientific study sets an example for the scale of science that can be done with a product this big.”