By monitoring the cosmos with a radio telescope array, an international team of scientists has detected radio bursts emanating from the constellation Boötes – that could be the first radio emission collected from a planet beyond our solar system.

In this artistic rendering of the Tau Boötes b system, the lines representing the invisible magnetic field are shown protecting the hot Jupiter planet from solar wind. 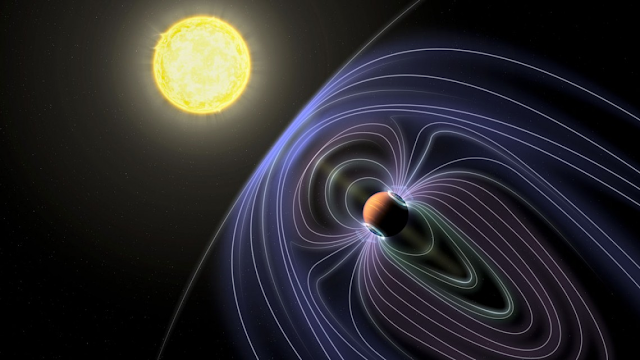 The team, led by Cornell postdoctoral researcher Jake D. Turner, Philippe Zarka of the Observatoire de Paris - Paris Sciences et Lettres University and Jean-Mathias Griessmeier of the Université d’Orléans will publish their findings in the forthcoming research section of Astronomy & Astrophysics, on Dec. 16.

“We present one of the first hints of detecting an exoplanet in the radio realm,” Turner said. “The signal is from the Tau Boötes system, which contains a binary star and an exoplanet. We make the case for an emission by the planet itself. From the strength and polarization of the radio signal and the planet’s magnetic field, it is compatible with theoretical predictions.”

Among the co-authors is Turner’s postdoctoral advisor Ray Jayawardhana, the Harold Tanner Dean of the College of Arts and Sciences, and a professor of astronomy.

“If confirmed through follow-up observations,” Jayawardhana said, “this radio detection opens up a new window on exoplanets, giving us a novel way to examine alien worlds that are tens of light-years away.”

Using the Low Frequency Array (LOFAR), a radio telescope in the Netherlands, Turner and his colleagues uncovered emission bursts from a star-system hosting a so-called hot Jupiter, a gaseous giant planet that is very close to its own sun. The group also observed other potential exoplanetary radio-emission candidates in the 55 Cancri (in the constellation Cancer) and Upsilon Andromedae systems. Only the Tau Boötes exoplanet system – about 51 light-years away – exhibited a significant radio signature, a unique potential window on the planet’s magnetic field.

Two years ago, Turner and his colleagues examined the radio emission signature of Jupiter and scaled those emissions to mimic the possible signatures from a distant Jupiter-like exoplanet. Those results became the template for searching radio emission from exoplanets 40 to 100 light-years away.

After poring over nearly 100-hours of radio observations, the researchers were able to find the expected hot Jupiter signature in Tau Boötes. “We learned from our own Jupiter what this kind of detection looks like. We went searching for it and we found it,” Turner said.

The signature, though, is weak. “There remains some uncertainty that the detected radio signal is from the planet. The need for follow-up observations is critical,” he said.

Turner and his team have already begun a campaign using multiple radio telescopes to follow up on the signal from Tau Boötes.

Turner, who laid the groundwork for this research while earning his doctorate at the University of Virginia, received funding from the National Science Foundation.

By monitoring the cosmos with a radio telescope array, an international team of scientists has detected radio bursts emanating from the constellation Boötes – that could be the first radio emission collected from a planet beyond our solar system. Cornell postdoctoral researcher Jake D. Turner explains the research.