The perfect transmission of sound through a barrier is difficult to achieve, if not impossible based on our existing knowledge. This is also true with other energy forms such as light and heat.  A new study experimentally proved for the first time a century-old quantum theory that relativistic particles can pass through a barrier with 100% transmission

A research team led by Professor Xiang Zhang, President of the University of Hong Kong (HKU) when he was a professor at the University of California, Berkeley, (UC Berkeley) has for the first time experimentally proved a century old quantum theory that relativistic particles can pass through a barrier with 100% transmission. The research findings have been published in the top academic journal Science.
The phononic crystals are made by artificially placing the acrylic posts in the special pattern. 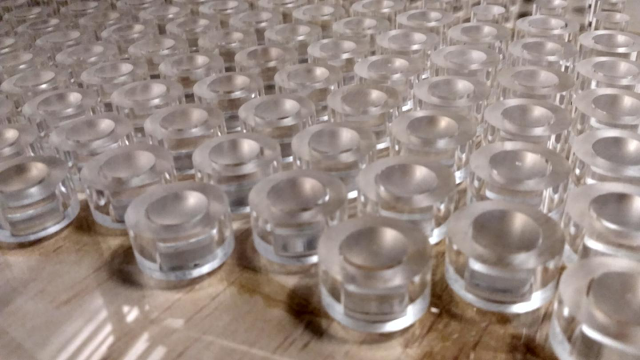 Credit: University of Hong Kong (HKU)
Just as it would be difficult for us to jump over a thick high wall without enough energy accumulated. In contrast, it is predicted that a microscopic particle in the quantum world can pass through a barrier well beyond its energy regardless of the height or width of the barrier, as if it is "transparent".

As early as 1929, theoretical physicist Oscar Klein proposed that a relativistic particle can penetrate a potential barrier with 100% transmission upon normal incidence on the barrier. Scientists called this exotic and counterintuitive phenomenon the "Klein tunneling" theory. In the following 100 odd years, scientists tried various approaches to experimentally test Klein tunneling, but the attempts were unsuccessful and direct experimental evidence is still lacking.

"This is an exciting discovery. Quantum physicists have always tried to observe Klein tunneling in elementary particle experiments, but it is a very difficult task. We designed a phononic crystal similar to graphene that can excite the relativistic quasiparticles, but unlike natural material of graphene, the geometry of the man-made phononic crystal can be adjusted freely to precisely achieve the ideal conditions that made it possible to the first direct observation of Klein tunneling," said Professor Zhang.

The achievement not only represents a breakthrough in fundamental physics, but also presents a new platform for exploring emerging macroscale systems to be used in applications such as on-chip logic devices for sound manipulation, acoustic signal processing, and sound energy harvesting.
Experimental setup: the artificial phononic crystals are designed and fabricated by the research team. Sound emitted from the loudspeakers array normally propagates from the right and excites the relativistic quasiparticle inside the phononic crystals. A mini microphone is attached to a 3D motion motor to scan the pressure field. 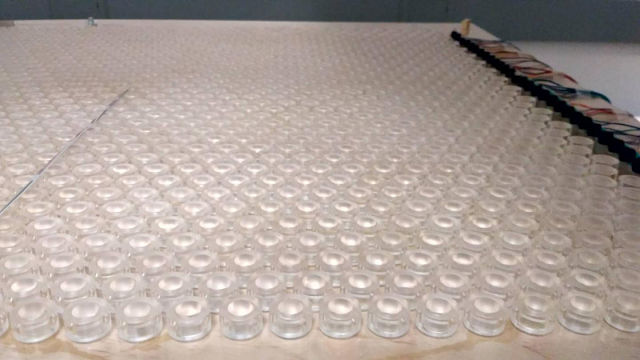 "In current acoustic communications, the transmission loss of acoustic energy on the interface is unavoidable. If the transmittance on the interface can be increased to nearly 100%, the efficiency of acoustic communications can be greatly improved, thus opening up cutting-edge applications. This is especially important when the surface or the interface play a role in hindering the accuracy acoustic detection such as underwater exploration. The experimental measurement is also conducive to the future development of studying quasiparticles with topological property in phononic crystals which might be difficult to perform in other systems," said Dr. Xue Jiang, a former member of Zhang's team and currently an Associate Researcher at the Department of Electronic Engineering at Fudan University.

Dr. Jiang pointed out that the research findings might also benefit the biomedical devices. It may help to improve the accuracy of ultrasound penetration through obstacles and reach designated targets such as tissues or organs, which could improve the ultrasound precision for better diagnosis and treatment.

On the basis of the current experiments, researchers can control the mass and dispersion of the quasiparticle by exciting the phononic crystals with different frequencies, thus achieving flexible experimental configuration and on/off control of Klein tunneling. This approach can be extended to other artificial structure for the study of optics and thermotics. It allows the unprecedent control of quasiparticle or wavefront, and contributes to the exploration on other complex quantum physical phenomena.