Invention May Get Army Quadcopters To Move Faster

Researchers believe a new hinge is the key to get load-bearing, large, Army quadrotors to climb a few dozen feet in seconds.

Dr. Jean-Paul Reddinger, a research aerospace engineer with the U.S. Army Combat Capabilities Development Command, now known as DEVCOM, Army Research Laboratory, is studying how quickly a quadrotor the size of a king-sized mattress can ascend from the ground to the rooftop of a two-story building, particularly with large payloads such as the weight of a Soldier.
Army Researcher Dr. Jean-Paul Reddinger invents a new hinge that enables load-bearing, large, Army quadrotors to climb a few dozen feet in seconds. 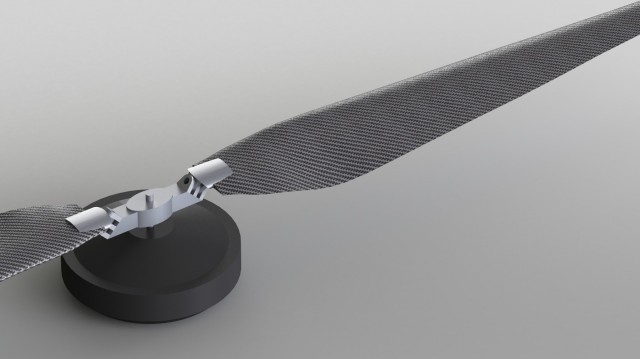 Reddinger invented a hinge at the root of the quadrotor blade next to the hub. He situated it so that the blade pitch changes with rotor speed.

As quadrotors and similar aircraft are scaled up, the extra inertia of the rotor blade slows them down, he said.

It can take a long time for lightweight electric motors to change the rotor speed and thrust, which ultimately impacts the vehicle's speed, range and flight stability, but with this coupling the thrust becomes more sensitive to changes in rotation per minute, or RPM.

Reddinger said the difference is large quadrotors carrying these loads that could climb roughly 25 feet in as little as two seconds with the hinge instead of three or four seconds without it.

Reddinger said if they can increase the thrust sensitivity to changes in the RPM, it will allow for greater control authority and more agility.

Helicopters with four rotors, commonly referred to as quadrotors or quadcopters, are part of a family of unmanned aircraft systems that have two pairs of counter-rotating rotors and propellers. These vehicles can hover, fly forward and perform vertical take-off and landings, similar to helicopters.

This invention will likely improve agility without fully committing to a swashplate and the weight penalties associated with it, he said.

According to Reddinger, people usually design around the issues of responsiveness in one of two ways. They add a swashplate to actively control the blade pitch, or just put smaller rotors on the aircraft like an octacopter, he said.

"The problem is that both of these solutions weigh more, which means the air craft can't carry as much gear, or cameras, or batteries," he said.


DEVCOM Army Research Laboratory is an element of the U.S. Army Combat Capabilities Development Command. As the Army's corporate research laboratory, ARL is operationalizing science to achieve transformational overmatch. Through collaboration across the command's core technical competencies, DEVCOM leads in the discovery, development and delivery of the technology-based capabilities required to make Soldiers more successful at winning the nation's wars and come home safely. DEVCOM is a major subordinate command of the Army Futures Command.