Evidence for a Massive Paleo-Tsunami at Ancient Tel Dor, Israel

Underwater excavation, borehole drilling, and modelling suggests a massive paleo-tsunami struck near the ancient settlement of Tel Dor between 9,910 to 9,290 years ago, according to a study published December 23, 2020 in the open-access journal PLOS ONE by Gilad Shtienberg, Richard Norris and Thomas Levy from the Scripps Center for Marine Archaeology, University of California, San Diego, USA, and colleagues from Utah State University and the University of Haifa.
<iframe width="700" height="406" src="https://www.youtube.com/embed/z6DssjtQJaE" frameborder="0" allow="accelerometer; autoplay; clipboard-write; encrypted-media; gyroscope; picture-in-picture" allowfullscreen></iframe>
Video credit: The Qualcomm Institute, CC-BY"

Tsunamis are a relatively common event along the eastern Mediterranean coastline, with historical records and geographic data showing one tsunami occurring per century for the last six thousand years. The record for earlier tsunami events, however, is less defined. In this study, Shtienberg and colleagues describe a large early Holocene tsunami deposit (between 9,910 to 9,290 years ago) in coastal sediments at Tel Dor in northwest Israel, a maritime city-mound occupied from the Middle Bronze II period (2000-1550 BCE) through the Crusader period.

To conduct their analysis, the authors used photogrammetric remote sensing techniques to create a digital model of the Tel Dor site, combined with underwater excavation and terrestrial borehole drilling to a depth of nine meters.
Geoprobe drilling rig extraction of a sediment core with evidence of a tsunami from South Bay, Tel Dor, Israel 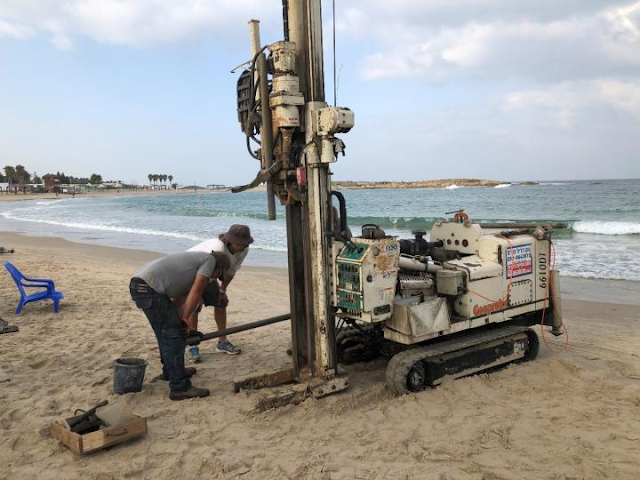 Credit: Photo by T. E. Levy
Along the coast of the study area, the authors found an abrupt marine shell and sand layer with an age of constraint 9,910 to 9,290 years ago, in the middle of a large ancient wetland layer spanning from 15,000 to 7,800 years ago. The authors estimate the wave capable of depositing seashells and sand in the middle of what was at the time fresh to brackish wetland must have travelled 1.5 to 3.5 km, with a coastal wave height of 16 to 40 m. For comparison, previously documented tsunami events in the eastern Mediterranean have travelled inland only around 300 m--suggesting the tsunami at Dor was generated by a far stronger mechanism. Local tsunamis tend to arise due to earthquakes in the Dead Sea Fault system and submarine landslides; the authors note that an earthquake contemporary to the Dor paleo-tsunami (dating to around 10,000 years ago) has already been identified using cave damage in the nearby Carmel ridge, suggesting this specific earthquake could have triggered an underwater landslide causing the massive tsunami at Dor.

This paleo-tsunami would have occurred during the Early to Middle Pre-Pottery Neolithic B cultural period of the region (10,700-9,250 years ago 11,700-10,500 cal BP), and potentially wiped out evidence of previous Natufian (12,500-12,000 years ago) and Pre-Pottery Neolithic coastal villages (previous surveys and excavations show a near absence of low-lying coastal villages in this region). The re-appearance of abundant Late Neolithic archaeological sites (ca. 6,000 BCE) along the coast in the years after the Dor tsunami coincides with the resumption of wetland deposition in the Dor core samples and indicates resettlement followed the event--highlighting residents' resilience in the face of massive disruption.

According to Gilad Shtienberg, a postdoc at the Scripps Center for Marine Archaeology at UC San Diego who is studying the sediment cores, "Our project focuses on reconstructing ancient climate and environmental change over the past 12,000 years along the Israeli coast; and we never dreamed of finding evidence of a prehistoric tsunami in Israel. Scholars know that at the beginning of the Neolithic, around 10,000 years ago, the seashore was 4 kilometers from where it is today. When we cut the cores open in San Diego and started seeing a marine shell layer embedded in the dry Neolithic landscape, we knew we hit the jackpot."