While water blasting at a wall of frozen mud in Yukon, Canada, a gold miner made an extraordinary discovery: a perfectly preserved wolf pup that had been locked in permafrost for 57,000 years. The remarkable condition of the pup, named Zhùr by the local Tr'ondëk Hwëch'in people, gave researchers a wealth of insights about her age, lifestyle, and relationship to modern wolves. The findings appear December 21 in the journal Current Biology.
This photo shows an x-ray view of the wolf pup. Credit: Government of Yukon
"She's the most complete wolf mummy that's ever been found. She's basically 100% intact--all that's missing are her eyes," says first author Julie Meachen, an associate professor of anatomy at Des Moines University. "And the fact that she's so complete allowed us to do so many lines of inquiry on her to basically reconstruct her life."

One of the most important questions about Zhùr that the researchers sought to answer was how she ended up preserved in permafrost to begin with. It takes a unique combination of circumstances to produce a permafrost mummy.

"It's rare to find these mummies in the Yukon. The animal has to die in a permafrost location, where the ground is frozen all the time, and they have to get buried very quickly, like any other fossilization process," says Meachen. "If it lays out on the frozen tundra too long it'll decompose or get eaten."

Another important factor is how the wolf died. Animals that die slowly or are hunted by predators are less likely to be found in pristine condition. "We think she was in her den and died instantaneously by den collapse," says Meachen. "Our data showed that she didn't starve and was about 7 weeks old when she died, so we feel a bit better knowing the poor little girl didn't suffer for too long."
This photo shows a closeup of the wolf pup's head, showing her teeth. 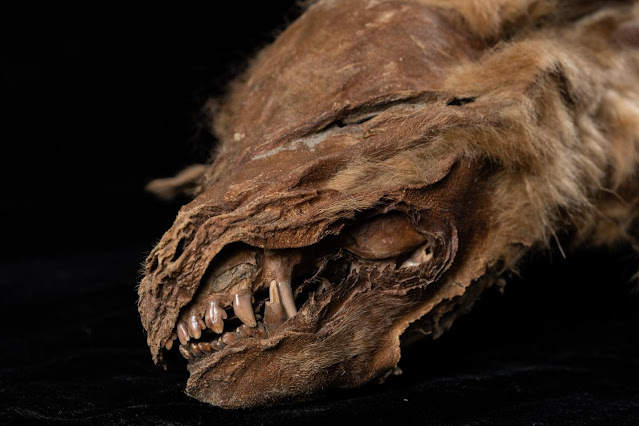 In addition to learning how Zhùr died, the team were also able to analyze her diet. As it turns out, her diet was heavily influenced by how close she lived to water. "Normally when you think of wolves in the Ice Age, you think of them eating bison or musk oxen or other large animals on land. One thing that surprised us was that she was eating aquatic resources, particularly salmon."

Analyzing Zhùr's genome also confirmed that she is descended from ancient wolves from Russia, Siberia, and Alaska, who are the ancestors of modern wolves as well. Although analyzing Zhùr gave the researchers many answers about wolves of the past, there remain some outstanding questions about Zhùr and her family.

"We've been asked why she was the only wolf found in the den, and what happened to her mom or siblings," says Meachen. "It could be that she was an only pup. Or the other wolves weren't in the den during the collapse. Unfortunately, we'll never know."

The specimen holds special significance for the local Tr'ondëk Hwëch'in people, who have agreed to place Zhùr on display at the Yukon Beringia Interpretive Centre in Whitehorse. She is cleaned and conserved so she will stay intact for years to come, allowing her to travel to other Yukon locations as well. And the research team predicts there may be more and more permafrost mummies found in the coming years.
This photo shows the wolf pup as she was found. 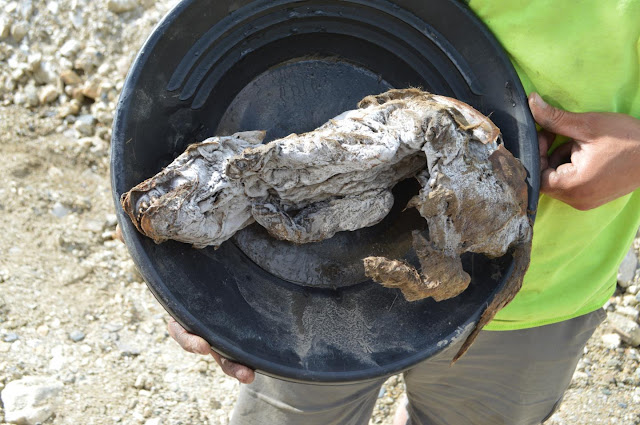 Credit: Government of Yukon
"One small upside of climate change is that we're going to find more of these mummies as permafrost melts," says Meachen. "That's a good way for science to reconstruct that time better, but it also shows us how much our planet is actually warming. We really need to be careful."


This work was supported by the MJ Murdock Charitable Trust awarded to Dr. Matthew Wooller at UAF.