For hundreds of thousands of years, early humans in the East African Rift Valley could expect certain things of their environment. Freshwater lakes in the region ensured a reliable source of water, and large grazing herbivores roamed the grasslands. Then, around 400,000 years ago, things changed. The environment became less predictable, and human ancestors faced new sources of instability and uncertainty that challenged their previous long-standing way of life.

The first analysis of a new sedimentary drill core representing 1 million years of environmental history in the East African Rift Valley shows that at the same time early humans were abandoning old tools in favor of more sophisticated technology and broadening their trade networks, their landscape was experiencing frequent fluctuations in vegetation and water supply that made resources less reliably available. The findings suggest that instability in their surrounding climate, land and ecosystem was a key driver in the development of new traits and behaviors underpinning human adaptability.'
In seeking to understand the major evolutionary transition they had uncovered at Olorgesailie in 2018, Potts and his team had been frustrated by a large 180,000-year gap in the region’s environmental record. To learn about how the region changed during that period, they had to look elsewhere. 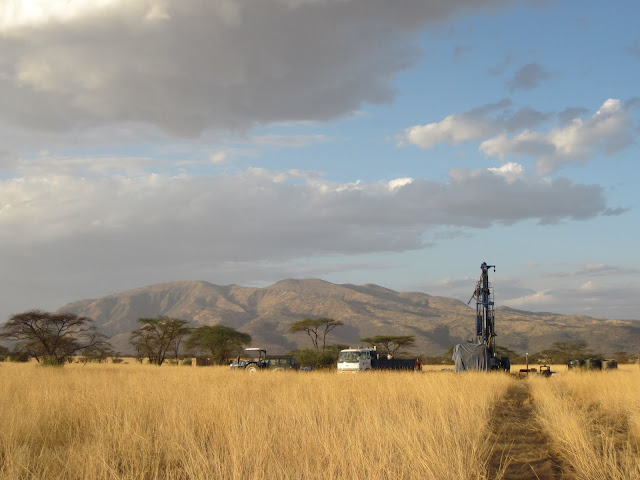 Credit: Human Origins Program, Smithsonian
In the Oct. 21 issue of the journal Science Advances, an interdisciplinary team of scientists led by Richard Potts, director of the Human Origins Program at the Smithsonian’s National Museum of Natural History, describes the prolonged period of instability across the landscape in this part of Africa (now Kenya) that occurred at the same time humans in the region were undergoing a major behavioral and cultural shift in their evolution.

Potts and colleagues documented this behavioral and cultural shift in 2018 based on artifacts recovered at an archaeological site known as Olorgesailie. Decades of study at Olorgesailie by Potts’ team and collaborators at the National Museums of Kenya have determined that early humans at Olorgesailie relied on the same tools, stone handaxes, for 700,000 years. Their way of life during this period was remarkably stable, with no major changes in their behaviors and strategies for survival. Then, beginning around 320,000 years ago, people living there entered the Middle Stone Age, crafting smaller, more sophisticated weapons, including projectiles. At the same time, they began to trade resources with distant groups and to use coloring materials, suggesting symbolic communication. All these changes were a significant departure from their previous lifestyle, likely helping early humans cope with their newly variable landscape, Potts said.

“The history of human evolution has been one of increasing adaptability,” Potts said. “We come from a family tree that’s diverse, but all of those other ways of being human are now extinct. There’s only one of us left, and we may well be the most adaptable species that may have ever existed on the face of the Earth.”

While some scientists have proposed that climate fluctuations alone may have driven humans to evolve this remarkable quality of adaptability, the new study indicates the picture is more complicated than that. Instead, the team’s analysis shows that climate variability is but one of several intertwined environmental factors that drove the cultural shift they described in 2018. The new analysis reveals how a changing climate along with new land faults introduced by tectonic activity and ecological disruptions in the vegetation and fauna all came together to drive disruptions that made technological innovation, trading resources and symbolic communication­—three key factors in adaptability—beneficial for early humans in this region.
The team’s analysis suggests that as parts of the grassy plains in the region were fragmented along fault lines due to tectonic activity, small basins formed. 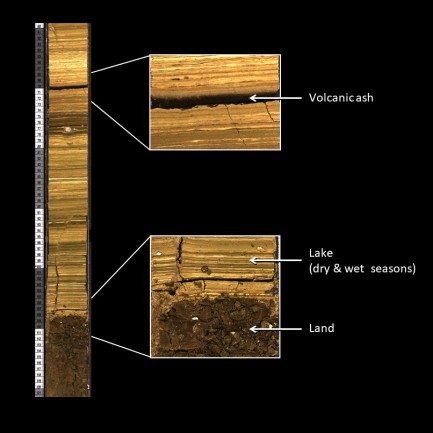 Credit: Human Origins Program, Smithsonian; core image courtesy of LacCore, University of Minnesota.
In seeking to understand the major evolutionary transition they had uncovered at Olorgesailie, Potts and his team had been frustrated by a large gap in the region’s environmental record. Erosion at Olorgesailie, a hilly area full of sedimentary outcrops, had removed the geologic layers representing some 180,000 years of time at exactly the period of this evolutionary transition. To learn about how the region changed during that period, they had to look elsewhere.

They arranged to have a Nairobi company drill in the nearby Koora basin, extracting sediment from as deep into the earth as they could. The drill site, about 15 miles from the archaeological dig sites, was a flat, grassy plain, and the team had no clear idea what was beneath its surface. With the involvement and support from the National Museums of Kenya and the local Oldonyo Nyokie community, a 139-meter core was removed from the earth. That cylinder of earth, just four centimeters in diameter, turned out to represent 1 million years of environmental history.

Colleagues in the National Museum of Natural History’s Human Origins Program and Department of Paleobiology and dozens of collaborators at institutions worldwide worked to analyze the environmental record they had obtained, which is now the most precisely dated African environmental record of the past 1 million years. Charting radioisotope ages and changes in chemical composition and deposits left by plants and microscopic organisms through the different layers of the core, the team reconstructed key features of the ancient landscape and climate across time.

They found that after a long period of stability, the environment in this part of Africa became more variable around 400,000 years ago, when tectonic activity fragmented the landscape. By integrating information from the drill core with knowledge gleaned from fossils and archeological artifacts, they determined that the entire ecosystem evolved in response.

The team’s analysis suggests that as parts of the grassy plains in the region were fragmented along fault lines due to tectonic activity, small basins formed. These areas were more sensitive to changes in rainfall than the larger lake basins that had been there before. Elevated terrain also allowed water runoff from high ground to contribute to the formation and drying out of lakes. These changes occurred during a period when precipitation had become more variable, leading to frequent and dramatic fluctuations in water supply.

With the fluctuations, a broader set of ecological changes also took place. The team found that vegetation in the region also changed repeatedly, shifting between grassy plains and wooded areas. Meanwhile, large grazing herbivores, which no longer had large tracts of grass to feed on, began to die out and were replaced by smaller mammals with more diverse diets.

“There was a massive change in the animal fauna during the time period when we see early human behavior changing,” Potts said. “The animals also influenced the landscape through the kinds of plants that they ate. Then with humans in the mix, and some of their innovations like projectile weapons, they also may have affected the fauna. It’s a whole ecosystem changing, with humans as part of it.”

Finally, Potts notes that while adaptability is a hallmark of human evolution, that does not mean the species is necessarily equipped to endure the unprecedented change Earth is now experiencing due to man-made climate change and Anthropogenic biodiversity loss. “We have an astonishing capacity to adapt, biologically in our genes as well as culturally and socially,” he said. “The question is, are we now creating through our own activities new sources of environmental disruption that will continue to challenge human adaptability?”

Funding for this research was provided by the William H. Donner Foundation and the Peter Buck Fund for the National Museum of Natural History’s Human Origins Program.