The discovery of a remarkably well-preserved fossil from the extinct human species Paranthropus robustus suggests rapid evolution during a turbulent period of local climate change, resulting in anatomical changes that previously were attributed to sex. 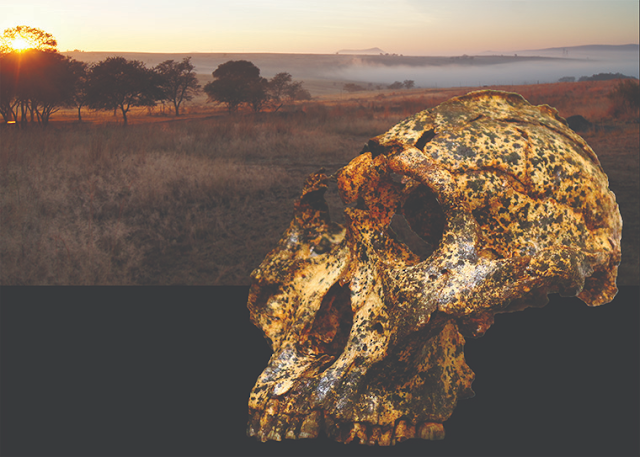 Males of the extinct human species Paranthropus robustus were thought to be substantially larger than females — much like the size differences seen in modern-day primates such as gorillas, orangutans and baboons. But a new fossil discovery in South Africa instead suggests that P. robustus evolved rapidly during a turbulent period of local climate change about 2 million years ago, resulting in anatomical changes that previously were attributed to sex.

An international research team including anthropologists at Washington University in St. Louis reported their discovery from the fossil-rich Drimolen cave system northwest of Johannesburg in the journal Nature Ecology & Evolution on Nov. 9.Strait 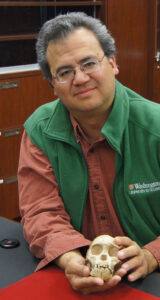 “This is the type of phenomenon that can be hard to document in the fossil record, especially with respect to early human evolution,” said David Strait, professor of biological anthropology in Arts & Sciences at Washington University.

The remarkably well-preserved fossil described in the paper was discovered by a student, Samantha Good, who participated in the Drimolen Cave Field School co-led by Strait.

Researchers already knew that the appearance of P. robustus in South Africa roughly coincided with the disappearance of Australopithecus, a somewhat more primitive early human, and the emergence in the region of early representatives of Homo, the genus to which modern people belong. This transition took place very rapidly, perhaps within only a few tens of thousands of years.

“The working hypothesis has been that climate change created stress in populations of Australopithecus leading eventually to their demise, but that environmental conditions were more favorable for Homo and Paranthropus, who may have dispersed into the region from elsewhere,” Strait said. “We now see that environmental conditions were probably stressful for Paranthropus as well, and that they needed to adapt to survive.”

The new specimen discovered at Drimolen, identified as DNH 155, is clearly a male but differs in important ways from other P. robustus previously discovered at the nearby site of Swartkrans — where most of the fossils of this species have been found.
The Drimolen site and nearby Swartkrans, in South Africa. 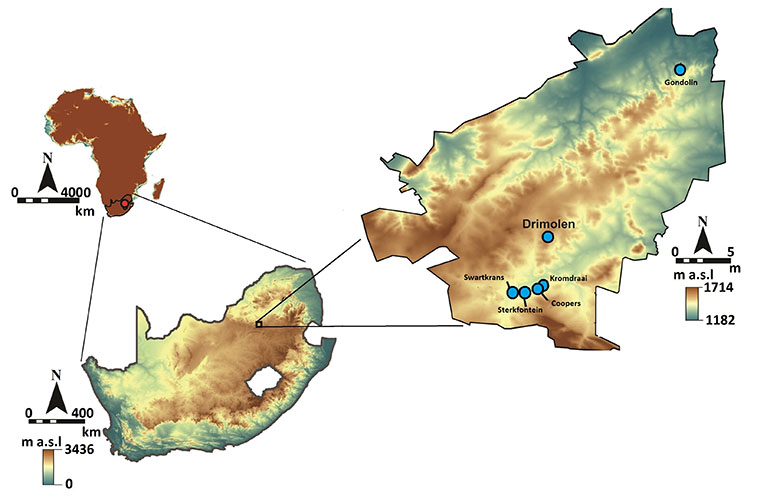 Usually, the fossil record reveals larger-scale patterns, such as when species or groups of species either appear in the fossil record or go extinct. So this Drimolen discovery provides a rarely seen window into early human evolution.

The new specimen is larger than a well-studied member of the species previously discovered at Drimolen — an individual known as DNH 7, and presumed to be female — but is measurably smaller than presumed males from Swartkrans.Martin 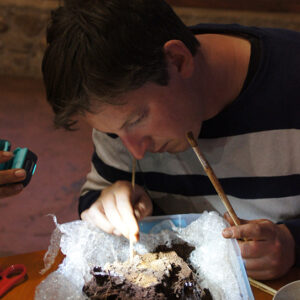 “It now looks as if the difference between the two sites cannot simply be explained as differences between males and females, but rather as population-level differences between the sites,” said Jesse Martin, a doctoral student at La Trobe University and the co-first author of the study. “Our recent work has shown that Drimolen predates Swartkrans by about 200,000 years, so we believe that P. robustus evolved over time, with Drimolen representing an early population and Swartkrans representing a later, more anatomically derived population.”

“One can use the fossil record to help reconstruct the evolutionary relationships between species, and that pattern can provide all sorts of insights into the processes that shaped the evolution of particular groups,” Martin said. “But in the case of P. robustus, we can see discrete samples of the species drawn from the same geographic region but slightly different times exhibiting subtle anatomical differences, and that is consistent with change within a species.”
Drimolen field school students sifting through sediments looking for fossils of small mammals 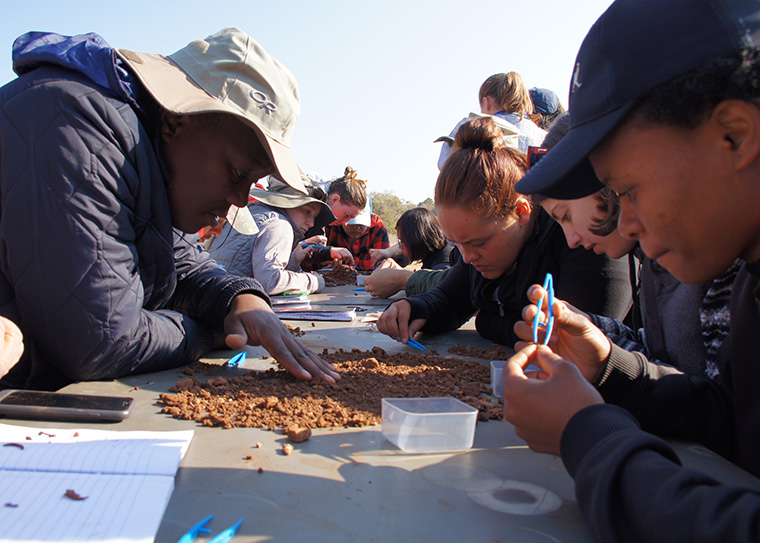 “It’s very important to be able to document evolutionary change within a lineage,” said Angeline Leece of La Trobe University, the other first author of the study. “It allows us to ask very focused questions about evolutionary processes. For example, we now know that tooth size changes over time in the species, which begs the question of why. There are reasons to believe that environmental changes placed these populations under dietary stress, and that points to future research that will let us test this possibility.”

Co-director of the Drimolen project, La Trobe University’s Andy Herries said, “Like all other creatures on earth, our ancestors adapted and evolved in accordance with the landscape and environment around them. For the first time in South Africa, we have the dating resolution and morphological evidence that allows us to see such changes in an ancient hominin lineage through a short window of time.”

The evidence of rapid but significant climate change during this period in South Africa comes from a variety of sources. Critically, fossils indicate that certain mammals associated with woodland or bushland environments went extinct or became less prevalent — while other species associated with drier, more open environments appeared locally for the first time.P. robustus

“P. robustus is remarkable in that it possesses a number of features in its cranium, jaws and teeth indicating that it was adapted to eat a diet consisting of either very hard or very tough foods,” Strait said. “We think that these adaptations allowed it to survive on foods that were mechanically difficult to eat as the environment changed to be cooler and drier, leading to changes in local vegetation.

“But the specimens from Drimolen exhibit skeletal features suggesting that their chewing muscles were positioned in such a way as to make them less able to bite and chew with as much force as the later P. robustus population from Swartkrans,” he said. “Over the course of 200,000 years, a dry climate likely led to natural selection favoring the evolution of a more efficient and powerful feeding apparatus in the species.”

Leece said it was notable that P. robustus appeared at roughly the same time as our direct ancestor Homo erectus, as documented by an infant H. erectus cranium that the team discovered at the same Drimolen site in 2015. 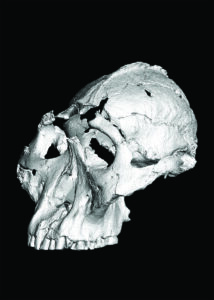 “These two vastly different species, H. erectus with their relatively large brains and small teeth, and P. robustus with their relatively large teeth and small brains, represent divergent evolutionary experiments,” Leece said. “While we were the lineage that won out in the end, the fossil record suggests that P. robustus was much more common than H. erectus on the landscape two million years ago.”
Sunrise at the Drimolen field site, South Africa.

More broadly, the researchers think that this discovery serves as a cautionary tale for recognizing species in the fossil record.

A large number of fossil human species have been discovered over the past quarter century, and many of these new species designations are based on a small number of fossils from only one or a few sites in small geographic areas and narrow time ranges.

Project Co-Director Stephanie Baker of the University of Johannesburg added, “Drimolen is fast becoming a hotspot for early hominin discoveries, which is a testament to the current team’s dedication to holistic excavation and post-field analysis. The DNH 155 cranium is one of the best-preserved P. robustus specimens known to science. This is an example of what careful, fine-scale research can tell us about our distant ancestors.”
Members of the research team at Drimolen field site, South Africa. 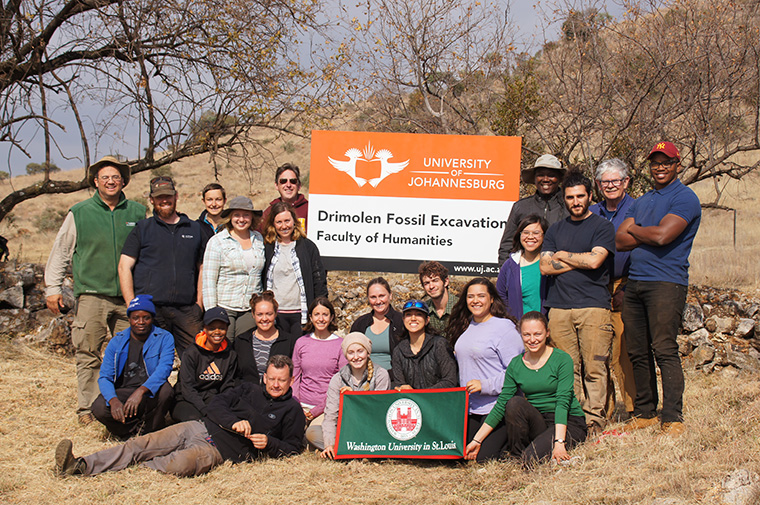