Giant Poisonous Rats So Lethal They Can Kill Elephants and Humans 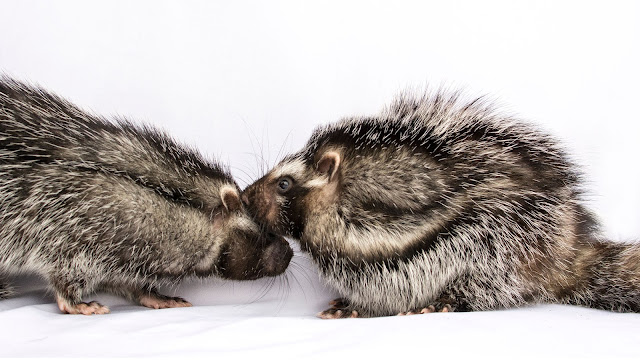 Credit: University of Utah
In a Journal of Mammology paper published today, Smithsonian Conservation Biology Institute, University of Utah and National Museums of Kenya researchers found the African crested rat is the only mammal known to sequester plant toxins for chemical defense and uncovered an unexpected social life—the rats appear to be monogamous and may even form small family units with their offspring.

“It’s considered a ‘black box’ of a rodent,” said Sara Weinstein, lead author and Smithsonian-Mpala postdoctoral fellow and postdoctoral researcher at the University of Utah. “We initially wanted to confirm the toxin sequestration behavior was real and along the way discovered something completely unknown about social behavior. Our findings have conservation implications for this mysterious and elusive rat.”
An African crested rat is a rabbit-sized rodent that is the only known mammal to sequester plant toxins as a chemical defense 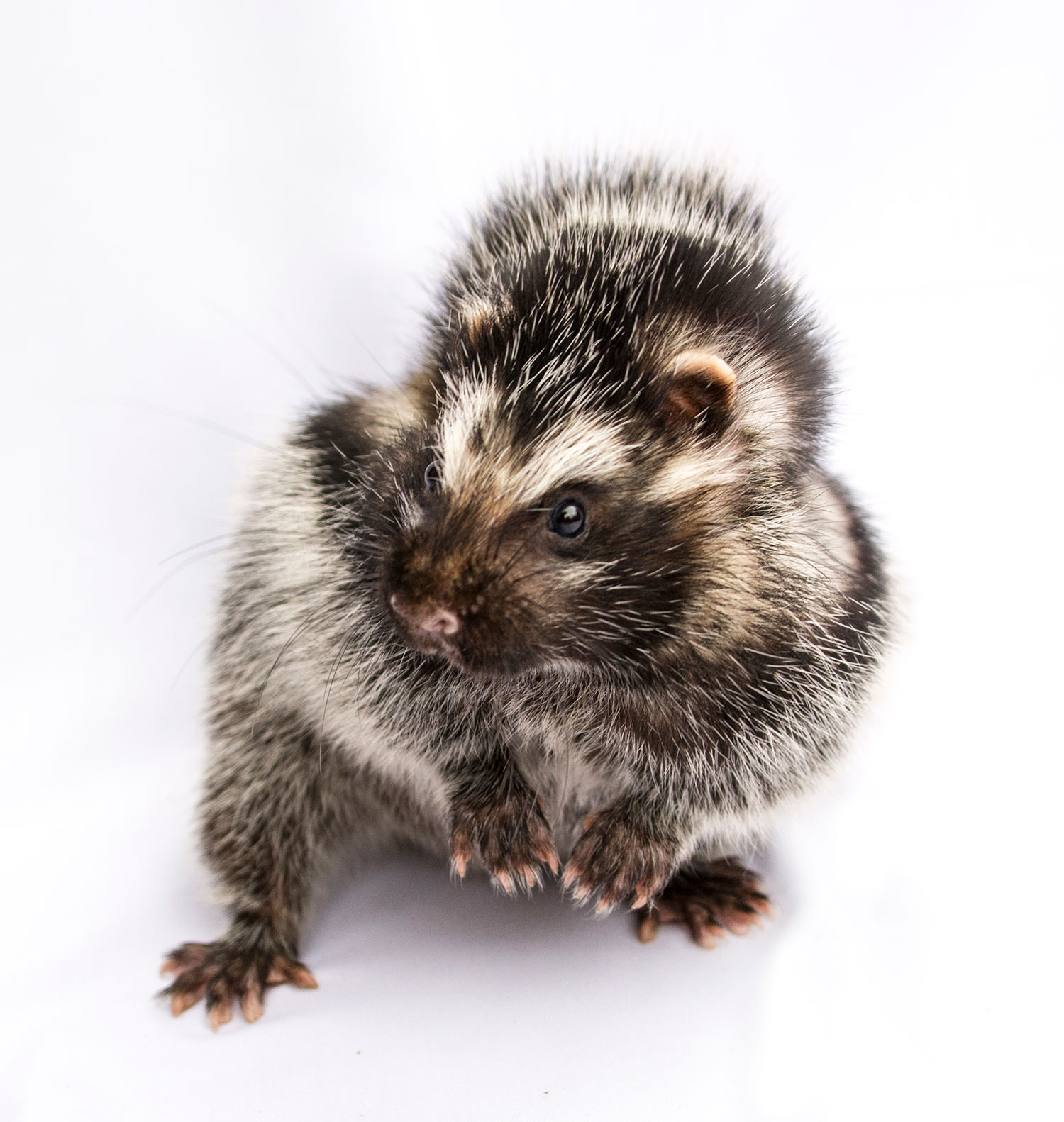 
People in East Africa have long suspected the rat to be poisonous. A 2011 paper proposed these large rodents sequester toxins from the poison arrow tree (Acokanthera schimperi). A source of traditional arrow poisons, Acokanthera contains cardenolides, compounds similar to those found in monarch butterflies, cane toads and some human heart medications. Cardenolides, particularly the ones in Acokanthera, are highly toxic to most animals.

“The initial 2011 study observed this behavior in only a single individual. A main goal of our study was to determine how common this exceptional behavior was,” said co-author Denise Dearing from the University of Utah.

When threatened, the African crested rat lives up to its name and erects a crest of hair on its back to reveal a warning on its flanks—black and white stripes running from neck-to-tail on each side of its body. The 2011 study hypothesized that the rats chew the Acokanthera bark and lick the plant toxins into specialized hairs at the center of these stripes.

In the new study, researchers trapped 25 African crested rats, the largest sample size of the species ever trapped. Using motion-activated cameras, they documented nearly 1,000 hours of rat behavior. For the first time, they recorded multiple rats sequestering Acokanthera toxins and discovered many traits that suggest they are social, and likely monogamous.

“Everyone thought it was a solitary animal. I’ve been researching this rat for more than ten years, so you would expect there to be fewer surprises,” said Bernard Agwanda, curator of Mammals at the Museums of Kenya, co-author of this study and the 2011 paper. “This can carry over into conservation policy.”

As a postdoctoral fellow at the Mpala Research Centre, Weinstein first searched for the rats with camera traps, but found that they rarely triggered the cameras. Weinstein was then joined by Katrina Nyawira, the paper’s second author and now a graduate student at Oxford Brookes University. Together, they spent months experimenting with live traps to capture the elusive rodents.

“We talked to rangers and ranchers to ask whether they’d seen anything.” said Nyawira. Eventually they figured out that loading the traps with smelly foods like fish, peanut butter and vanilla, did the trick. “Out of 30 traps, we finally got two animals. That was a win. This thing is really rare.”
Sara B. Weinstein (left), Katrina Nyawira (right) stand in front of Acokanthera schimperi, also known as the poison arrow tree. 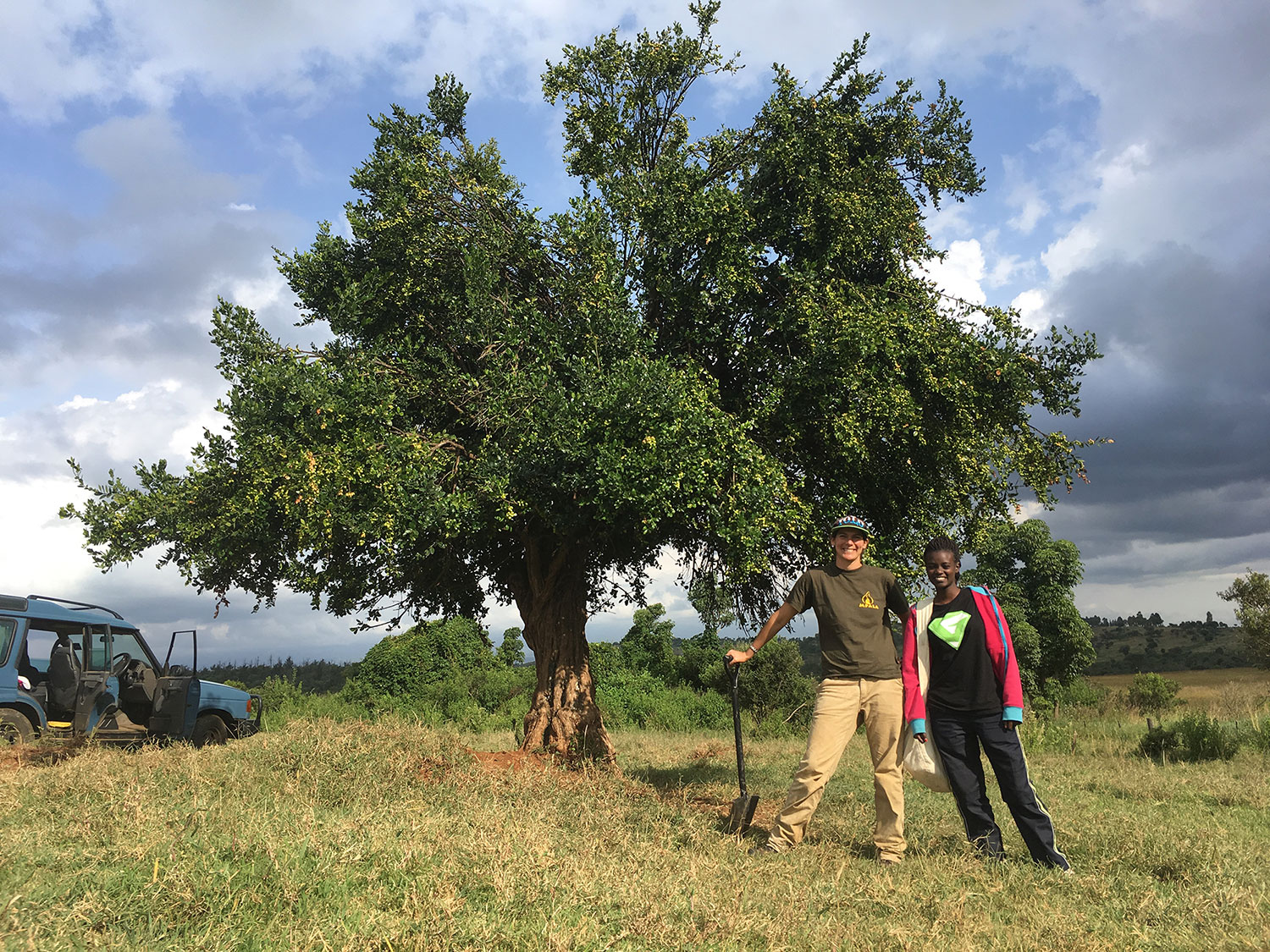 
Those two animals changed the course of the study. They first caught an individual female, then caught a male at the same site two days later.

“We put these two rats together in the enclosure and they started purring and grooming each other. Which was a big surprise, since everyone we talked to thought that they were solitary,” Weinstein said. “I realized that we had a chance to study their social interactions.”

Weinstein and Nyawira transformed an abandoned cow shed into a research station, constructing stalls equipped with ladders and nest boxes to simulate their habitat in tree cavities. They placed cameras in strategic spots of each pen and then analyzed every second of their footage, tracking the total activity, movement and feeding behavior. The aim was to build a baseline of normal behavior before testing whether behavior changed after the rats chewed the toxin cardenolides from the poison arrow tree.

“They’re herbivores, essentially rat-shaped little cows,” Weinstein said. “They spend a lot of time eating, but we also see them walk around, mate, groom, climb up the walls, sleep in the nest box.”

The footage and behavioral observations strongly support a monogamous lifestyle. They share many of the traits common among monogamous animals: large size, a long life span and a slow reproductive rate. Additionally, the researchers trapped a few large juveniles in the same location as adult pairs, suggesting that offspring spend an extended period of time with their parents. In the pens, the paired rats spent more than half of their time near each other, and frequently followed each other around. The researchers also recorded special squeaks, purrs and other communicative noises making up a wide vocal repertoire. Further behavioral studies and field observation would uncover more insights into their reproductive and family life.
A close up of a branch from Acokanthera schimperi. 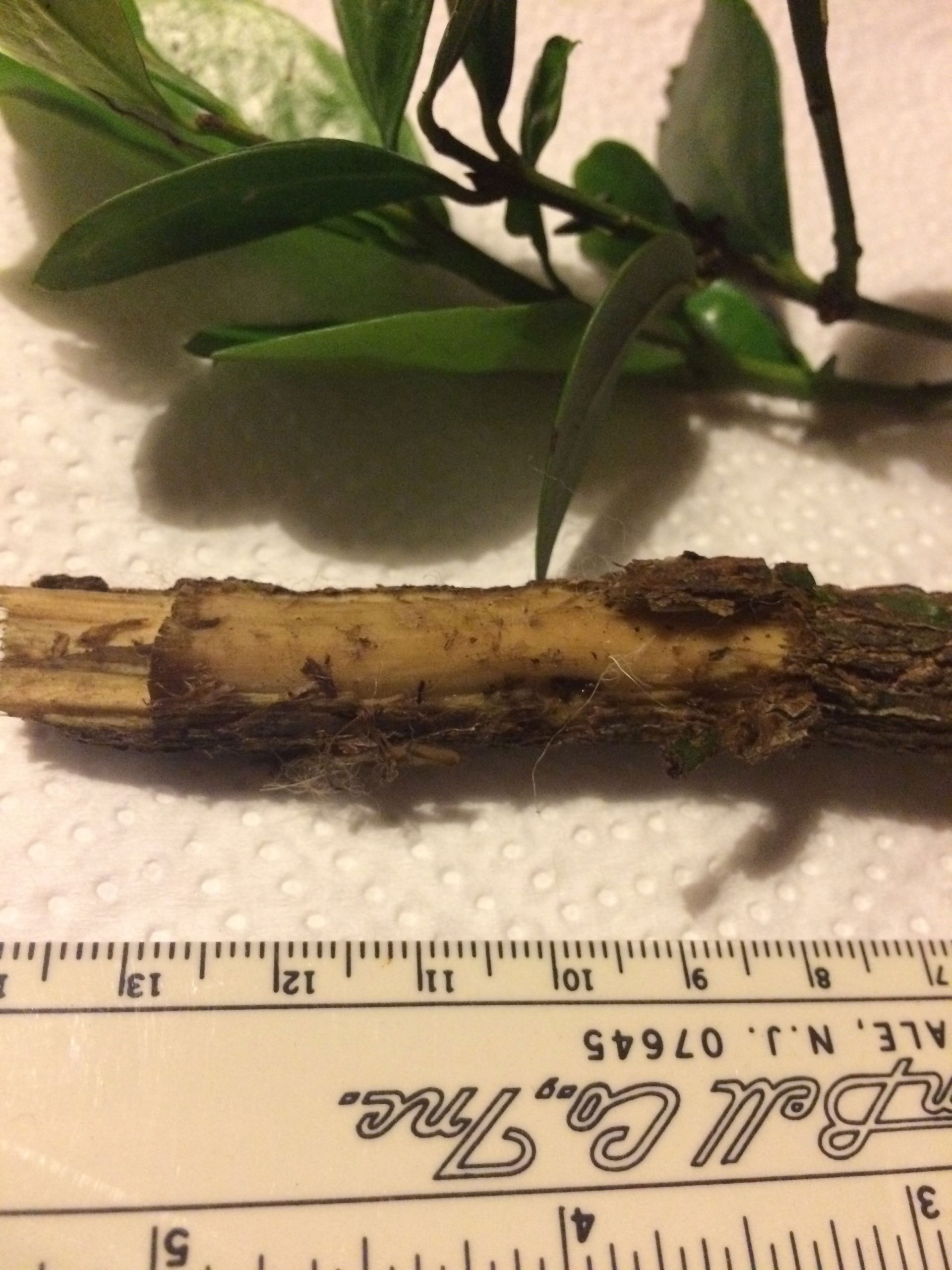 After the researchers established a baseline of behavior, they offered rats branches from the poison arrow tree. Although rats did not sequester every time the plant was offered, 10 rats did at least once. They chewed it, mixed it with spit, and licked and chewed it into their specialized hairs. Exposure to the Acokanthera toxins did not alter rat behavior, and neither did eating milkweed, the same cardenolide-enriched plant used as chemical defense by monarch butterflies. Combined, these observations suggest that crested rats are uniquely resistant to these toxins.

“Most people think that it was a myth because of the potency of the tree,” said Nyawira. “But we caught it on video! It was very crazy.”

The rats were selective about using Acokanthera cardenolides, suggesting that rats may be picky about their toxin source, or that anointed toxins remain potent on the fur a long time, just like traditional arrow poisons from the same source.

“We don’t have accurate numbers, but we have inferences. There was a time in Nairobi when cars would hit them and there was roadkill everywhere,” said Agwanda, who continues to monitor the populations. “Now encountering them is difficult. Our trapping rate is low. Their population is declining.”

The research team is planning future studies to better understand their physiology and behavior. “We are particularly interested in exploring the genetic mechanisms that allow the crested rats and their parasites to withstand the toxic cardenolides” said co-author Jesús Maldonado of the Smithsonian Conservation Biology Institute and Weinstein’s Smithsonian-Mpala Postdoctoral fellowship co-advisor.

“We are looking at a broad range of questions influenced by habitat change. Humans have cleared forests to make farms and roads. We need to understand how that impacts their survival,” Agwanda said. Additionally, Agwanda is building an exhibit at the Museums of Kenya to raise awareness about this unique poisonous animal.
Microscopic image of the specialized hairs that the African crested rat anoints with poison from Acokanthera schimperi 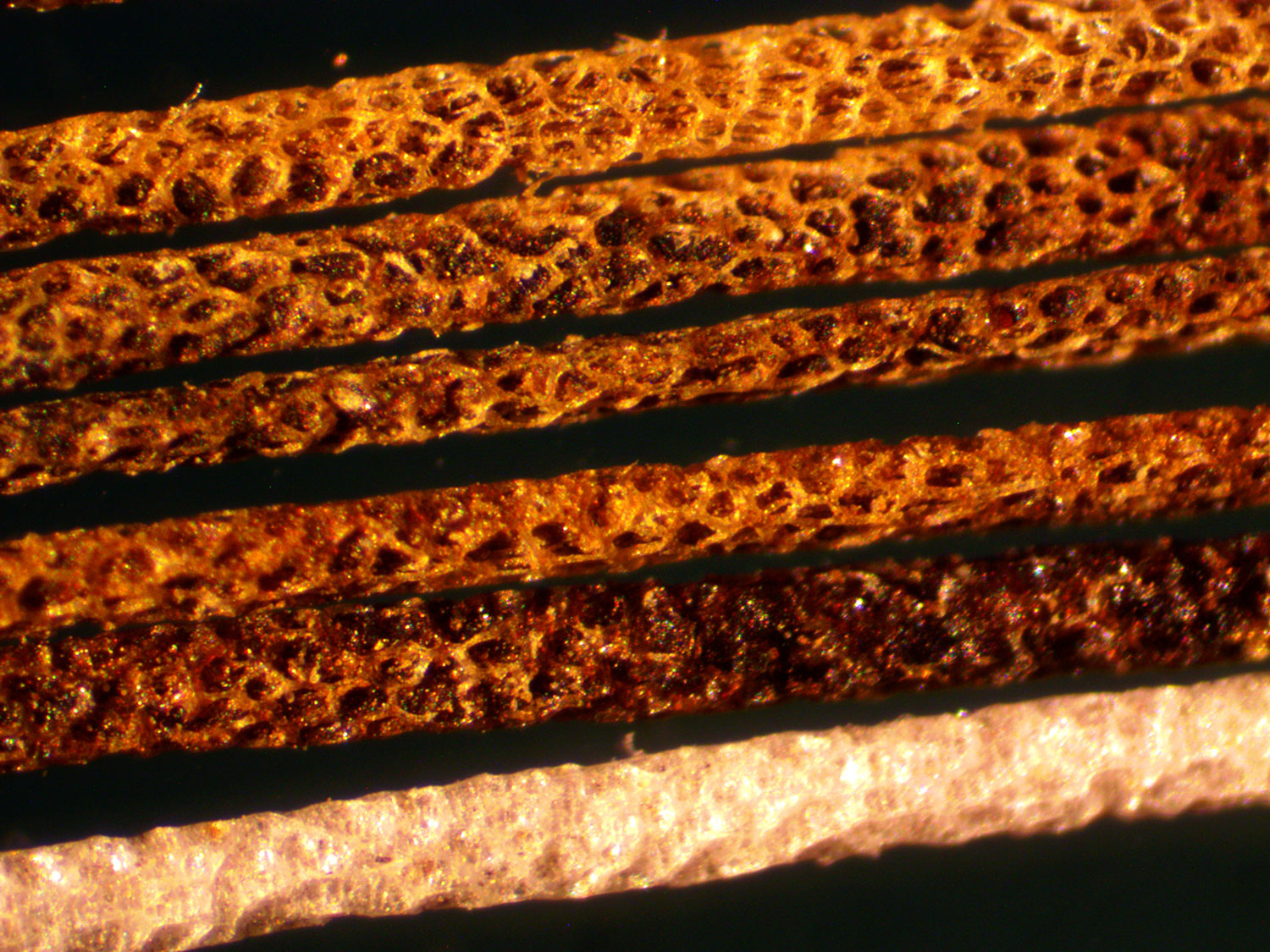 
About the Smithsonian’s National Zoo and Conservation Biology Institute

The Smithsonian’s National Zoo and Conservation Biology Institute leads the Smithsonian’s global effort to save species, better understand ecosystems and train future generations of conservationists. As Washington, D.C.’s favorite destination for families, the Zoo connects visitors to amazing animals and the people working to save them. In Front Royal, Virginia, across the United States and in more than 30 countries worldwide, Smithsonian Conservation Biology Institute scientists and animal care experts tackle some of today’s most complex conservation challenges by applying and sharing what they learn about animal behavior and reproduction, ecology, genetics, migration and conservation sustainability to save wildlife and habitats. Follow the Zoo on Facebook, Twitter and Instagram.

About the National Museums of Kenya
National Museums of Kenya (NMK) is a state corporation established by an Act of Parliament, the Museums and Heritage Act 2006. NMK is a multi-disciplinary institution whose role is to collect, preserve, study, document and present Kenya’s past and present cultural and natural heritage. This is for the purposes of enhancing knowledge, appreciation, respect and sustainable utilization of these resources for the benefit of Kenya and the world, for now and posterity. NMK’s mutual concern for the welfare of mankind and the conservation of the biological diversity of the East African region and that of the entire planet demands success in such efforts. In addition, NMK manages many Regional Museums, Sites and Monuments of national and international importance alongside priceless collections of Kenya’s living cultural and natural heritage. As an institution that must respond to the growing needs of the society, NMK is striving to contribute in a unique way to the task of national development.