Features That Could Make Someone a Virus Super-Spreader

New research from the University of Central Florida has identified physiological features that could make people super-spreaders of viruses such as COVID-19. 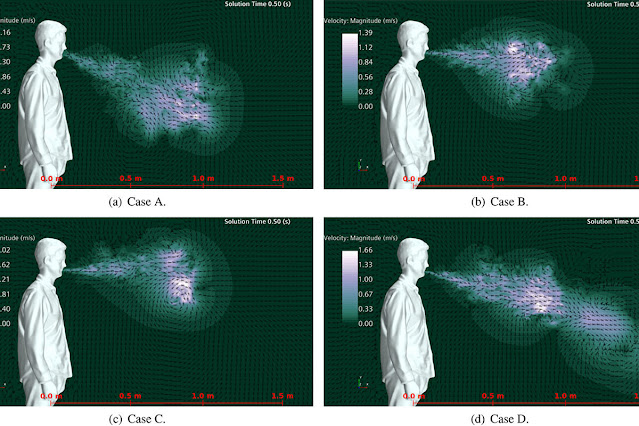 In a study appearing this month in the journal Physics of Fluids, researchers in UCF’s Department of Mechanical and Aerospace Engineering used computer-generated models to numerically simulate sneezes in different types of people and determine associations between people’s physiological features and how far their sneeze droplets travel and linger in the air.

They found that people’s features, like a stopped-up nose or a full set of teeth, could increase their potential to spread viruses by affecting how far droplets travel when they sneeze.

According to the U.S. Centers for Disease Control and Prevention, the main way people are infected by the virus that causes COVID-19 is through exposure to respiratory droplets, such as from sneezes and coughs that are carrying infectious virus.

Knowing more about factors affecting how far these droplets travel can inform efforts to control their spread, says Michael Kinzel, an assistant professor with UCF’s Department of Mechanical Engineering and study co-author.

“This is the first study that aims to understand the underlying ‘why’ of how far sneezes travel,” Kinzel says. “We show that the human body has influencers, such as a complex duct system associated with the nasal flow that actually disrupts the jet from your mouth and prevents it from dispersing droplets far distances.”

For instance, when people have a clear nose, such as from blowing it into a tissue, the speed and distance sneeze droplets travel decrease, according to the study.

This is because a clear nose provides a path in addition to the mouth for the sneeze to exit. But when people’s noses are congested, the area that the sneeze can exit is restricted, thus causing sneeze droplets expelled from the mouth to increase in velocity.

Similarly, teeth also restrict the sneeze’s exit area and cause droplets to increase in velocity.

“Teeth create a narrowing effect in the jet that makes it stronger and more turbulent,” Kinzel says. “They actually appear to drive transmission. So, if you see someone without teeth, you can actually expect a weaker jet from the sneeze from them.”

When they simulated sneezes in the different models, they found that the spray distance of droplets expelled when a person has a congested nose and a full set of teeth is about 60 percent greater than when they do not.

The results indicate that when someone keeps their nose clear, such as by blowing it into a tissue, that they could be reducing the distance their germs travel.

They found that thinner saliva resulted in sneezes comprised of smaller droplets, which created a spray and stayed in the air longer than medium and thick saliva.

For instance, three seconds after a sneeze, when thick saliva was reaching the ground and thus diminishing its threat, the thinner saliva was still floating in the air as a potential disease transmitter.

The work ties back to the researchers’ project to create a COVID-19 cough drop that would give people thicker saliva to reduce the distance droplets from a sneeze or cough would travel, and thus decrease disease-transmission likelihood.

“The results show exposure levels are highly dependent on the fluid dynamics that can vary depending on several human features,” Ahmed says. “Such features may be underlying factors driving superspreading events in the COVID-19 pandemic.”

The researchers say they hope to move the work toward clinical studies next to compare their simulation findings with those from real people from varied backgrounds.

Fontes says to advance the findings of the study, the research team wants to investigate the interactions between gas flow, mucus film and tissue structures within the upper respiratory tract during respiratory events.

“Numerical models and experimental techniques should work side by side to provide accurate predictions of the primary breakup inside the upper respiratory tract during those events,” he says.

“This research potentially will provide information for more accurate safety measures and solutions to reduce pathogen transmission, giving better conditions to deal with the usual diseases or with pandemics in the future,” he says.

The work was funded by the National Science Foundation.

Kinzel received his doctorate in aerospace engineering from Pennsylvania State University and joined UCF in 2018. In addition to being a member of UCF’s Department of Mechanical and Aerospace engineering, a part of UCF’s College of Engineering and Computer Science, he also works with UCF’s Center for Advanced Turbomachinery and Energy Research.

Ahmed is an associate professor in UCF’s Department of Mechanical and Aerospace Engineering, a faculty member of the Center for Advanced Turbomachinery and Energy Research, and the Florida Center for Advanced Aero-Propulsion. He served more than three years as a senior aero/thermo engineer at Pratt & Whitney military engines working on advanced engine programs and technologies. He also served as a faculty member at Old Dominion University and Florida State University. At UCF, he is leading research in propulsion and energy with applications for power generation and gas-turbine engines, propulsion-jet engines, hypersonics and fire safety, as well as research related to supernova science and COVID-19 transmission control. He earned his doctoral degree in mechanical engineering from the State University of New York at Buffalo. He is an American Institute of Aeronautics and Astronautics associate fellow and a U.S. Air Force Research Laboratory and Office of Naval Research faculty fellow.