Escape from Mars: How Water Fled the Red Planet 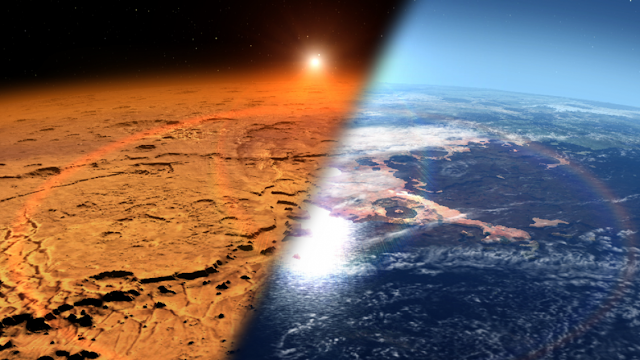 Credit: NASA's Goddard Space Flight Center
Mars once had oceans but is now bone-dry, leaving many to wonder how the water was lost. University of Arizona researchers have discovered a surprisingly large amount of water in the upper atmosphere of Mars, where it is rapidly destroyed, explaining part of this Martian mystery.

Shane Stone, a graduate student in the UArizona Lunar and Planetary Laboratory and lead author of a new paper published in Science, describes himself as a planetary chemist. Once a laboratory chemist who helped to develop polymers that could be used to wrap and deliver therapeutic drugs more efficiently, he now studies the chemistry of planetary atmospheres.

Since 2014, he has worked on NASA's MAVEN mission, short for Mars Atmosphere and Volatile Evolution. The MAVEN spacecraft began orbiting Mars in 2014 and has been recording the composition of the upper atmosphere of Earth's planetary neighbor ever since.

"We know that billions of years ago, there was liquid water on the surface of Mars," Stone said. "There must have been a thicker atmosphere, so we know that Mars somehow lost the majority of its atmosphere to space. MAVEN is trying to characterize the processes responsible for this loss, and one portion of that is understanding exactly how Mars lost its water."

Co-authors of the study include Roger Yelle, a UArizona planetary sciences professor and Stone's research adviser, as well as researchers from NASA Goddard Space Flight Center and the Center for Research and Exploration in Space Science and Technology in Maryland.

As MAVEN orbits Mars, it dips into the planet's atmosphere every 4 1/2 hours. The onboard NGIMS instrument – short for Neutral Gas and Ion Mass Spectrometer – has been measuring the abundance of charged water molecules called ions in the upper Martian atmosphere, about 100 miles from the planet's surface. From this information, scientists can infer how much water is present in the atmosphere.

Past observations using MAVEN and the Hubble Space Telescope showed that loss of water from the Martian upper atmosphere varies with the seasons. Compared to Earth, Mars takes a more oval-shaped path around the sun and is closest to it during summer in the Martian southern hemisphere.

Stone and his team found that when Mars is nearest the sun, the planet warms, and more water – found on the surface in the form of ice – moves from the surface to the upper atmosphere where it is lost to space. This happens once every Martian year or about every two Earth years. The regional dust storms that occur on Mars every Martian year and the global dust storms that occur across the planet about once every 10 years lead to further heating of the atmosphere and a surge in the upward movement of water.

The processes that make this cyclical movement possible contradict the classical picture of water escape from Mars, showing it is incomplete, Stone said. According to the classical process, ice formed from water is converted to a gas and is destroyed by the sun's rays in the lower atmosphere. This process, however, would play out as a slow, steady trickle, unaffected by the seasons or dust storms, which doesn't mesh with current observations.

"This is important because we didn't expect to see any water in the upper atmosphere of Mars at all," Stone said. "If we compare Mars to Earth, water on Earth is confined close to the surface because of something called the hygropause. It's just a layer in the atmosphere that's cold enough to condense (and therefore stop) any water vapor traveling upward."

The team argues that water is moving past what should be Mars' hygropause, which is likely too warm to stop the water vapor. Once in the upper atmosphere, water molecules are broken apart by ions very quickly – within four hours, they calculate – and the byproducts are then lost to space.

"The loss of its atmosphere and water to space is a major reason Mars is cold and dry compared to warm and wet Earth. This new data from MAVEN reveals one process by which this loss is still occurring today," Stone said.

A Dry and Dusty World

When the team extrapolated their findings back 1 billion years, they found that this process can account for the loss of a global ocean about 17 inches deep.

"If we took water and spread it evenly over the entire surface of Mars, that ocean of water lost to space due to the new process we describe would be over 17 inches deep," Stone said. "An additional 6.7 inches would be lost due solely to the effects of global dust storms."

During global dust storms, 20 times more water can be transported to the upper atmosphere. For example, one global dust storm lasting 45 days releases the same amount of water to space as Mars would lose during a calm Martian year, or 687 Earth days.

And while Stone and his team can't extrapolate farther back than 1 billion years, he thinks that this process likely didn't work the same before that, because Mars might have had a stronger hygropause long ago.

"Before the process we describe began to operate, there must have been a significant amount of atmospheric escape to space already," Stone said. "We still need to nail down the impact of this process and when it began to operate."

In the future, Stone would like to study the atmosphere of Saturn's moon Titan.

"Titan has an interesting atmosphere in which organic chemistry plays a significant role," Stone said. "As a former synthetic organic chemist, I'm eager to investigate these processes."