Ultraviolet light from giant stellar flares can destroy a planet’s habitability. New research from the University of North Carolina at Chapel Hill will help astrobiologists understand how much radiation planets experience during super flares and whether life could exist on worlds beyond our solar system.

Super flares are bursts of energy that are 10 to 1,000 times larger than the biggest flares from the Earth’s sun. These flares can bathe a planet in an amount of ultraviolet light huge enough to doom the chances of life surviving there. 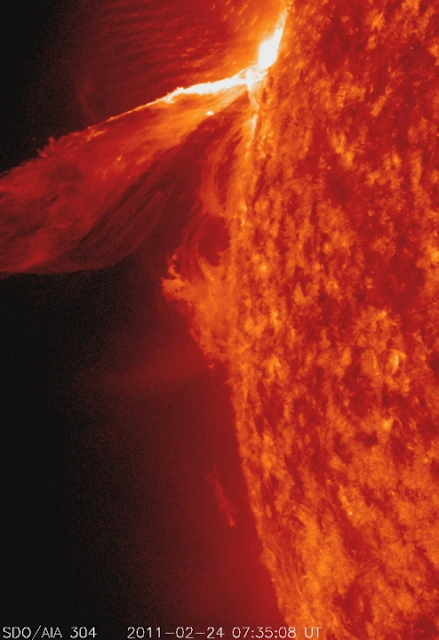 Credit: NASA / Wikimedia Commons
Researchers from UNC-Chapel Hill have for the first time measured the temperature of a large sample of super flares from stars, and the flares’ likely ultraviolet emissions. Their findings, published Oct. 5 ahead of print in Astrophysical Journal, will allow researchers to put limits on the habitability of planets that are targets of upcoming planet-finding missions.

“We found planets orbiting young stars may experience life-prohibiting levels of UV radiation, although some micro-organisms might survive,” said lead study author Ward S. Howard, a doctoral student in the Department of Physics and Astronomy at UNC-Chapel Hill.

The team’s research expands upon previous work that has largely focused on flare temperatures and radiation from only a handful of super flares from a few stars. In expanding the research, the team discovered a statistical relationship between the size of a super flare and its temperature. The temperature predicts the amount of radiation that potentially precludes on-surface life.
A modern solar flare recorded Dec. 5, 2006, by the X-ray Imager onboard NOAA's GOES-13 satellite. The flare was so intense, it actually damaged the instrument that took the picture. Researchers believe Carrington's flare was much more energetic than this one. 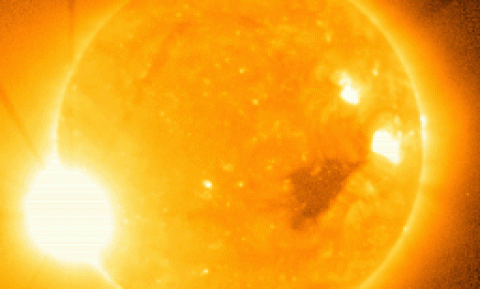 Credit: NASA
Super flares typically emit most of their UV radiation during a rapid peak lasting only five to 15 minutes. The simultaneous Evryscope and TESS observations were obtained at two-minute intervals, ensuring multiple measurements were taken during the peak of each super flare.

This is the first time the temperatures of such a large sample of super flares has ever been studied. The frequency of observations allowed the team to discover the amount of time super flares can cook orbiting planets with intense UV radiation.

The flares observed have already informed the TESS Extended Mission to discover thousands of exoplanets in orbit around the brightest dwarf stars in the sky. TESS is now targeting high priority flare stars from the UNC-Chapel Hill sample for more frequent observations.

“Longer term these results may inform the choice of planetary systems to be observed by NASA’s James Webb Space Telescope based on the system’s flaring activity,” said study co-author Nicholas M. Law, associate professor of physics and astronomy at UNC-Chapel Hill and principal investigator of the Evryscope telescope.

Contacts and sources:
University of North Carolina at Chapel Hill