Modern Humans Took Detours on Their Way to Europe

Favourable climatic conditions influenced the sequence of settlement movements of Homo sapiens in the Levant on their way from Africa to Europe. In a first step, modern humans settled along the coast of the Mediterranean Sea. Only then did they spread out into the Sinai desert and the eastern Jordanian Rift Valley. This is the result of archaeological research conducted by Collaborative Research Centre 'Our Way to Europe' (CRC 806) at the universities of Cologne, Bonn, and Aachen. The article 'Al-Ansab and the Dead Sea: mid-MIS 3 Archaeology and Environment of the Early Ahmarian Population of the Levantine Corridor' was published in PLOS ONE. 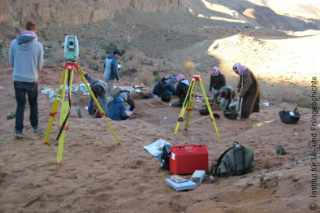 
For more than ten years, the team has been analysing sediments, pollen, and archaeological artefacts around the site of Al-Ansab 1 near the ancient ruin-city of Petra (Jordan). The goal was to gain an understanding of the environmental conditions that prevailed at the time of human expansion. 'Human presence consolidated in the region under favourable climate conditions', said Professor Dr Jürgen Richter, lead author of the study.
Petra, Ad Deir 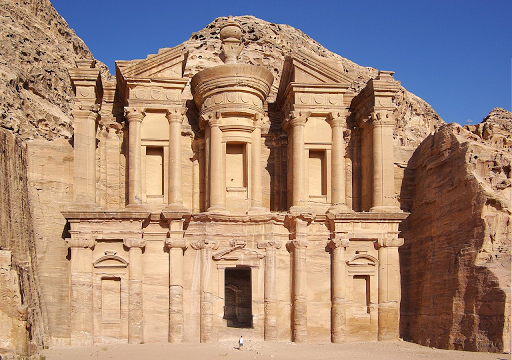 The success story of anatomically modern humans outside of Africa began about 100,000 years ago with well-known sites such as Qafzeh and Skhul in Israel. However, these early records only reveal a brief, temporary expansion of the territory into the Levant. Permanent settlement of the region only dates back to about 43,000 years ago, scientists believe. During the epoch of the so-called 'Early Ahmarian', modern humans gradually had been spreading throughout the Levant - a first step on their way to Asia and Europe.

Favourable climatic conditions were preconditions for permanent human settlement. On a large scale, this is illustrated by the presence of the so-called Lake Lisan. This freshwater lake was located where the Dead Sea is today. However, it was of a much larger extent and carried greater water volume. Most of the water evaporated only with the end of the last ice age, leaving behind the hypersaline Dead Sea known today.

Even on a small scale, the scientists were able to recognise the favourable environmental conditions: geo-archaeological teams from the University of Cologne and RWTH Aachen University examined the site of Al-Ansab 1. Whereas today, the Wadi Sabra, in which the site is located, is strongly shaped by seasonal flash floods, geomorphological and archaeological investigations showed that at the time of settlement, the conditions were less erosive and continuously wet, permitting the presence of humans.

'This enabled the spread of humans from the coastal Mediterranean area to the formerly drier regions of the Negev desert and the eastern slopes of the Jordan Rift Valley. They hunted gazelles in the open landscape - a prey we found in many sites in the region from this period', says Richter. 'Humans did not come by steady expansion out of Africa through the Levant and further to Europe and Asia. Rather, they first settled in a coastal strip along the Mediterranean Sea.'

The region around the site of Al-Ansab 1 therefore was a stepping stone on Homo sapiens' way - a journey that did not take a straight path to the European continent, but was guided by complex interactions between humans and their environment.