Discovery Enables Adult Skin To Regenerate Like A Newborn’s

A newly identified genetic factor allows adult skin to repair itself like the skin of a newborn babe. The discovery by Washington State University researchers has implications for better skin wound treatment as well as preventing some of the aging process in skin.

In a study, published in the journal eLife on Sept. 29, the researchers identified a factor that acts like a molecular switch in the skin of baby mice that controls the formation of hair follicles as they develop during the first week of life. The switch is mostly turned off after skin forms and remains off in adult tissue. When it was activated in specialized cells in adult mice, their skin was able to heal wounds without scarring. The reformed skin even included fur and could make goose bumps, an ability that is lost in adult human scars.
An image of a regenerating skin wound with hair follicles that can make goose bumps. The green lines are the muscles attached to individual regenerating hairs so that they can stand up. 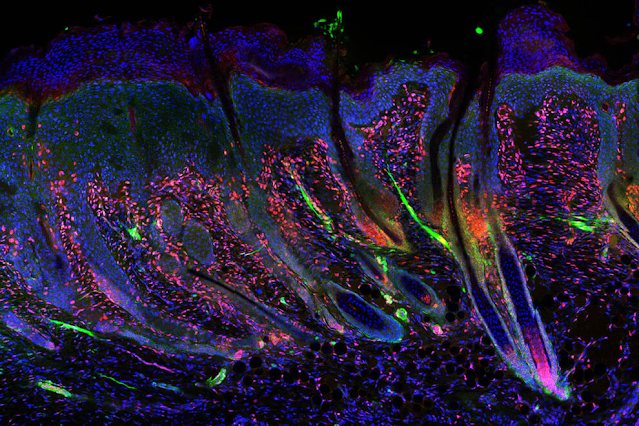 “We were able to take the innate ability of young, neonatal skin to regenerate and transfer that ability to old skin,” said Ryan Driskell, an assistant professor in WSU’s School of Molecular Biosciences. “We have shown in principle that this kind of regeneration is possible.”

Mammals are not known for their regenerative abilities compared to other organisms, such as salamanders that can regrow entire limbs and regenerate their skin. The WSU study suggests that the secret to human regeneration might be found by studying our own early development.

“We can still look to other organisms for inspiration, but we can also learn about regeneration by looking at ourselves,” said Driskell. “We do generate new tissue, once in our life, as we are growing.”

Driskell’s team used a new technique called single cell RNA sequencing to compare genes and cells in developing and adult skin. In developing skin, they found a transcription factor–proteins that bind to DNA and can influence whether genes are turned on or off. The factor the researchers identified, called Lef1, was associated with papillary fibroblasts which are developing cells in the papillary dermis, a layer of skin just below the surface that gives skin its tension and youthful appearance.

When the WSU researchers activated the Lef1 factor in specialized compartments of adult mouse skin, it enhanced the skins’ ability to regenerate wounds with reduced scarring, even growing new hair follicles that could make goose bumps.

Driskell first got the idea to look at early stages of mammalian life for the capacity to repair skin after learning of the work of Dr. Michael Longaker of Stanford University. When performing emergency life-saving surgery in utero, Longaker and his colleagues observed that when those babies were born they did not have any scars from the surgery.

A lot of work still needs to be done before this latest discovery in mice can be applied to human skin, Driskell said, but this is a foundational advance. With the support from a new grant from the National Institutes of Health, the WSU research team will continue working to understand how Lef1 and other factors work to repair skin. Also to help further this research, the Driskell lab has created an open, searchable web resource for the RNA sequence data for other scientists to access at skinregeneration.org.