Global energy consumption in 2050 could be reduced to the levels of the 1960s and still provide a decent standard of living for a population three times larger, according to a new study.

The study led by the University of Leeds has estimated the energy resource needed for everyone to be provided decent living standards in 2050 - meaning all their basic human needs such as shelter, mobility, food and hygiene are met, while also having access to modern, high quality healthcare, education and information technology.
The findings, published in in the journal Global Environmental Change, reveal that decent living standards could be provided to the entire global population of 10 billion that is expected to be reached by 2050, for less than 40% of today's global energy. This is roughly 25% of that forecast by the International Energy Agency if current trends continue.

This level of global energy consumption is roughly the same as that during the 1960s, when the population was only three billion.

The authors emphasise that achieving this would require sweeping changes in current consumption, widespread deployment of advanced technologies, and the elimination of mass global inequalities.

However, not only do the findings show that the energy required to provide a decent living could likely be met entirely by clean sources, but it also offers a firm rebuttal to reactive claims that reducing global consumption to sustainable levels requires an end to modern comforts and a 'return to the dark ages'.

The authors' tongue in cheek response to the critique that sweeping energy reform would require us all to become 'cave dwellers' was: "Yes, perhaps, but these are rather luxurious caves with highly-efficient facilities for cooking, storing food and washing clothes; comfortable temperatures maintained throughout the year, computer networks -- among other things -- not to mention the larger caves providing universal healthcare and education to all 5-19 year olds."

The study calculated minimum final energy requirements, both direct and indirect, to provide decent living standards. Final energy is that delivered to the consumer's door, for example, heating, electricity or the petrol that goes into a car, rather than the energy embedded in fuels themselves - much of which is lost at power stations in the case of fossil fuels.

The team built a final energy-model, which builds upon a list of basic material needs that underpin human well-being previously developed by Narasimha Rao and Jihoon Min.

The study compared current final energy consumption across 119 countries to the estimates of final energy needed for decent living and found the vast majority of countries are living in significant surplus. In countries that are today's highest per-capita consumers, energy cuts of nearly 95% are possible while still providing decent living standards to all.

Study lead author Dr Joel Millward-Hopkins from the School of Earth and Environment at Leeds said: "Currently, only 17% of global final energy consumption is from non-fossil fuel sources. But that is nearly 50% of what we estimate is needed to provide a decent standard of living for all in 2050."

"Overall, our study is consistent with the long-standing arguments that the technological solutions already exist to support reducing energy consumption to a sustainable level. What we add is that the material sacrifices needed to for these reductions are far smaller than many popular narratives imply."

Study co-author Professor Julia Steinberger leader of the Living Well Within Limits project at the University Leeds and professor at the Université de Lausanne in Switzerland said: "While government official are levelling charges that environmental activists 'threaten our way of life' it is worth re-examining what that way of life should entail. There has been a tendency to simplify the idea of a good life into the notion that more is better.

"It is clearly within our grasp to provide a decent life for everyone while still protecting our climate and ecosystems."
Fig. 3. . Decent living energy per capita (in final energy), broken down into consumption categories and subcategories detailed in Table 1. Our global average is shown alongside data for Rwanda, Uruguay and Kyrgyzstan. Dashed lines indicating our global mean, minimum and maximum are also shown (15.3, 13.0, and 18.4 GJ/cap/yr, respectively 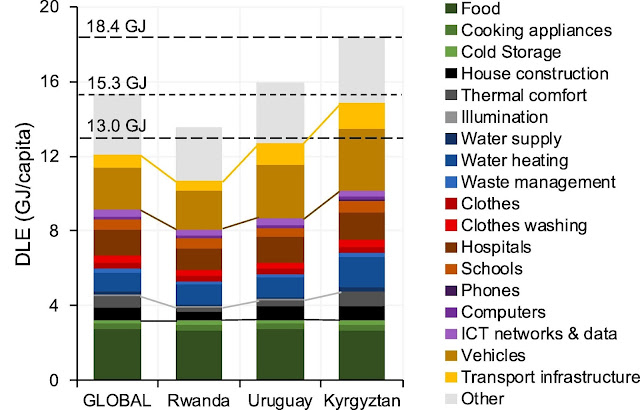 Credit: Providing decent living with minimum energy: A global scenario
Study co-author Professor Narasimha Rao from Yale University said: "This study also confirms our earlier findings at a global scale that eradicating poverty is not an impediment to climate stabilization, rather it's the pursuit of unmitigated affluence across the world."

Study co-author Yannick Oswald, PhD researcher at the School of Earth and Environment at Leeds said: "To avoid ecological collapse, it is clear that drastic and challenging societal transformations must occur at all levels, from the individual to institutional, and from supply through to demand."

The paper Providing "Decent Living with Minimum Energy: A Global Scenario" was published in Global Environmental Change on 29 September 2020