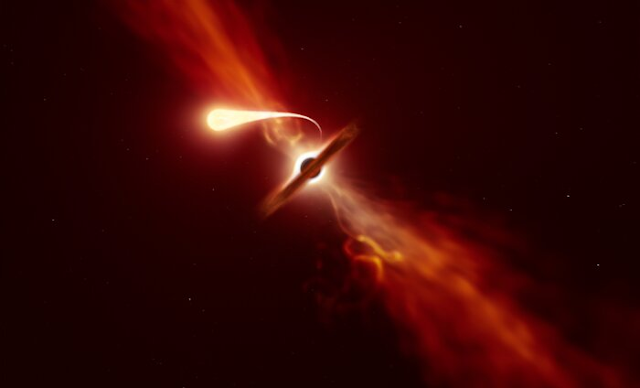 “The idea of a black hole ‘sucking in’ a nearby star sounds like science fiction. But this is exactly what happens in a tidal disruption event,” says Matt Nicholl, a lecturer and Royal Astronomical Society research fellow at the University of Birmingham, UK, and the lead author of the new study. But these tidal disruption events, where a star experiences what’s known as spaghettification as it’s sucked in by a black hole, are rare and not always easy to study. The team of researchers pointed ESO’s Very Large Telescope (VLT) and ESO’s New Technology Telescope (NTT) at a new flash of light that occurred last year close to a supermassive black hole, to investigate in detail what happens when a star is devoured by such a monster.

Astronomers know what should happen in theory. “When an unlucky star wanders too close to a supermassive black hole in the centre of a galaxy, the extreme gravitational pull of the black hole shreds the star into thin streams of material,” explains study author Thomas Wevers, an ESO Fellow in Santiago, Chile, who was at the Institute of Astronomy, University of Cambridge, UK, when he conducted the work. As some of the thin strands of stellar material fall into the black hole during this spaghettification process, a bright flare of energy is released, which astronomers can detect.

The discovery was possible because the tidal disruption event the team studied, AT2019qiz, was found just a short time after the star was ripped apart. “Because we caught it early, we could actually see the curtain of dust and debris being drawn up as the black hole launched a powerful outflow of material with velocities up to 10 000 km/s,” says Kate Alexander, NASA Einstein Fellow at Northwestern University in the US. “This unique ‘peek behind the curtain' provided the first opportunity to pinpoint the origin of the obscuring material and follow in real time how it engulfs the black hole.”

The team carried out observations of AT2019qiz, located in a spiral galaxy in the constellation of Eridanus, over a 6-month period as the flare grew in luminosity and then faded away. “Several sky surveys discovered emission from the new tidal disruption event very quickly after the star was ripped apart,” says Wevers. “We immediately pointed a suite of ground-based and space telescopes in that direction to see how the light was produced.”
This video sequence zooms in on the galaxy where the AT2019qiz tidal disruption event is taking place. This phenomenon, a blast of light from a star being ripped apart by a supermassive black hole, has been studied by ESO telescopes.
<iframe width="690" height="387" src="https://www.youtube.com/embed/5r5Jb4Zdc_E" frameborder="0" allow="accelerometer; autoplay; clipboard-write; encrypted-media; gyroscope; picture-in-picture" allowfullscreen></iframe>
Credit: ESO/Digitized Sky Survey 2/N. Risinger (skysurvey.org). Music: Astral Electronics

Multiple observations of the event were taken over the following months with facilities that included X-shooter and EFOSC2, powerful instruments on ESO’s VLT and ESO’s NTT, which are situated in Chile. The prompt and extensive observations in ultraviolet, optical, X-ray and radio light revealed, for the first time, a direct connection between the material flowing out from the star and the bright flare emitted as it is devoured by the black hole. “The observations showed that the star had roughly the same mass as our own Sun, and that it lost about half of that to the monster black hole, which is over a million times more massive,” says Nicholl, who is also a visiting researcher at the University of Edinburgh.
This chart shows the location of AT2019qiz, a tidal disruption event, in the constellation of Eridanus. The map includes most of the stars visible to the unaided eye under good conditions, and the location of AT2019qiz is indicated by a red circle. 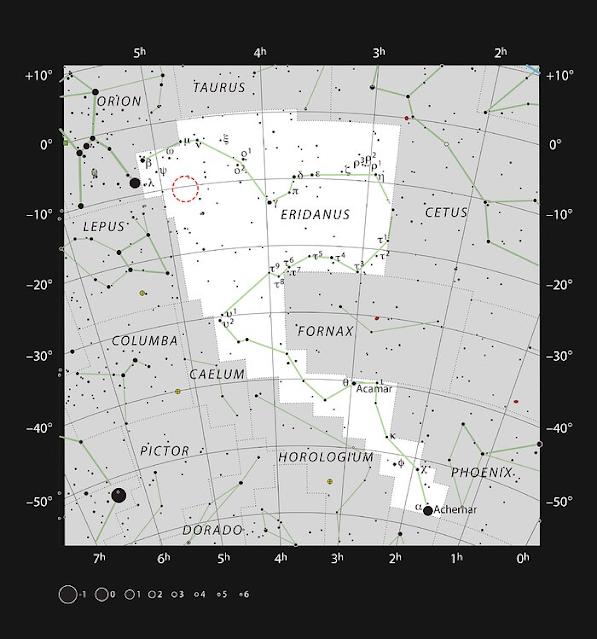 This research was presented in the paper “An outflow powers the optical rise of the nearby, fast-evolving tidal disruption event AT2019qiz” to appear in Monthly Notices of the Royal Astronomical Society (doi: 10.1093/mnras/staa2824). Research paper

ESO is the foremost intergovernmental astronomy organisation in Europe and the world’s most productive ground-based astronomical observatory by far. It has 16 Member States: Austria, Belgium, the Czech Republic, Denmark, France, Finland, Germany, Ireland, Italy, the Netherlands, Poland, Portugal, Spain, Sweden, Switzerland and the United Kingdom, along with the host state of Chile and with Australia as a Strategic Partner. ESO carries out an ambitious programme focused on the design, construction and operation of powerful ground-based observing facilities enabling astronomers to make important scientific discoveries. ESO also plays a leading role in promoting and organising cooperation in astronomical research. ESO operates three unique world-class observing sites in Chile: La Silla, Paranal and Chajnantor. At Paranal, ESO operates the Very Large Telescope and its world-leading Very Large Telescope Interferometer as well as two survey telescopes, VISTA working in the infrared and the visible-light VLT Survey Telescope. Also at Paranal ESO will host and operate the Cherenkov Telescope Array South, the world’s largest and most sensitive gamma-ray observatory. ESO is also a major partner in two facilities on Chajnantor, APEX and ALMA, the largest astronomical project in existence. And on Cerro Armazones, close to Paranal, ESO is building the 39-metre Extremely Large Telescope, the ELT, which will become “the world’s biggest eye on the sky”.

Contacts and sources:
Matt Nicholl
School of Physics and Astronomy and Institute of Gravitational Wave Astronomy, University of Birmingham

Kate Alexander
Center for Interdisciplinary Exploration and Research in Astrophysics and Department of Physics and Astronomy, Northwestern University