Cannabis Reduces OCD Symptoms by Half in the Short-Term

People with obsessive-compulsive disorder, or OCD, report that the severity of their symptoms was reduced by about half within four hours of smoking cannabis, according to a Washington State University study.
Buds of marijuana (cannabis indica inflorescence) in a small green ceramic cup. 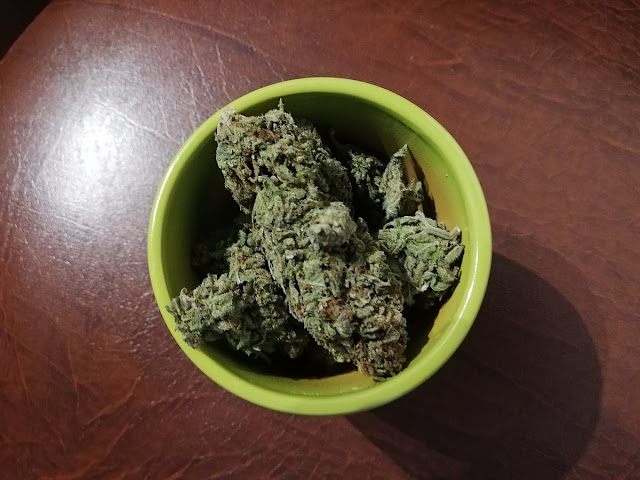 The researchers analyzed data inputted into the Strainprint app by people who self-identified as having OCD, a condition characterized by intrusive, persistent thoughts and repetitive behaviors such as compulsively checking if a door is locked. After smoking cannabis, users with OCD reported it reduced their compulsions by 60%, intrusions, or unwanted thoughts, by 49% and anxiety by 52%.

The study, recently published in the Journal of Affective Disorders, also found that higher doses and cannabis with higher concentrations of CBD, or cannabidiol, were associated with larger reductions in compulsions.

"The results overall indicate that cannabis may have some beneficial short-term but not really long-term effects on obsessive-compulsive disorder," said Carrie Cuttler, the study's corresponding author and WSU assistant professor of psychology. "To me, the CBD findings are really promising because it is not intoxicating. This is an area of research that would really benefit from clinical trials looking at changes in compulsions, intrusions and anxiety with pure CBD."

The WSU study drew from data of more than 1,800 cannabis sessions that 87 individuals logged into the Strainprint app over 31 months. The long time period allowed the researchers to assess whether users developed tolerance to cannabis, but those effects were mixed. As people continued to use cannabis, the associated reductions in intrusions became slightly smaller suggesting they were building tolerance, but the relationship between cannabis and reductions in compulsions and anxiety remained fairly constant.

Traditional treatments for obsessive-compulsive disorder include exposure and response prevention therapy where people's irrational thoughts around their behaviors are directly challenged, and prescribing antidepressants called serotonin reuptake inhibitors to reduce symptoms. While these treatments have positive effects for many patients, they do not cure the disorder nor do they work well for every person with OCD.

"We're trying to build knowledge about the relationship of cannabis use and OCD because it's an area that is really understudied," said Dakota Mauzay, a doctoral student in Cuttler's lab and first author on the paper.

Aside from their own research, the researchers found only one other human study on the topic: a small clinical trial with 12 participants that revealed that there were reductions in OCD symptoms after cannabis use, but these were not much larger than the reductions associated with the placebo.

The WSU researchers noted that one of the limitations of their study was the inability to use a placebo control and an "expectancy effect" may play a role in the results, meaning when people expect to feel better from something they generally do. The data was also from a self-selected sample of cannabis users, and there was variability in the results which means that not everyone experienced the same reductions in symptoms after using cannabis.

However, Cuttler said this analysis of user-provided information via the Strainprint app was especially valuable because it provides a large data set and the participants were using market cannabis in their home environment, as opposed to federally grown cannabis in a lab which may affect their responses. Strainprint's app is intended to help users determine which types of cannabis work the best for them, but the company provided the WSU researchers free access to users' anonymized data for research purposes.

Cuttler said this study points out that further research, particularly clinical trials on the cannabis constituent CBD, may reveal a therapeutic potential for people with OCD.

This is the fourth study Cuttler and her colleagues have conducted examining the effects of cannabis on various mental health conditions using the data provided by the app created by the Canadian company Strainprint. Others include studies on how cannabis impacts PTSD symptoms, reduces headache pain, and affects emotional well-being.