The condition of the Nebra sky disk before being transferred to the Landesmuseum Halle an der Saale. 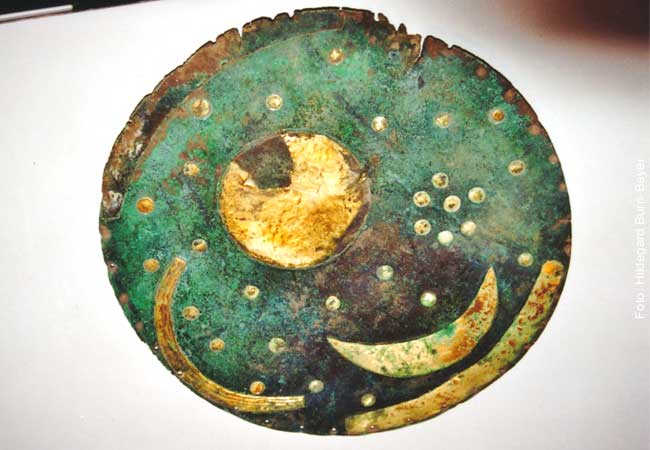 Until now the Nebra sky disk was deemed to be from the Early Bronze Age and therefore the world’s oldest depiction of the cosmos. Archaeologists from Goethe University Frankfurt and Ludwig-Maximilian University in Munich have now reanalysed diverse data on the reconstruction of the discovery site and surrounding circumstances of the find. Their findings are that the disk must be dated in the Iron Age, making it about 1,000 years younger than previously assumed. This makes all previous astronomical interpretations obsolete.

The Nebra sky disk is one of Germany’s most significant archaeological finds and was included in the UNESCO Memory of the World Register in 2013. It was discovered in an illegal excavation in 1999 together with Bronze Age swords, axes and bracelets according to the finders. This discovery context was important for the scientific dating, as the disk itself could neither be scientifically nor archeologically dated by comparison with other objects.

Many years of investigations by several research groups therefore attempted to verify both the attribution to the supposed discovery site as well as the common origins of the objects independent of the vague information given by the looters.

Rupert Gebhard, Director of the Munich Archäologischen Staatssammlung, and Rüdiger Krause Professor for Prehistory and Early European History at Goethe University Frankfurt have now extensively analysed the discovery circumstances and research results on the Nebra sky disk. Their conclusion:

The site that was considered the discovery site until today and which was investigated in subsequent excavations is with high probability not the discovery site of the looters. Furthermore, there is no convincing evidence that the Bronze Age swords, axes and bracelets form an ensemble of common origins. For this reason, it must be assumed that this is not a typical Bronze Age deposit and that the disk was not found together with the other objects in an original state at the excavation site.

Bronze Age swords, axes and bracelets, supposedly found together with the Nebra sky disk. Condition before being transferred to the Landesmuseum Halle an der Saale. 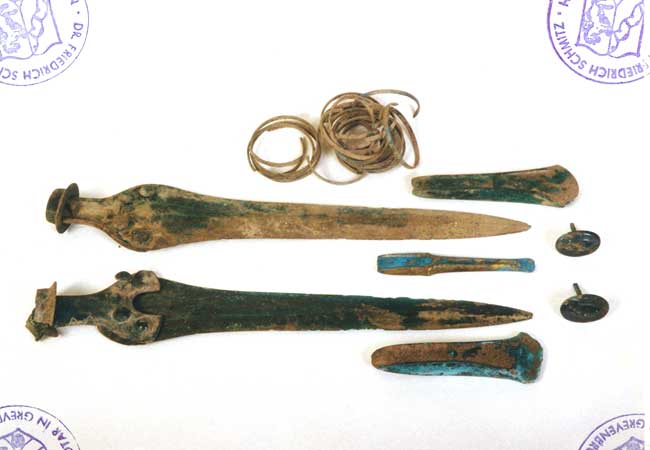 According to the archaeologists, this means that the disk must be investigated and evaluated as an individual find. Culturally and stylistically, the sky disk cannot be fitted into the Early Bronze Age motif world of the beginning of the second millennium B.C. On the contrary, clearer references can be made to the motif world of the Iron Age of the first millennium B.C.

According to Gebhard and Krause, on the basis of a divergent data situation and on the basis of this new assessment, all previous, sometimes far-reaching cultural-historical conclusions must be discussed anew and with an open mind, and the disk must be interpreted and evaluated in different contexts than before. The basis for this must be the submission of all previously unpublished data and facts.

More detailed information can be found on the website of the Deutsche Gesellschaft für Ur- und Frühgeschichte (German Society for Prehistory and Early History) https://dguf.de/himmelsscheibe.html