Scientists from the University of Bristol and the Royal Veterinary College (RVC) used three-dimensional computer modelling to investigate the hindlimb of Euparkeria capensis–a small reptile that lived in the Triassic Period 245 million years ago–and inferred that it had a “mosaic” of functions in locomotion.
Life reconstruction of Euparkeria highlighting the body parts investigated in this study. 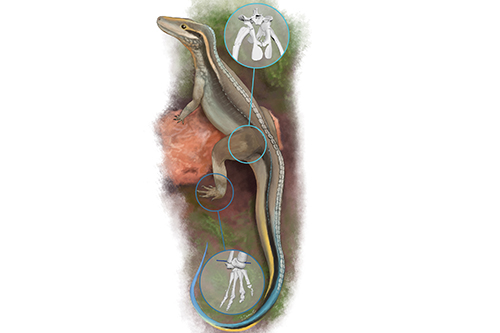 The study, which was published today in Scientific Reports, was led by researcher Oliver Demuth, joined by Professors Emily Rayfield (Bristol) and John Hutchinson (RVC). Their new micro-computed tomography scans of multiple specimens revealed unprecedented information about the previously hidden shape of the hip bones and structure of the foot and ankle joint.

Euparkeria has been known from numerous fossil specimens since the early 1900s and was found to be a close relative of the last common ancestor of both crocodiles and birds. While birds and crocodiles show different locomotion strategies, two-legged birds with an upright (erect) posture, shared with two and four-legged dinosaurs, and crocodiles having a four-legged (quadrupedal) sprawling posture, their ancestor once shared a common mode of locomotion and Euparkeria can provide vital insight into how these differences came to be.
The oblique ankle joint did not allow Euparkeria to assume a fully upright posture as the foot also turns medially when the ankle joint is extended. An ankle joint allowing a more upright posture evolved later independent from the hip structure. 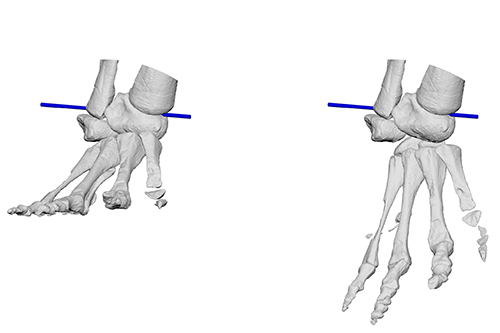 The authors’ new reconstruction of the hip structure showed that Euparkeria had a distinctive bony rim on the pelvis, called a supra-acetabular rim, covering the top of the hip joint. This feature was previously known only from later archosaurs on the line to crocodiles and often was used to infer a more erect posture for these animals; reversed in crocodiles as they became more amphibious. The hooded rim allowed the pelvis to cover the top of the thigh bone and support the body with the limbs in a columnar arrangement; hence this type of joint is called ‘pillar-erect’. Euparkeria is so far the earliest reptile with this structure preserved. Could it therefore have assumed a more erect, rather than more sprawling, posture as well?

To test how the hindlimb could or could not have moved in life, the team estimated how far the thigh bone could have rotated until it collided with the hip bones, and their models addressed how the ankle joint could have been posed, too. The computer simulations suggested that while the thigh bone could have been held in an erect posture, the foot could not have been placed steadily on the ground due to the way the foot rotates around the ankle joint, implying a more sprawling posture. However, the bony rim covering the hip joint restricted the movement of the thigh bone in a way that is unknown in any living animal capable of a more sprawling gait, hinting at a more upright posture.
This projection of the hip bone above the hip joint is called "supra-acetabular rim" and allowed to tuck the limbs under the body to support the body in a columnar arrangement. 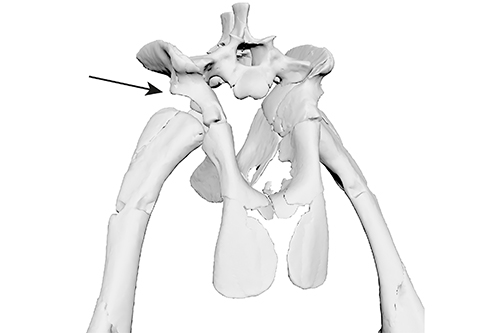 The team’s simulations thus revealed seemingly contradictory patterns in the hip and ankle joint. While Euparkeria is so far the earliest reptile with this peculiar hip structure, an ankle joint allowing a more erect posture appeared later on in Triassic archosaurs. Dr John Hutchinson, Professor of Evolutionary Biomechanics at the RVC, commented:

“The mosaic of structures present in Euparkeria, then, can be seen as a central stepping-stone in the evolution of locomotion in archosaurs.”

First author Oliver Demuth, research technician at the RVC and former Masters student at the University of Bristol, commented:

“The hip structure of Euparkeria was extremely surprising, especially as it functionally contradicts the ankle joint. Previously it was thought that both were linked and evolved synchronously. However, we were able to demonstrate that these traits were in fact decoupled and evolved in a step-wise fashion.”

Dr Emily Rayfield, Professor of Palaeobiology at the University of Bristol commented:

“This approach is exciting because Using CT scan datasets and computer models of how the bones and joints fitted together has allowed us to test long-standing ideas of how these ancient animals moved and how the limbs of the earliest ancestors of birds, crocodiles and dinosaurs may have evolved”