On the left, the signs of the fractions in Linear A; on the right, one of the tablets analyzed. 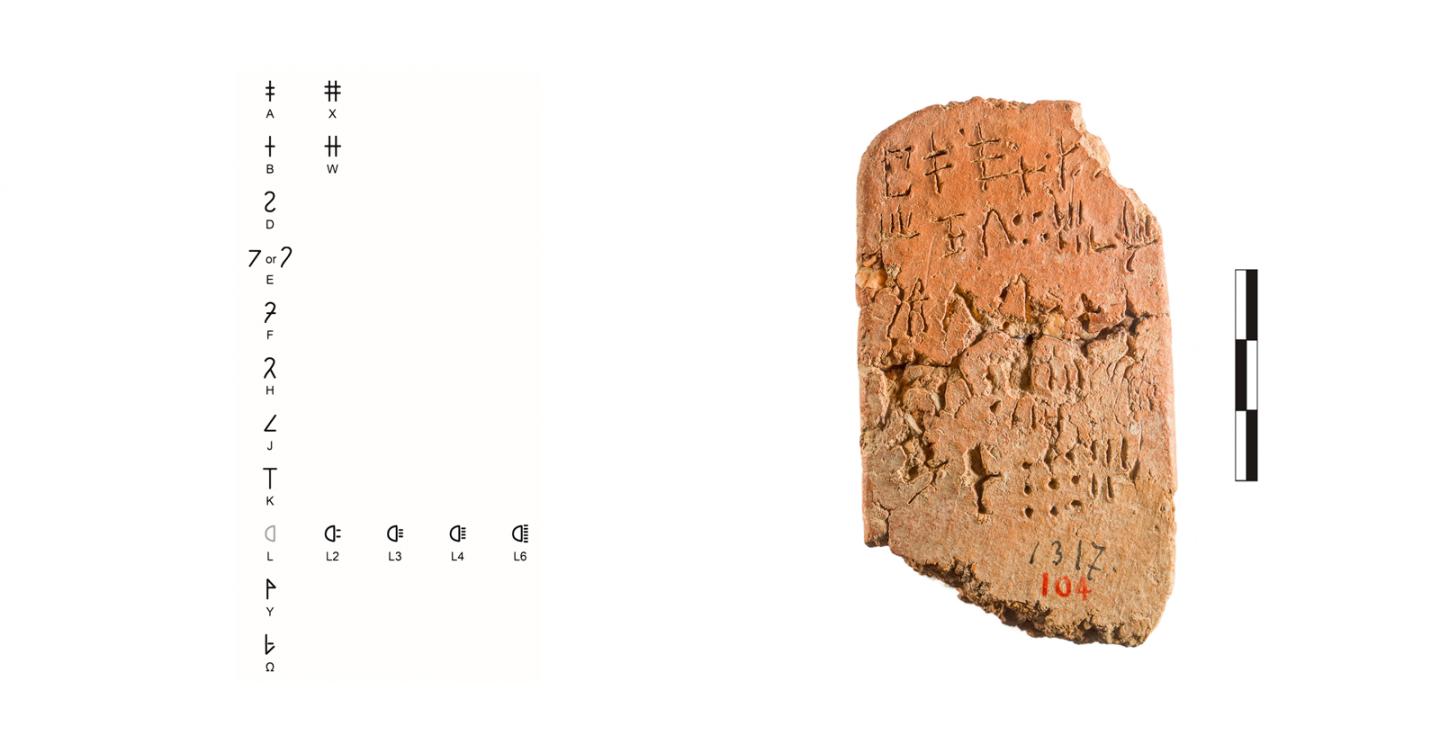 A recent study by a team based at the University of Bologna, published in the Journal of Archaeological Science, has shed new light on the Minoan system of fractions, one of the outstanding enigmas tied to the ancient writing of numbers.

About 3,500 years ago, the Minoan civilization on the island of Crete developed a writing system composed of syllabic signs, called Linear A, which they sometimes used to inscribe offerings at sanctuaries and adorn their jewelry, but mainly assisted the administration of their palatial centers.

Today, this script remains largely undeciphered and includes a complex system of numerical notation with signs that indicated not only whole numbers, but also fractions (such as 1/2, 1/4, 1/8, etc.). While the whole numbers were deciphered decades ago, scholars have been debating on the exact mathematical values of the fractional signs.

Principal Investigator Silvia Ferrara, Professor of the Department of Classical Philology and Italian Studies of the University of Bologna, said: "We aimed to solve the problem through a lens combining different strands of research, very seldom tied together: close paleographical analysis of the signs and computational methods. In this way we realized that we could access information from a new perspective."

The members of the European Research Council project INSCRIBE (Invention of Scripts and their Beginnings), Michele Corazza, Barbara Montecchi, Miguel Valério, and Fabio Tamburini, led by Dr. Ferrara, applied a method that combines the analysis of the sign shapes and their use in the inscriptions together with statistical, computational and typological strategies to assign mathematical values to the Linear A signs for fractions.

The team first studied the rules that the signs followed on the clay tablets and other accounting documents. Two problems had so far complicated the decipherment of Linear A fractions. First, all documents containing sums of fractional values with a registered total were damaged or difficult to interpret, and second, they contradicted uses of certain signs, which suggest the system changed over time. Thus, the starting premise had to rely on documents concentrated to a specific period (ca. 1600-1450 BCE), when the numerical system was in coherent use across Crete.

To investigate the possible values of each fractional sign, the team excluded impossible outcomes with the aid of computational methods. Then all possible solutions - almost four million - were whittled down also comparing fractions that are common in the history of the world (e.g., typological data) and using statistical tests. Finally, the team applied other strategies that considered the completeness and coherence of the fractions as a system and in this way the best values were identified, with the least redundancies. The result, in this case, was a system whose lowest fraction is 1/60 and which shows the ability to represent most values of the type n/60.

The system of values suggested by the Bologna team has yielded further important implications.

The results explain how the Linear B script, adopted by the later Mycenaean Greek culture (ca. 1450-1200 BCE) from Linear A, reused some of these fractions to express units of measurement. The new results suggest that, for example, the Linear A sign for 1/10 was adapted to represent a capacity unit for measuring dry products which was, in turn, 1/10 of a larger unit. This explains a historical continuity of use from fractions to units of measurements across two different cultures.

This research aims to show that traditional methods and computational models, when used in synergy, can help us make remarkable progress into explaining some unresolved issues tied to ancient scripts that are still undeciphered.

Publication: "The mathematical values of fraction signs in the Linear A script: A computational, statistical and typological approach," by Michele Corazza, Silvia Ferrara, Barbara Montecchi, Fabio Tamburini, and Miguel Valério (https://doi.org/10.1016/j.jas.2020.105214). It appears in Journal of Archaeological Science (September 2020), published by Elsevier.