A 48,000 Year Old Tooth Belonged to One of the Last Neanderthals in Northern Italy

A milk-tooth found in the vicinity of "Riparo del Broion" on the Berici Hills in the Veneto region bears evidence of one of the last Neanderthals in Italy. This small canine tooth belonged to a child between 11 and 12 that had lived in that area around 48,000 years ago. This is the most recent Neanderthal finding in Northern Italy.

The study uncovering this tooth was carried out by a group of researchers from the Universities of Bologna and Ferrara, who have recently published a paper in the Journal of Human Evolution. "This work stems from the synergy between different disciplines and specializations", says Matteo Romandini, lead author of this study and researcher at the University of Bologna. "High-resolution prehistoric field-archaeology allowed us to find the tooth, then we employed virtual approaches to the analyses of its shape, genome, taphonomy and of its radiometric profile. Following this process, we could identify this tooth as belonging to a child that was one of the last Neanderthals in Italy".
An upper canine milk-tooth that belonged to a Neanderthal child, aged 11 or 12, that lived between 48,000 and 45,000 years ago.

Credit: Journal of Human Evolution
The genetic analysis reveals that the owner of the tooth found in Veneto was a relative, on their mother's side, of Neanderthals that had lived in Belgium. This makes this site in Veneto a key-area for comprehending the gradual extinction of Neanderthals in Europe.

"This small tooth is extremely important", according to Stefano Benazzi, professor at the University of Bologna and research coordinator. "This is even more relevant if we consider that, when this child who lived in Veneto lost their tooth, Homo Sapiens communities were already present a thousand kilometres away in Bulgaria".

Researchers analysed the tooth by employing highly innovative virtual methods. "The techniques we employed to analyse the tooth led to the following discovery: this is an upper canine milk-tooth that belonged to a Neanderthal child, aged 11 or 12, that lived between 48,000 and 45,000 years ago", as report Gregorio Oxilia and Eugenio Bortolini, who are co-authors of the study and researchers at the University of Bologna. "According to this dating, this little milk-tooth is the most recent finding of the Neanderthal period in Northern Italy and one of the latest in the entire peninsula".
The findings retrieved from the "Riparo del Broion" are still being analysed. However, preliminary results show that this site had been used for a long period of time as there are signs of hunting activities and butchering of large prays. 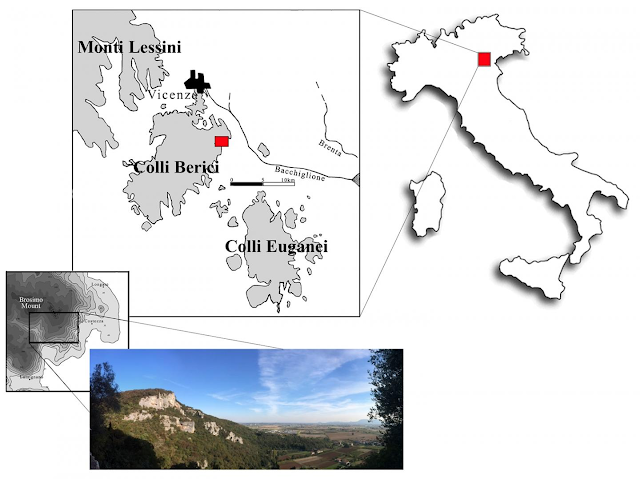 Credit:  Journal of Human Evolution
The findings retrieved from the "Riparo del Broion" are still being analysed. However, preliminary results show that this site had been used for a long period of time as there are signs of hunting activities and butchering of large prays. "The manufacturing of tools, mainly made of flint, shows Neanderthals' great adaptability and their systematic and specialized exploitation of the raw materials available in this area", adds Marco Peresanti, a professor of the University of Ferrara who contributed to the study.
The paper reporting about the results of this study was published in the Journal of Human Evolution and its title is "A late Neanderthal tooth from northeastern Italy". Matteo Romandini, Gregorio Oxilia, Eugenio Bortolini, Simona Arrighi, Federica Badino, Carla Figus, Federico Lugli, Giulia Marciani, Sara Silvestrini and Stefano Benazzi (all from the Department of Cultural Heritage) participated in the study proudly representing the University of Bologna.

This research was carried out in the framework of the ERC SUCCESS project, which is led by Stefano Benazzi and focuses on the bio-cultural changes happened in Italy during the transition between Neanderthal and Sapiens. The ultimate goals of the project are to understand when our species reached Southern Europe, the processes favouring Sapiens' adaptive success and the causes leading to Neanderthals' extinction.

This project has also involved the Departments of Human Evolution and Genetics of the Max Planck Institute (Germany), the Oxford Radiocarbon Accelerator Unit (UK), the DANTE Laboratory of the La Sapienza University and the Bioarchaeology Service of the Museum of Civilization in Rome.

Research at the site "Riparo del Broion" has started in 1998 and is currently under the joint scientific direction of Matteo Romandini (University of Bologna) and Matteo Peresani (University of Ferrara). This site has been made available through the Ministry of Cultural Heritage and Activities and thanks to the support of the Veneto region, Longare city council (Vicenza, Veneto), Leakey Foundation, CariVerona Foundation, the Italian Institute of Proto- and Prehistory and the ERC SUCCESS project.