Scientists isolated powerful coronavirus-neutralizing antibodies from COVID-19 patients and successfully tested it in animals, all in less than seven weeks.


A human antibody (blue) attaches to the receptor binding domain (red) on the SARS-CoV-2 virus. 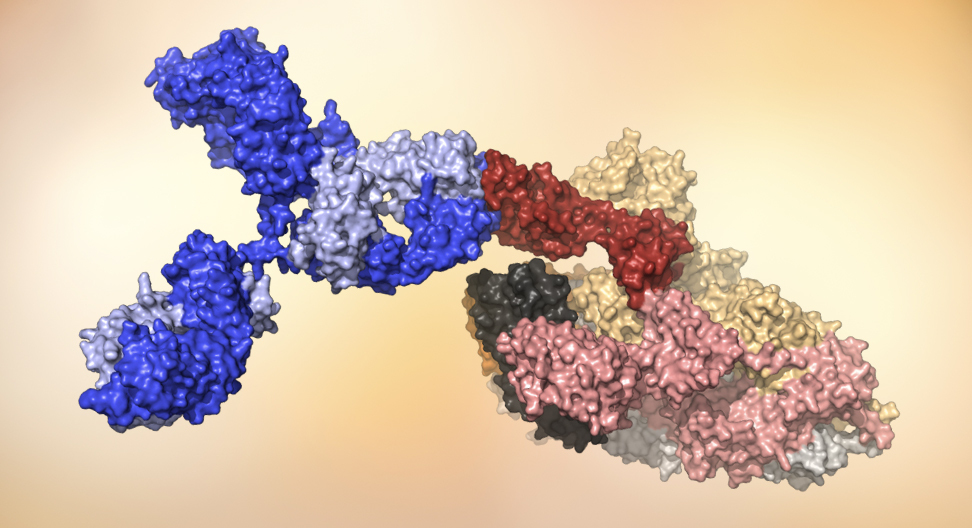 Model courtesy of the Burton lab


A team led by Scripps Research has discovered antibodies in the blood of recovered COVID-19 patients that provide powerful protection against SARS-CoV-2, the coronavirus that causes the disease, when tested in animals and human cell cultures.

The research, published today in Science, offers a paradigm of swift reaction to an emergent and deadly viral pandemic, and sets the stage for clinical trials and additional tests of the antibodies, which are now being produced as potential treatments and preventives for COVID-19.

“The discovery of these very potent antibodies represents an extremely rapid response to a totally new pathogen,” says study co-senior author Dennis Burton, PhD, the James and Jessie Minor Chair in Immunology in the Department of Immunology & Microbiology at Scripps Research.

In principle, injections of such antibodies could be given to patients in the early stage of COVID-19 to reduce the level of virus and protect against severe disease. The antibodies also may be used to provide temporary, vaccine-like protection against SARS-CoV-2 infection for healthcare workers, elderly people and others who respond poorly to traditional vaccines or are suspected of a recent exposure to the coronavirus.

“It has been a tremendous collaborative effort, and we’re now focused on making large quantities of these promising antibodies for clinical trials,” says co-lead author Thomas Rogers, MD, PhD, an adjunct assistant professor in the Department of Immunology & Microbiology at Scripps Research, and assistant professor of Medicine at UC San Diego.

An approach that’s worked for other deadly viruses

Developing a treatment or vaccine for severe COVID-19 is currently the world’s top public health priority. Globally, almost 8 million people have tested positive for SARS-CoV-2 infection, and more than 400,000 have died of severe COVID-19. The daily toll of new infections is still rising.

One approach to new viral threats is to identify, in the blood of recovering patients, antibodies that neutralize the virus’s ability to infect cells.

These antibodies can then be mass-produced, using biotech methods, as a treatment that blocks severe disease and as a vaccine-like preventive that circulates in the blood for several weeks to protect against infection. This approach already has been demonstrated successfully against Ebola virus and the pneumonia-causing respiratory syncytial virus, commonly known as RSV.

For the new project, Rogers and his UC San Diego colleagues took blood samples from patients who had recovered from mild-to-severe COVID-19. In parallel, scientists at Scripps Research and IAVI developed test cells that express ACE2, the receptor that SARS-CoV-2 uses to get into human cells. In a set of initial experiments, the team tested whether antibody-containing blood from the patients could bind to the virus and strongly block it from infecting the test cells.

The scientists were able to isolate more than 1,000 distinct antibody-producing immune cells, called B cells, each of which produced a distinct anti-SARS-CoV-2 antibody. The team obtained the antibody gene sequences from these B cells so that they could produce the antibodies in the laboratory. By screening these antibodies individually, the team identified several that, even in tiny quantities, could block the virus in test cells, and one that could also protect hamsters against heavy viral exposure.

All of this work—including the development of the cell and animal infection models, and studies to discover where the antibodies of interest bind the virus—was completed in less than seven weeks.

“We leveraged our institution's decades of expertise in antibody isolation and quickly pivoted our focus to SARS-CoV-2 to identify these highly potent antibodies,” says study co-author Elise Landais, PhD, an IAVI principal scientist.

If further safety tests in animals and clinical trials in people go well, then conceivably the antibodies could be used in clinical settings as early as next January, the researchers say.

“We intend to make them available to those who need them most, including people in low- and middle-income countries,” Landais says.

In the course of their attempts to isolate anti-SARS-CoV-2 antibodies from the COVID-19 patients, the researchers found one that can also neutralize SARS-CoV, the related coronavirus that caused the 2002-2004 outbreak of severe acute respiratory syndrome (SARS) in Asia.

“That discovery gives us hope that we will eventually find broadly neutralizing antibodies that provide at least partial protection against all or most SARS coronaviruses, which should be useful if another one jumps to humans,” Burton says.

“Rapid isolation of potent SARS-CoV-2 neutralizing antibodies and protection in a small animal model” was co-authored by 30 scientists including lead authors Thomas Rogers, Fangzhu Zhao, Deli Huang, and Nathan Beutler, all of Scripps Research. The corresponding authors were Devin Sok and Joseph Jardine of IAVI, and Dennis Burton of Scripps Research.

Email ThisBlogThis!Share to TwitterShare to FacebookShare to Pinterest
Labels: Healih