As of June 2020, NASA’s Solar Dynamics Observatory – SDO – has now been watching the Sun non-stop for over a full decade. From its orbit in space around Earth, SDO has gathered 425 million high-resolution images of the Sun, amassing 20 million gigabytes of data over the past 10 years. This information has enabled countless new discoveries about the workings of our closest star and how it influences the solar system.

With a triad of instruments, SDO captures an image of the Sun every 0.75 seconds. The Atmospheric Imaging Assembly (AIA) instrument alone captures images every 12 seconds at 10 different wavelengths of light. This 10-year time lapse showcases photos taken at a wavelength of 17.1 nanometers, which is an extreme ultraviolet wavelength that shows the Sun’s outermost atmospheric layer – the corona. Compiling one photo every hour, the movie condenses a decade of the Sun into 61 minutes. The video shows the rise and fall in activity that occurs as part of the Sun’s 11-year solar cycle and notable events, like transiting planets and eruptions. The custom music, titled “Solar Observer,” was composed by musician Lars Leonhard

This 10-year time lapse of the Sun at 17.1 nanometers (an extreme ultraviolet wavelength that shows the Sun’s outermost atmospheric layer – the corona) shows the rise and fall of the solar cycle and notable events, like transiting planets and solar eruptions.

While SDO has kept an unblinking eye pointed toward the Sun, there have been a few moments it missed. The dark frames in the video are caused by Earth or the Moon eclipsing SDO as they pass between the spacecraft and the Sun. A longer blackout in 2016 was caused by a temporary issue with the AIA instrument that was successfully resolved after a week. The images where the Sun is off-center were observed when SDO was calibrating its instruments.

In February 2020, NASA’s Solar Dynamics Observatory — SDO — is celebrating its 10th year in space. Over the past decade the spacecraft has kept a constant eye on the Sun, studying how the Sun creates solar activity and drives space weather — the dynamic conditions in space that impact the entire solar system, including Earth.

Since its launch on Feb. 11, 2010, SDO has collected millions of scientific images of our nearest star, giving scientists new insights into its workings. SDO’s measurements of the Sun — from the interior to the atmosphere, magnetic field, and energy output — have greatly contributed to our understanding of our closest star. SDO’s images have also become iconic — if you’ve ever seen a close up of activity on the Sun, it was likely from an SDO image.


SDO and other NASA missions will continue to watch our Sun in the years to come, providing further insights about our place in space and information to keep our astronauts and assets safe.

SDO has witnessed countless astounding flares — giant outbursts of plasma released from the solar surface — many of which have become iconic images of the ferocity our nearest star. In its first year and a half, SDO saw nearly 200 solar flares, which allowed scientists to spot a pattern. They noticed that around 15% of the flares had a “late phase flare” that would follow minutes to hours after the initial flare. By studying this special class, scientists gained a better understanding of just how much energy is produced when the Sun erupts.
2) Solar Tornadoes

In February 2012, SDO captured images showing strange plasma tornados on the solar surface. Later observations found these tornadoes, which were created by magnetic fields spinning the plasma, could rotate at speeds up to 186,000 miles per hour. On Earth tornadoes only reach speeds of 300 miles per hour.

The churring sea of plasma on the solar surface can create giant waves that travel around the Sun at up to 3 million miles per hour. Theses waves, named EIT waves after an instrument of the same name on the Solar and Heliophysics Observatory spacecraft that first discovered them, were imaged at high resolution by SDO in 2010. The observations showed for the first time how the waves move across the surface. Scientists suspect these waves are driven by coronal mass ejections, which spew clouds of plasma off the surface of the Sun into the solar system.
4) Combustible Comets

Over the years, SDO has watched two comets fly by the Sun. In December 2011, scientist watched as Comet Lovejoy managed to survive the intense heating as it passed 516,000 miles above the solar surface. Comet ISON in 2013 didn’t survive its encounter. Through observations such as these, SDO has provided scientists with new information about how the Sun interacts with comets.

Comet Lovejoy is seen here exiting from behind the right side of the sun, after an hour of travel through its closest approach to the sun. By tracking how the comet interacts with the sun's atmosphere, the corona, and how material from the tail moves along the sun's magnetic field lines, solar scientists hope to learn more about the corona. This movie was filmed by the Solar Dynamics Observatory (SDO) in 171 angstrom wavelength, which is typically shown in yellow.

Having no solid surface, the entire Sun is continually flowing due to the intense heat trying to escape and the rotation of the Sun. Moving about at the mid-latitudes are large-scale circulation patterns called Meridonial circulation. SDO’s observations revealed that these circulations are much more complex than scientists initially thought and are linked to sunspot production. These circulation patterns may even explain why at times one hemisphere might have more sunspots than another.
6) Predicting the Future

The Sun’s outpouring of material from coronal mass ejections, or CMEs, and the solar wind speed across the solar system. When they interact with Earth’s magnetic environment, they can induce space weather, which can be hazardous to spacecraft and astronauts. Using data from SDO, NASA scientists have worked on modeling the path of a CME as it moves across the solar system in order to predict its potential effect on Earth. The long baseline of solar observations has also helped scientists form additional machine-learning models to try to predict when the Sun might release a CME.

The Sun’s wispy superheated outer atmosphere — the corona — sometimes dims. Scientists studying coronal dimming have found that they are linked to CMEs, which are the main drivers of the severe space weather events that can damage satellites and harm astronauts. Using a statistical analysis of the large number of events seen with SDO, scientists were able to calculate the mass and velocity of Earth-directed CMEs — the most dangerous type. By linking coronal dimming to the size of CMEs, scientists hope to be able to study the space weather effects around other stars, which are too distant to directly measure their CMEs.

8) Death and Birth of a Solar Cycle

With a decade of observations, SDO has now seen nearly a complete 11-year solar cycle. Starting near the beginning of Solar Cycle 24, SDO watched as the Sun’s activity ramped up to solar maximum and then faded to the current ongoing solar minimum. These multiyear observations help scientists understand signs that signal the decline of one solar cycle and the onset of the next.
9) Polar Coronal Holes

At times the Sun’s surface is marked by large dark patches called coronal holes where extreme ultraviolet emission is low. Linked to the Sun’s magnetic field, the holes follow the solar cycle, increasing at the solar maximum. When they form at the top and the bottom on the Sun they’re called polar coronal holes and SDO scientists were able to use their disappearance to determine when the Sun’s magnetic field reversed — a key indicator of when the Sun reaches solar maximum.

This image from NASA’s Solar Dynamics Observatory on March 16, 2015, shows two dark spots, called coronal holes. The lower coronal hole, a polar coronal hole, was one of the biggest observed in decades. 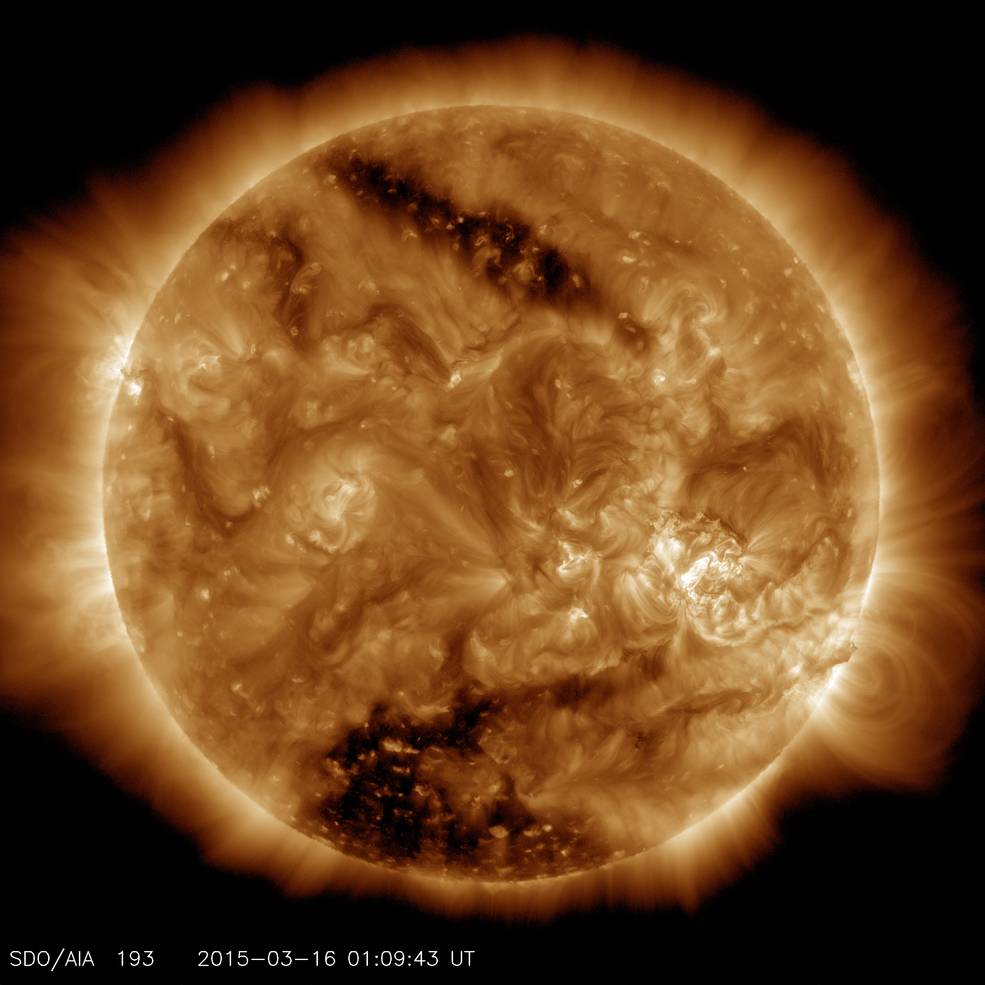 At the end of the decade in December 2019, SDO observations enabled scientists to discover a whole new type of magnetic explosion. This special type — called spontaneous magnetic reconnection (versus previously observed more general forms of magnetic reconnection) — helped confirm a decades-old theory. It also may help scientists understand why the solar atmosphere is so hot, better predict space weather, and lead to breakthroughs in controlled fusion and lab plasma experiments.

Forced magnetic reconnection, caused by a prominence from the Sun, was seen for the first time in images from NASA’s Solar Dynamics Observatory, or SDO. This image shows the Sun on May 3, 2012, with the inset showing a close-up of the reconnection event imaged by SDO’s Atmospheric Imaging Assembly instrument, where the signature X-shape is visible.


All instruments on SDO are still in good order, with the potential to stay functioning for another decade.

Capturing an image in 10 different wavelengths of light every 12 seconds, NASA’s Solar Dynamics Observatory — SDO — has provided an unprecedentedly clear picture of how massive explosions on the Sun grow and erupt ever since its launch on Feb. 11, 2010. The imagery is also captivating, allowing one to watch the constant ballet of solar material through the Sun's atmosphere, the corona. This year marks the 10th anniversary of SDO's launch and the start of its decade watching the Sun.

In its 10th year, SDO will be joined by a new joint ESA-NASA mission, Solar Orbiter. With an inclined orbit, Solar Orbiter will be able to see the polar regions for which SDO has limited coverage. Solar Orbiter also has complementary instruments that will allow the two missions to work together to create 3D images of structures below the visible surface of the Sun, giving scientists an even greater understanding of solar activity in the years to come.