In the past 150 years, global warming has more than undone the global cooling that occurred over the past six millennia, according to a major study published June 30 in Nature Research’s Scientific Data, “Holocene global mean surface temperature, a multi-method reconstruction approach.” The findings show the millennial-scale global cooling began approximately 6,500 years ago when the long-term average global temperature topped out at about 0.7 degrees C warmer than the mid-19th century. Since then, accelerating greenhouse gas emissions have contributed to global average temperatures that are now surpassing 1 degree C above the mid-19th century.

Four researchers of Northern Arizona University’s School of Earth and Sustainability (SES) led the study, with Regents’ Professor Darrell Kaufman as lead author and associate professor Nicholas McKay as co-author, along with assistant research professors Cody Routson and Michael Erb. The team worked in collaboration with scientists from research institutions throughout the world to reconstruct the global average temperature over the Holocene Epoch—the period following the Ice Age, beginning about 12,000 years ago.

“Before global warming, there was global cooling,” Kaufman said. “Previous work has shown convincingly that the world naturally and slowly cooled for at least 1,000 years prior to the middle of the 19th century, when the global average temperature reversed course along with the build-up of greenhouse gases. This study, based on a major new compilation of previously published paleoclimate data, combined with new statistical analyses, shows more confidently than ever that the millennial-scale global cooling began approximately 6,500 years ago.”

Earlier this year, an international group of 93 paleoclimate scientists from 23 countries—also led by Kaufman, McKay, Routson and Erb—published the most comprehensive set of paleoclimate data ever compiled for the past 12,000 years, compressing 1,319 data records based on samples taken from 679 sites globally. At each site, researchers analyzed ecological, geochemical and biophysical evidence from both marine and terrestrial archives, such as lake deposits, marine sediments, peat and glacier ice, to infer past temperature changes. Countless scientists working around the world over many decades conducted the basic research contributing to the global database.

“The rate of cooling that followed the peak warmth was subtle, only around 0.1°C per 1,000 years. This cooling seems to be driven by slow cycles in the Earth’s orbit, which reduced the amount of summer sunlight in the Northern Hemisphere, culminating in the ‘Little Ice Age’ of recent centuries,” said Erb, who analyzed the temperature reconstructions. 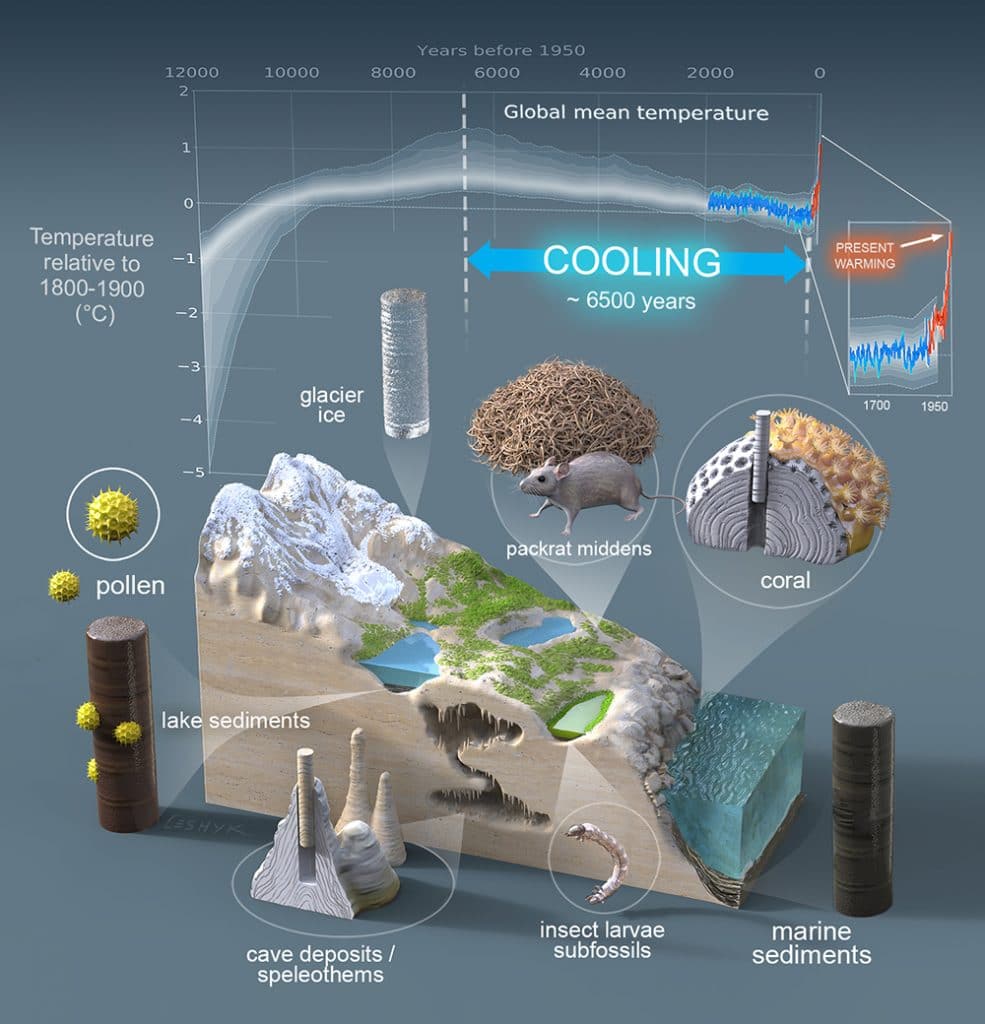 Since the mid-19th century, global warming has climbed to about 1°C, suggesting that the global average temperature of the last decade (2010-2019) was warmer than anytime during the present post-glacial period.

McKay, who developed some of the statistical approaches to synthesizing data from around the world, notes that individual decades are not resolved in the 12,000-year-long temperature reconstruction, making it difficult to compare it with any recent decade.

“On the other hand, this past decade was likely cooler than what the average temperatures will be for the rest of this century and beyond, which are very likely to continue to exceed 1°C above pre-industrial temperatures,” McKay said.

“It’s possible that the last time the sustained average global temperature was 1°C above the 19th century was prior to the last Ice Age, back around 125,000 years ago when sea level was around 20 feet higher than today,” Kaufman said.

Read more about an earlier version of the database to link Arctic warming to a reduction in precipitation at mid latitudes.

“Investigating the patterns of natural temperature changes over space and time helps us understand and quantify the processes that cause climate to change, which is important as we prepare for the full range of future climate changes due to both human and natural causes,” Routson said. “Our future climate will largely depend on the influence of human factors, especially the build-up of greenhouse gases. However, future climate will also be influenced by natural factors, and it will be complicated by the natural variability within the climate system. Future projections of climate change will be improved by better accounting for both anthropogenic and natural factors.”

The reconstruction of past global temperature is the outgrowth of several NAU research projects aimed at understanding the causes and effects of natural climate variability, work that was funded through more than $1.2 million in grants from the National Science Foundation. The team was recently awarded another $678,000 in grants from the NSF for related work extending through 2023.