New Group Testing for COVID-19 Could Get 90% of the U.S. Back to Daily Life

A new method of group testing – in which samples of COVID-19 tests are pooled and analyzed collectively – could potentially curtail the virus’s spread through weekly testing of every household in the U.S.

Assuming that 1% of Americans have the virus, a new simulation led by Cornell University researcher Peter Frazier found that weekly group testing could allow more than 90% of the country to safely return to daily life after a four-week period.

The method, described in a recent white paper, ““Feasibility of COVID-19 Screening for the U.S. Population With Group Testing,” would require 6 million tests per week, which is far more than are currently conducted but is a feasible goal, Frazier said.

Illustration of a 30x30 group test. Each circle represents a combined sample from a household. A household is deemed positive if both its pools (row and column) test positive. A circle is solid red if a member of the household is infected; orange circles indicate false positives. 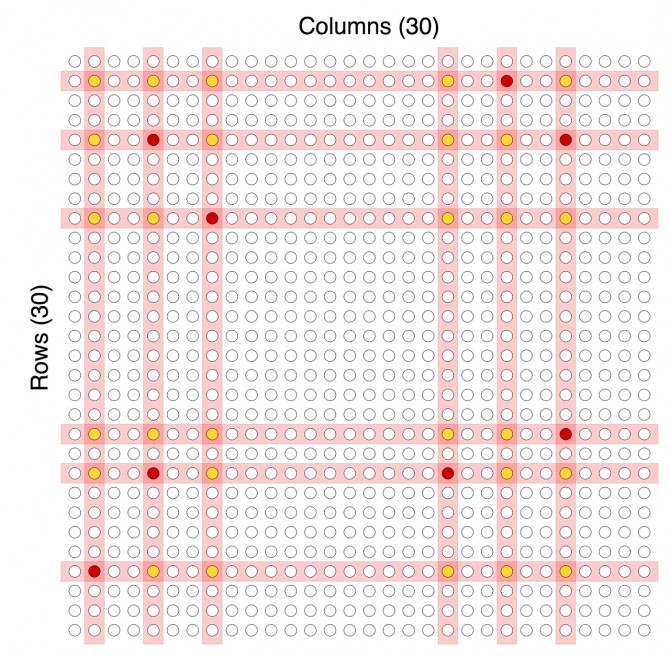 “If we had the ability to provide tests to a large fraction of the population on a regular basis, that would allow us to find people who are infectious but don’t know it, and then take action so that those people don’t infect other people,” he said. “And one of our big challenges is we don’t have the testing capacity to meet that need.”

One of the major limiting factors in testing is the polymerase chain reaction (PCR) test, a time-consuming laboratory technique requiring specialized machinery. With group testing, dozens of individual saliva or nasal samples are pooled and tested together.

To identify positive cases, the samples are arranged in a square, with pools constructed from each row and column. If the pool is negative, everyone in it can be considered uninfected; positive cases can be narrowed down by pinpointing where positive rows and columns intersect.

In the researchers’ simulation, they presumed that households would be tested once a week for four weeks. The household tests were pooled in sized ranging from 41 samples to 62 samples. Assuming a 30% false negative rate from improper swabbing and a 10% false positive rate, the simulation found that by the end of four weeks the virus prevalence would drop from 1% to 0.3% of the population.

“There’s a tradeoff – if you don’t have enough capacity to be able to test everyone with individual tests, then you can either test fewer people at less frequency with more accuracy, or you can sacrifice a little in terms of accuracy to test a large number of people at a greater frequency,” Frazier said.