New research findings underline the crucial role that sea ice throughout the Southern Ocean played for atmospheric CO2 in times of rapid climate change in the past. An international team of scientists with the participation of the University of Bonn has shown that the seasonal growth and destruction of sea ice in a warming world increases the biological productivity of the seas around Antarctica by extracting carbon from the atmosphere and storing it in the deep ocean. This process helps to explain a long-standing question about an apparent 1,900-year pause in CO2 growth during a period known as the Antarctic cold reversal. The research results have now been published in "Nature Geoscience".

The diagram shows the Patriot Hills (left) and the blue ice field of the Horseshoe Valley (right), where older ice is pushed to the surface.

Surrounding the remote continent of Antarctica, the Southern Ocean is one of the most important yet poorly understood components of the global carbon cycle. Having captured half of all human-related carbon that has entered the ocean to date, the Southern Ocean is crucial to regulating human-induced CO2. Therefore, understanding the processes that determine its effectiveness as a carbon sink through time are essential to reducing uncertainty in climate projections.

After the Last Ice Age, around 18,000 years ago, the world transitioned naturally into the warm interglacial world we live in today. During this period, CO2 rose rapidly from around 190 ppm to 280 ppm over around 7,000 years. This rise was not steady, and was interrupted by rapid rises and intermittent plateaus, reflecting different processes within the global carbon cycle.

One period stands out: a 1,900-year plateau of near-constant CO2 levels at 240 ppm starting some 14,600 years ago called the Antarctic Cold Reversal. The cause of this plateau remains unknown, but understanding the processes may be critical for improving projections surrounding climate-carbon feedbacks.

"We found that in sediment cores located in the sea-ice zone of the Southern Ocean biological productivity increased during this critical period, whereas it decreased farther north, outside of the sea-ice zone", says Michael Weber, co-author of the study from the Institute for Geosciences at the University of Bonn. "It was now important to find out how climate records on the Antarctic continent depict this critical time period."

Drilling camp in the Horseshoe Valley with flat drill in the foreground. 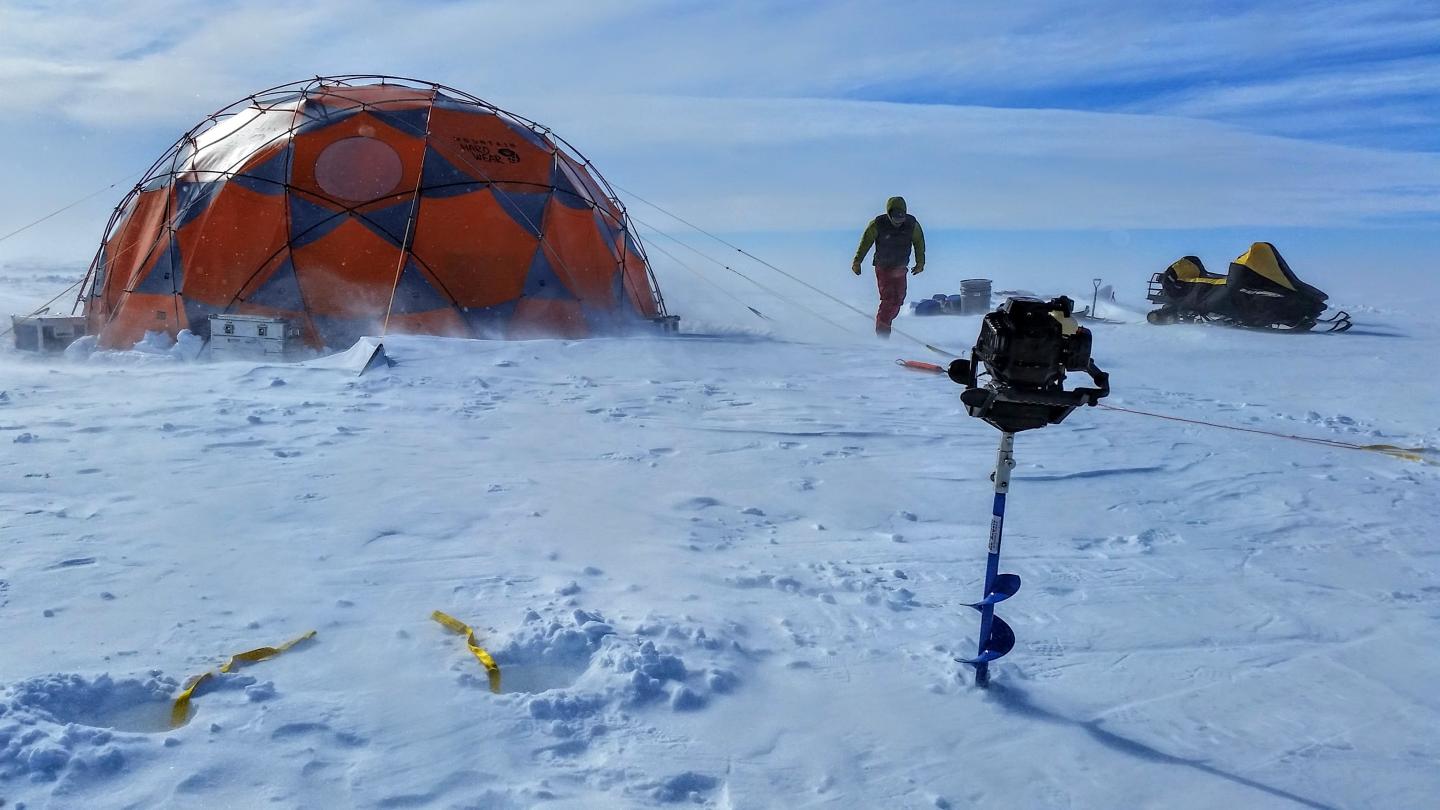 
To resolve this question researchers from Keele University, U.K., and the University of New South Wales (UNSW) in Sydney, Australia, travelled to the Patriot Hills Blue Ice Area to obtain new records of marine biomarkers captured in ice cores. Chris Fogwill, lead author of the study from Keele University, says "the cause of this long plateau in global atmospheric CO2 levels may be fundamental to understanding the potential of the Southern Ocean to moderate atmospheric CO2. Whilst recent reductions in emissions due to the Covid-19 pandemic have shown that we can reduce CO2, we need to understand the ways in which CO2 levels have been stabilised by natural processes, as they may be key to the responsible development of geoengineering approaches and remain fundamental to achieving our commitment to the Paris Agreement".

Blue ice areas are created by fierce, high-density katabatic winds that erode the top layer of snow effectively and expose the ice below. As a result, ice flows up to the surface, providing access to ancient ice below. While most Antarctic researchers drill down into the ice to extract samples with a conventional ice core, this team used a different method: horizontal ice core analysis. Chris Turney (UNSW, Sydney) says "Instead of drilling kilometres into the ice, we can simply walk across a blue ice area to travel back through time. This provides the opportunity to sample large volumes of ice necessary for studying new organic biomarkers and DNA that were blown from the Southern Ocean onto Antarctica and preserved in the blue ice."

Surface of the blue ice field in Horseshoe Valley exposed by wind erosion. The erected layers show younger ice on the right and older ice on the left. 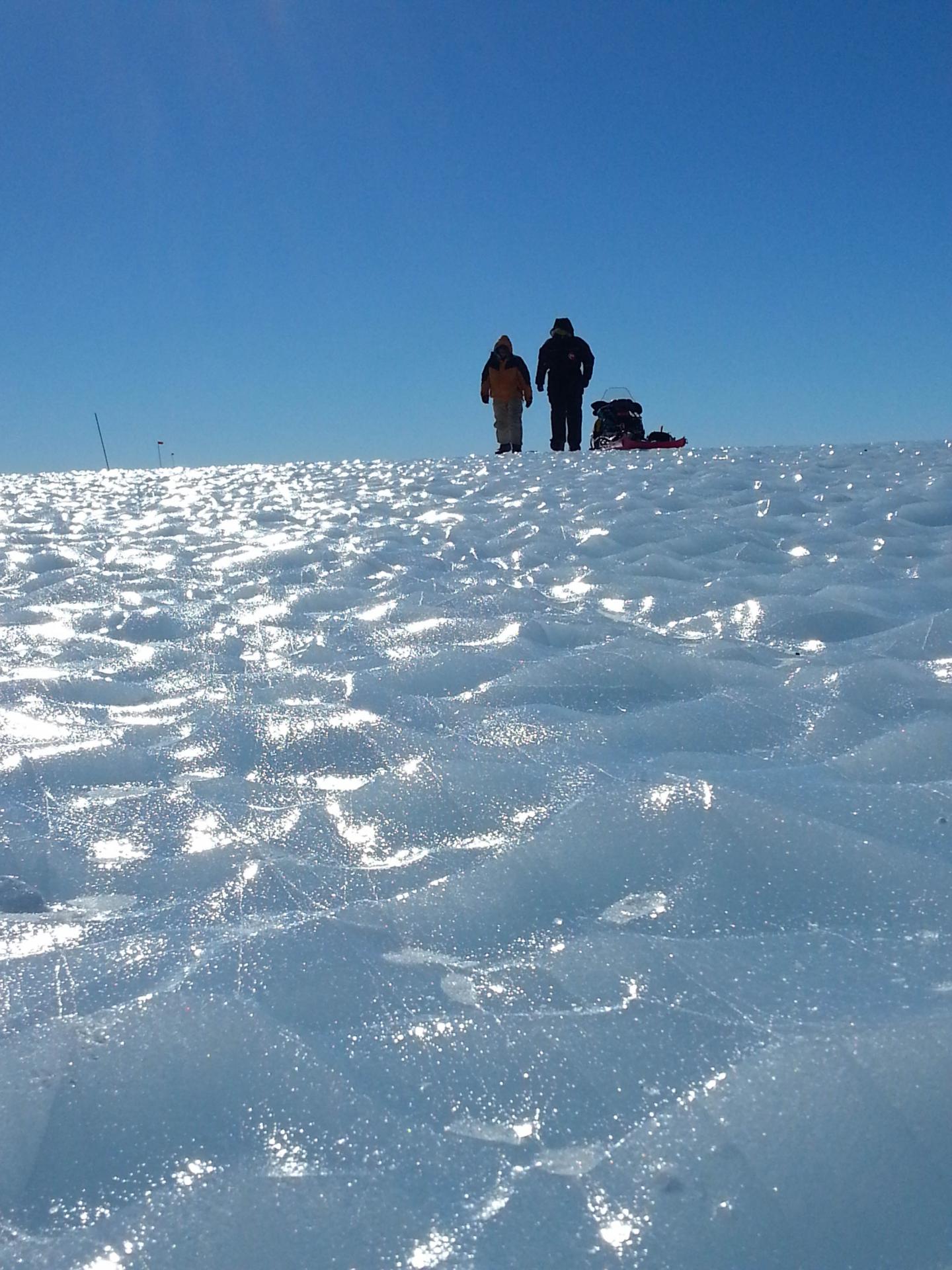 The results demonstrated a marked increase in the number and diversity of marine organisms across the 1,900 year period of the CO2 plateau, an observation never seen before. The team also conducted climate modelling revealing that this period coincided with the greatest seasonal changes in sea ice extent from summer to winter. Together with the marine cores, these findings provide the first evidence of increased biological productivity record and suggest that processes in the Antarctic Zone of Southern Ocean may have caused the CO2 plateau.

The team will use this work to underpin the development of climate models that seek to improve our understanding of future climate change. The inclusion of sea ice processes that control climate-carbon feedbacks in a new generation of models will be crucial for reducing uncertainties surrounding climate projections and help society adapt to future warming.