As nuclear fusion engines, most stars live placid lives for hundreds of millions to billions of years. But near the end of their lives they can turn into crazy whirligigs, puffing off shells and jets of hot gas. Astronomers have employed Hubble's full range of imaging capabilities to dissect such crazy fireworks happening in two nearby young planetary nebulas. NGC 6303 is dubbed the Butterfly Nebula because of its wing-like appearance. In addition, NGC 7027 resembles a jewel bug, an insect with a brilliantly colorful metallic shell.

The researchers have found unprecedented levels of complexity and rapid changes in jets and gas bubbles blasting off of the stars at the centers of both nebulas. Hubble is allowing the researchers to converge on an understanding of the mechanisms underlying the chaos.

"When I looked in the Hubble archive and realized no one had observed these nebulas with Hubble's Wide Field Camera 3 across its full wavelength range, I was floored," said Joel Kastner of Rochester Institute of Technology, Rochester, New York, leader of the new study. "These new multi-wavelength Hubble observations provide the most comprehensive view to date of both of these spectacular nebulas. As I was downloading the resulting images, I felt like a kid in a candy store."

By examining this pair of nebulas with Hubble's full, panchromatic capabilities — making observations in near-ultraviolet to near-infrared light — the team has had several "aha" moments. In particular, the new Hubble images reveal in vivid detail how both nebulas are splitting themselves apart on extremely short timescales — allowing astronomers to see changes over the past couple decades. Some of this rapid change may be indirect evidence of one star merging with its companion star.

"The nebula NGC 7027 shows emission at an incredibly large number of different wavelengths, each of which highlights not only a specific chemical element in the nebula, but also the significant, ongoing changes in its structure," said Kastner. The research team also observed the Butterfly Nebula, which is a counterpart to the "jewel bug" nebula: Both are among the dustiest planetary nebulas known and both also contain unusually large masses of gas because they are so newly formed. This makes them a very interesting pair to study in parallel, say researchers.

Hubble's broad multi-wavelength views of each nebula are helping the researchers to trace the nebulas' histories of shock waves. Such shocks typically are generated when fresh, fast stellar winds slam into and sweep up more slowly expanding gas and dust ejected by the star in its recent past, generating bubble-like cavities with well-defined walls.

Researchers suspect that at the hearts of both nebulas are — or were — two stars circling around each other, like a pair of figure skaters. Evidence for such a central "dynamic duo" comes from the bizarre shapes of these nebulas. Each has a pinched, dusty waist and polar lobes or outflows, as well as other, more complex symmetrical patterns.

A leading theory for the generation of such structures in planetary nebulas is that the mass-losing star is one of two stars in a binary system. The two stars orbit one another closely enough that they eventually interact, producing a gas disk around one or both stars. The disk is the source of outflowing material directed in opposite directions from the central star.

Similarly, the smaller star of the pair may merge with its bloated, more rapidly evolving stellar companion. This also can create outflowing jets of material that may wobble over time. This creates a symmetric pattern, perhaps like the one that gives NGC 6302 its "butterfly" nickname. Such outflows are commonly seen in planetary nebulas.

"The suspected companion stars in NGC 6302 and NGC 7027 haven't been directly detected because they are next to, or perhaps have already been swallowed by, larger red giant stars, a type of star that is hundreds to thousands of times brighter than the Sun," said team member Bruce Balick of the University of Washington in Seattle. "The hypothesis of merging stars seems the best and simplest explanation for the features seen in the most active and symmetric planetary nebulas. It's a powerful unifying concept, so far without rival."
The Butterfly Nebula

Imagine a lawn sprinkler spinning wildly, tossing out two S-shaped streams. At first it appears chaotic, but if you stare for a while, you can trace its patterns. The same S-shape is present in the Butterfly Nebula, except in this case it is not water in the air, but gas blown out at high speed by a star. And the "S" only appears when captured by the Hubble camera filter that records near-infrared emission from singly ionized iron atoms.

"The S-shape in the iron emission from the Butterfly Nebula is a real eye-opener," Kastner said. The S-shape directly traces the most recent ejections from the central region, since the collisions within the nebula are particularly violent in these specific regions of NGC 6302. "This iron emission is a sensitive tracer of energetic collisions between slower winds and fast winds from the stars," Balick explained. "It's commonly observed in supernova remnants and active galactic nuclei, and outflowing jets from newborn stars, but is very rarely seen in planetary nebulas."

"The fact that the iron emission is only showing up along these opposing, off-center directions implies that the source of the fast flows is wobbling over time, like a spinning top that's about to fall," added Kastner. "That's another tell-tale sign of the presence of a disk, which directs the flow, and also a binary companion."

Hubble was recently retrained on NGC 6302, known as the "Butterfly Nebula," to observe it across a more complete spectrum of light, from near-ultraviolet to near-infrared, helping researchers better understand the mechanics at work in its technicolor "wings" of gas. The observations highlight a new pattern of near-infrared emission from singly ionized iron, which traces an S-shape from lower left to upper right. This iron emission likely traces the central star system’s most recent ejections of gas, which are moving at much faster speeds than the previously expelled mass. The star or stars at its center are responsible for the nebula's appearance. In their death throes, they have cast off layers of gas periodically over the past couple thousand years. The "wings" of NGC 6302 are regions of gas heated to more than 36,000 degrees Fahrenheit that are tearing across space at more than 600,000 miles an hour. NGC 6302 lies between 2,500 and 3,800 light-years away in the constellation Scorpius. 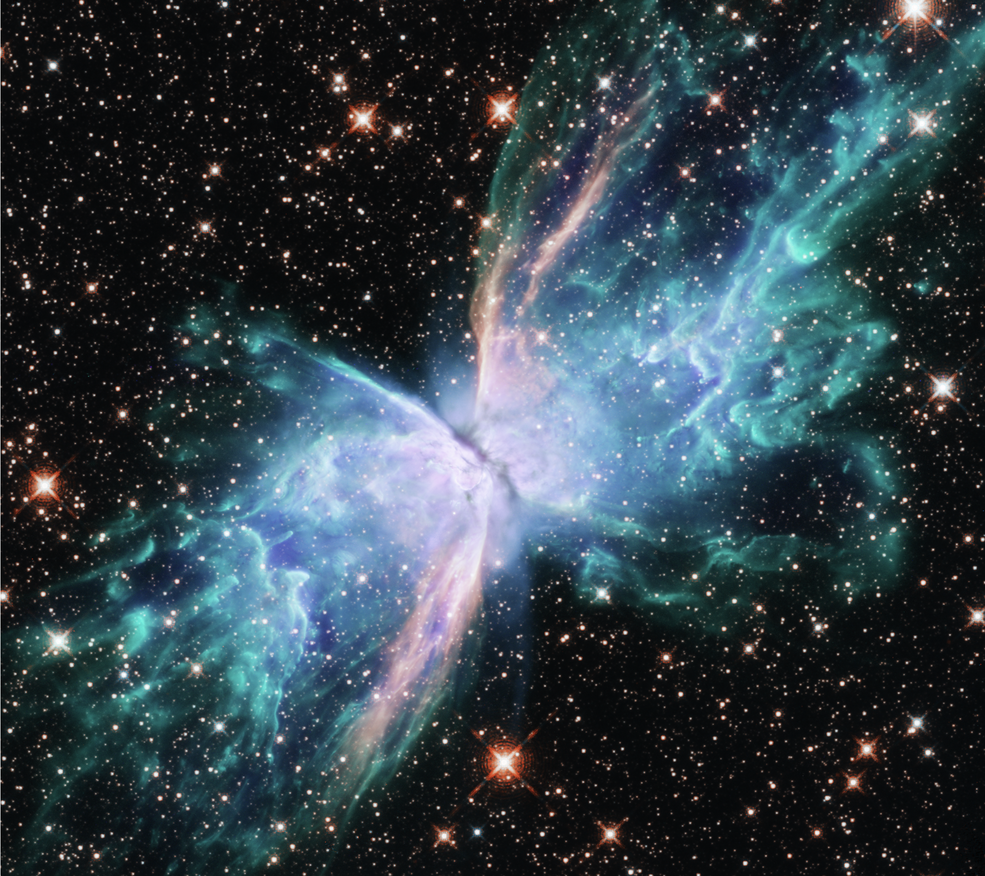 The planetary nebula NGC 7027 had been slowly puffing away its mass in quiet, spherically symmetric or perhaps spiral patterns for centuries — until relatively recently. "In some respects, the changes within this nebula are even more dramatic than those within the Butterfly," Kastner said. "Something recently went haywire at the very center, producing a new cloverleaf pattern, with bullets of material shooting out in specific directions."

The research team's new images of NGC 7027 show emission from singly ionized iron that closely resembles observations made by NASA's Chandra X-ray Observatory in 2000 and 2014 as part of earlier research by Kastner, team member Rodolfo Montez Jr. of the Center for Astrophysics | Harvard & Smithsonian, and collaborators. The iron emission traces the southeast-to-northwest-oriented outflows that also produce the X-ray-emitting shocks imaged by Chandra. "We have a sneaking suspicion that this nebula is a great example of what happens when a red giant star abruptly swallows a companion," Montez Jr. said.

Recently, NGC 7027's central star was identified in a new wavelength of light — near-ultraviolet — for the first time by using Hubble's unique capabilities. The near-ultraviolet observations will help reveal how much dust obscures the star and how hot the star really is. This object, which resembles a colorful jewel bug, is a visibly diffuse region of gas and dust that may be the result of ejections by closely orbiting binary stars that were first slowly sloughing off material over thousands of years, and then entered a phase of more violent and highly directed mass ejections. Hubble first looked at this planetary nebula in 1998. By comparing the old and new Hubble observations, researchers now have additional opportunities to study the object as it changes over time. Planetary nebulas are expanding shells of gas created by dying stars that are shedding their outer layers. When new ejections encounter older ejections, the resulting energetic collisions shape the nebula. The mechanisms underlying such sequences of stellar mass expulsion are far from fully understood, but researchers theorize that binary companions to the central, dying stars play essential roles in shaping them. NGC 7027 is approximately 3,000 light-years away in the constellation Cygnus. 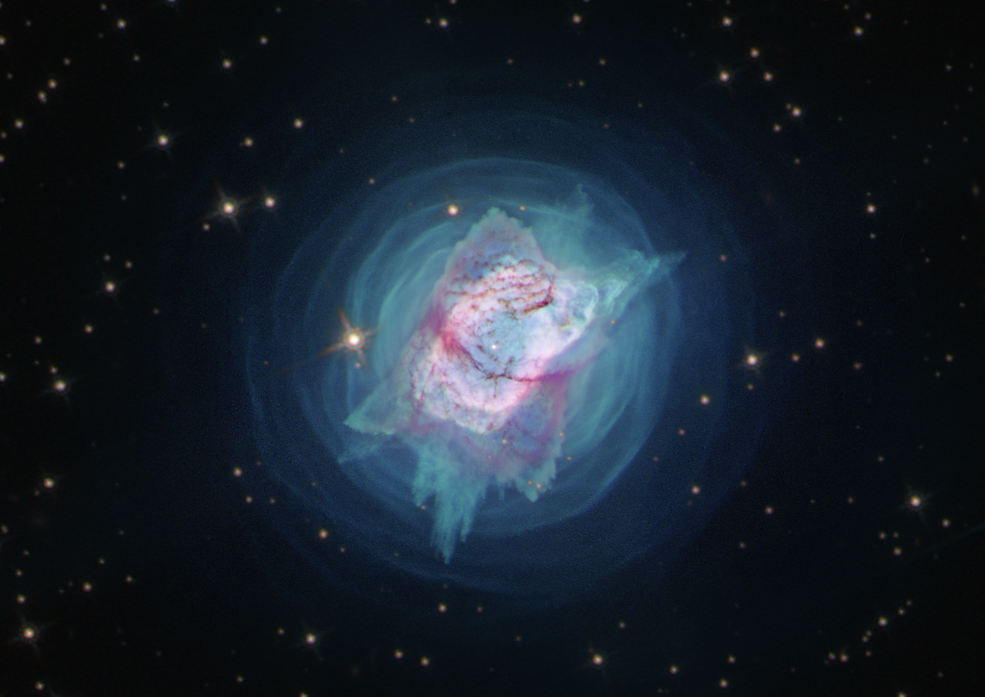 
The research team also includes Ph.D. students Jesse Bublitz and Paula Moraga of Rochester Institute of Technology, and Adam Frank and Eric Blackman of the University of Rochester.

The team's paper, "First Results from a Panchromatic HST/WFC3 Imaging Study of the Young, Rapidly Evolving Planetary Nebulae NGC 7027 and NGC 6302" was published on June 15, 2020, in the journal Galaxies.

The Hubble Space Telescope is a project of international cooperation between NASA and ESA (European Space Agency). NASA's Goddard Space Flight Center in Greenbelt, Maryland, manages the telescope. The Space Telescope Science Institute (STScI) in Baltimore conducts Hubble science operations. STScI is operated for NASA by the Association of Universities for Research in Astronomy in Washington, D.C.