A small bird carving--the oldest instance of East Asian three-dimensional art ever discovered--is described in a study published June 10, 2020 in the open-access journal PLOS ONE by Zhanyang Li from Shandong University, China, and colleagues.

European animal and human mammoth ivory carvings dated to 40-38 ka are our earliest examples of prehistoric humans three-dimensionally representing the world around them--though due to a lack of evidence, it's unclear when this type of three-dimensional representation became part of the cultural repertoire of prehistoric groups around the rest of the world. In this study, Li and colleagues describe the remarkable discovery of a small standing bird carving from the Paleolithic site of Lingjing, in Henan, China, that sheds further light on humanity's earliest three-dimensional art.

Photograph and 3D μ-CT reconstitution of the miniature bird figurine discovered at Lingjing (Henan Province, China), dated to 13 500 years ago. 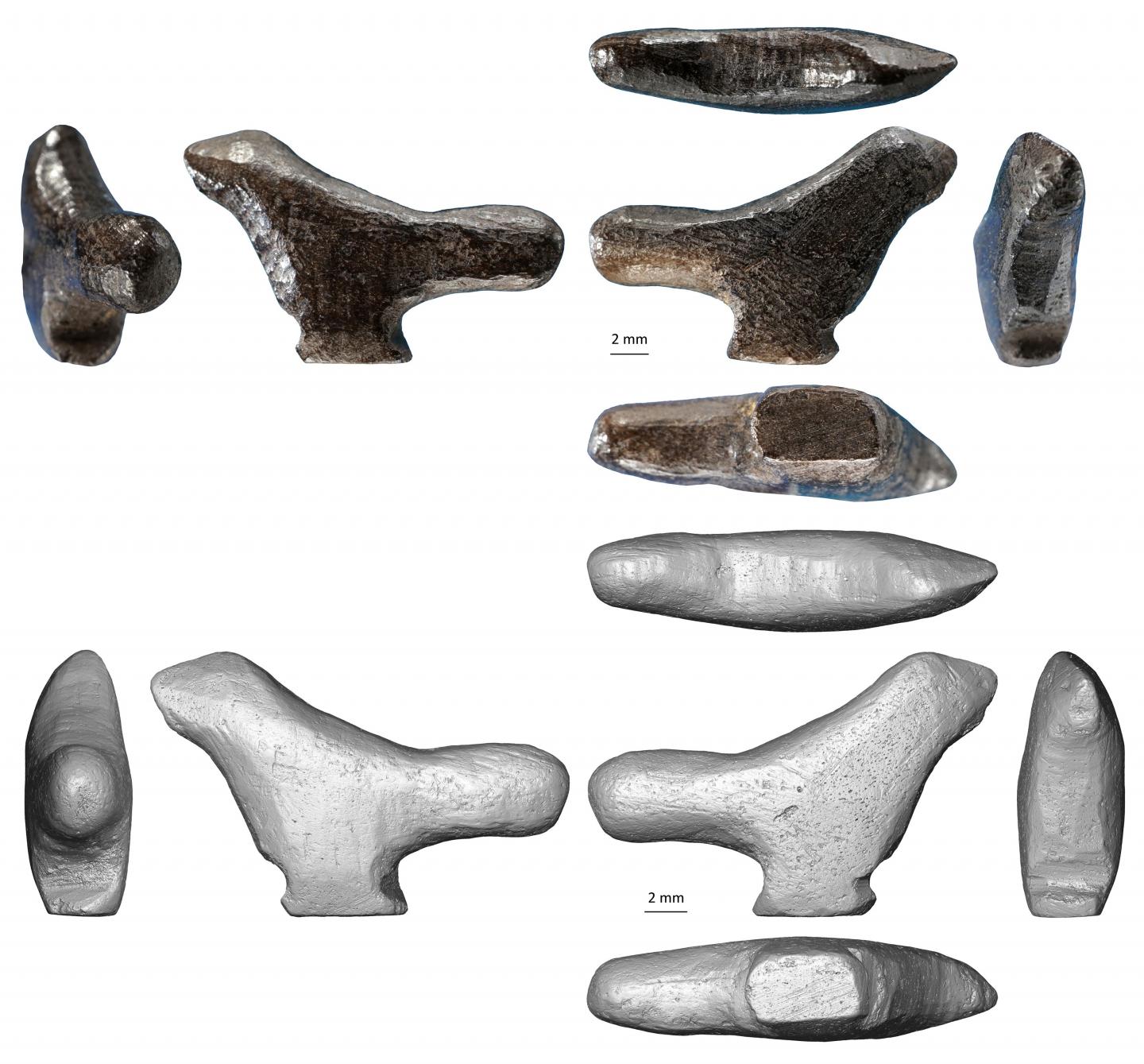 During Li's initial excavation at Lingjing in 2005, he uncovered eleven distinct stratified layers ranging in age from 120,000 years ago to the Bronze Age --and found that most of the fifth layer had been removed during a well-digging operation in 1958. However, the refuse heap from the well's creation was still intact and remained nearby. After sifting through the sediment in the refuse heap, the authors discovered black flint identical to (and only found in) what remained of Layer 5 at the dig site. They also uncovered several artifacts, including pottery sherds, burned animal remains, and the bird figurine, which is carved from bone and shaped like a songbird on a pedestal.

Using radiocarbon dating on the uncovered burned animal remains (including one bone with anthropogenic gouging marks also observed on the bird carving), the authors were able to estimate the age of the bird figurine and associated bone material to be approximately 13.4-13.2 ka cal BP. Based on evidence from other Northern Chinese sites of similar age, this suggests that hunter-gatherers with stone tool technologies occupied Lingjing and created the bird carving during this time.

Bird representations are a theme in Chinese Neolithic art, with the oldest example a jade songbird dated to approximately 5 ka BP. This Paleolithic bone bird figurine from Lingjing predates previously known instances from this region by almost 8,500 years, and has several technological and stylistic elements distinguishing it from contemporaneous representations of birdlike creatures from Western Europe and Siberia (such as the pedestal on which the Lingjing bird is perched). Though more examples of Paleolithic carving art are needed to confirm this possibility, the Lingjing bird figurine suggests the presence of a longstanding artistic tradition specific to East Asia, with origins much earlier in the Paleolithic.

The authors add: "This discovery identifies an original artistic tradition and pushes back by more than 8,500 years the representation of birds in Chinese art. The figurine differs technologically and stylistically from other specimens found in Western Europe and Siberia, and it could be the missing link tracing the origin of Chinese statuary back to the Palaeolithic period."