What kind of interactions did the various Stone Age cultures have with one another? In a new interdisciplinary study, researchers have combined archaeological and genetic information to better understand Battle Axe cultural influences discovered in graves of the Pitted Ware culture. The findings are published in the American Journal of Physical Anthropology.

Archaeological remains have shown that in the middle part the Stone Age, there were at least three different but partially contemporary cultural groups in Sweden. The groups are often called: Funnel Beaker culture, which is associated with Scandinavia's first farmers; Pitted Ware culture, which is mainly linked to fishing and hunting; and Battle Axe culture, which represents a blended culture of herding and farming.


The man in grave 54 from the Ajvide Pitted Ware burial ground on Gotland is buried flat on his back, which is typical of Pitted Ware graves. 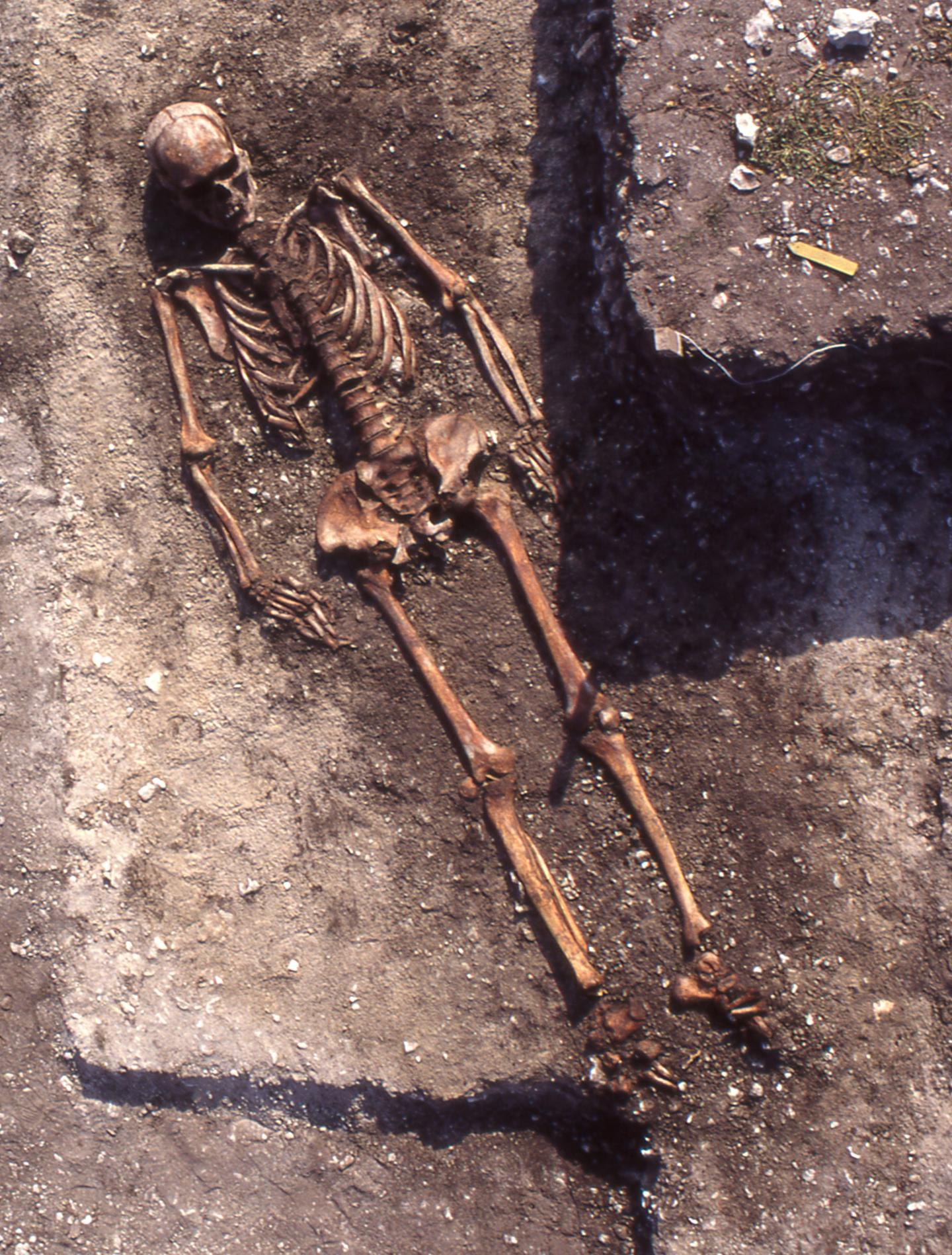 
In addition to sustaining themselves in different ways, the three groups had different burial rituals and different kinds of objects. The research team behind the new study has previously been able to show that people in the three cultural groups also differed genetically.

The genetic mapping the researchers did at that time was invaluable as they investigated why some Pitted Ware graves seemed to be influenced by the Battle Axe culture, even though the two cultures lived relatively differently during their centuries of co-existence.

Gotland has several large, well-preserved cemeteries with typical Pitted Ware culture graves. The dead were usually buried lying on their backs and with gifts, such as hunting tools and bones from seals, among other things. Neither large stone blocks nor mounds were placed on the graves.

"In addition to the typical Pitted Ware graves, there were also several atypical graves with apparent influences from Battle Axe culture. For example, some individuals were buried lying on their sides with their legs pulled up, and some had battle axes as burial gifts, which is usually associated with Battle Axe culture," says Professor Jan Storå, archaeologist at Stockholm University and one of the authors of the study.

The woman in grave 36 from the Ajvide Pitted Ware burial ground on Gotland is lying in a different burial position, which was influenced by Battle Axe culture. 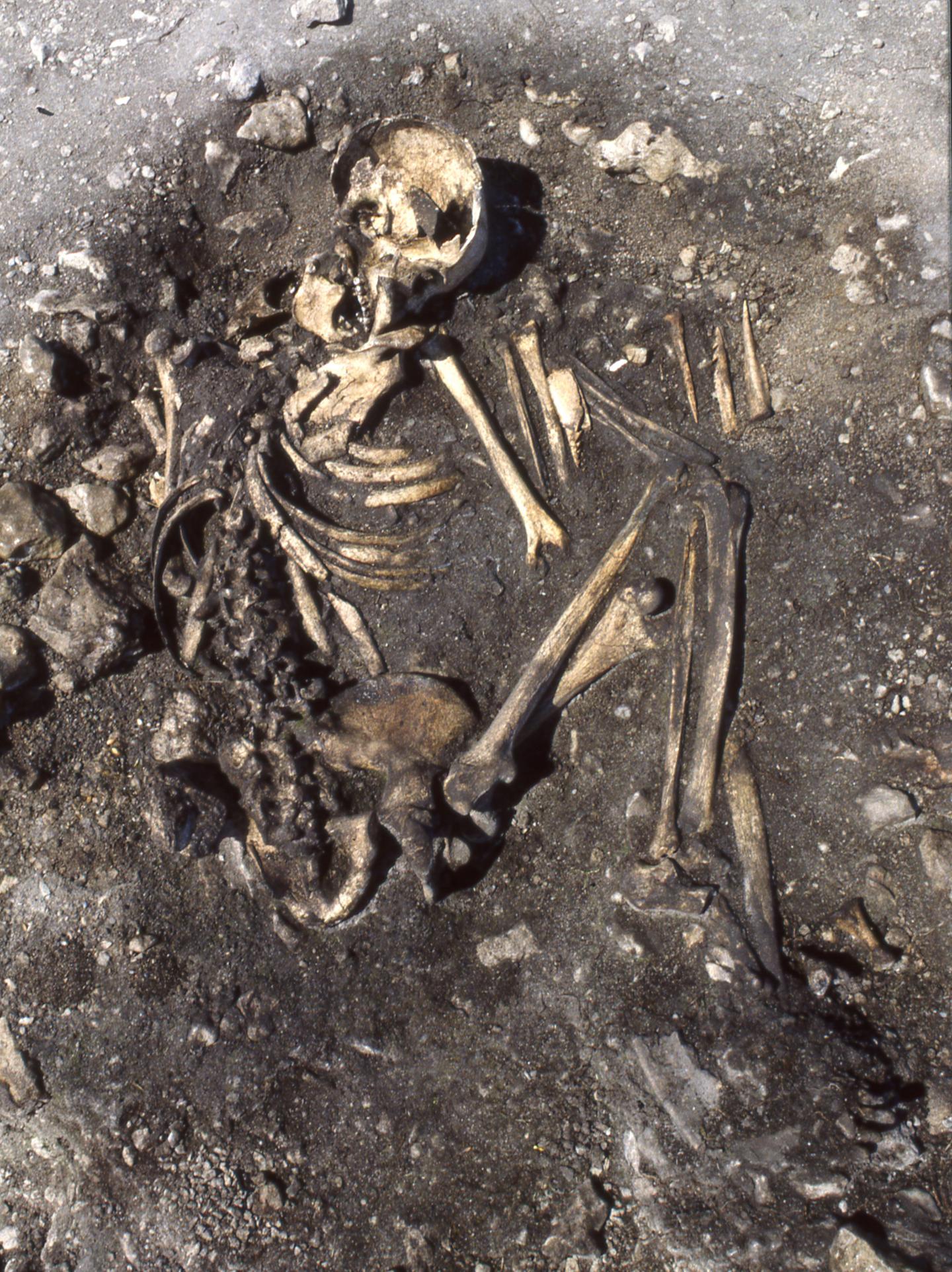 To their surprise, the researchers found that none of the individuals were genetically related to people from Battle Axe culture. On the contrary, everyone appeared to belong to a very homogeneous group that demonstrated the most genetic similarity to the hunter-gatherer groups of earlier periods.

"This is a unique study that contributes to our understanding of the interactions between the cultural groups of the Stone Age. We can conclude that people in Pitted Ware culture were influenced by, among others, Battle Axe culture, but because we found no genetic connection between the groups, contact was likely in the form of trade and other means, rather than through migration," says Helena Malmström, archaeogeneticist at Uppsala University and one of the authors of the study.

The study is a part of the interdisciplinary Atlas Project, where researchers are studying prehistoric population patterns in Scandinavia and Eurasia through genetic data from prehistoric individuals.

Funnel Beaker culture: Scandinavia's first farming culture, which sustained itself with farming and livestock. Existed between 4,800 and 6,000 years ago. Found in southern and central Sweden and in northern parts of continental Europe. Had characteristic ceramics with funnel-shaped necks. Used so-called megalithic graves, stone monuments in which a large number of people were buried. Megalithic graves were most common in Scania, along the west coast and in Falbygden in Västergötland. People buried in Funnel Beaker graves were most genetically similar to early farmers from Anatolia and continental Europe. They differ genetically from earlier Stone Age hunter-gatherers.

Battle Axe culture: Named after their characteristic axes. Came after Funnel Beaker culture and were contemporaries of the later phase of Pitted Ware culture. Often described as a blended herding and farming culture. Existed between 4,300 and 4,800 years ago. Found primarily in southern and central Sweden. Linked to continental European Corded Ware culture. Primarily had single or double graves in which the dead were placed lying on their sides, with their legs pulled up. People found in Battle Axe culture graves show a new genetic component that is not present in the people of the Funnel Beaker or Pitted Ware cultures. This makes them a new group of migrating people in the area with connections to Eastern Steppe herders.

Pitted Ware culture: Named after the characteristic pitted ornamentation of their ceramics. Existed between 4,400 and 5,400 years ago. Partially contemporaries first with Funnel Beaker culture and then with Battle Axe culture. Mainly lived in coastal areas and on Gotland, Öland and Åland. Lived on fishing and hunting, including seal. Often buried their dead lying on their backs in single or double graves. People buried in Pitted Ware culture graves were genetically similar to earlier Scandinavian hunter-gatherers.