Discovery Of Oldest Bow And Arrow Technology In Eurasia

Traditionally, archaeology presumed human innovations in grasslands, on the coasts of Africa or in the temperate climatic zones of Europe. More extreme environments, such as the tropical rainforest in Asia, have largely been disregarded, despite their long history of human settlement. A new study now provides the oldest evidence of the use of bows and arrows, and possibly the manufacture of clothing, outside of Africa around 48-45,000 years ago in the tropics of Sri Lanka. 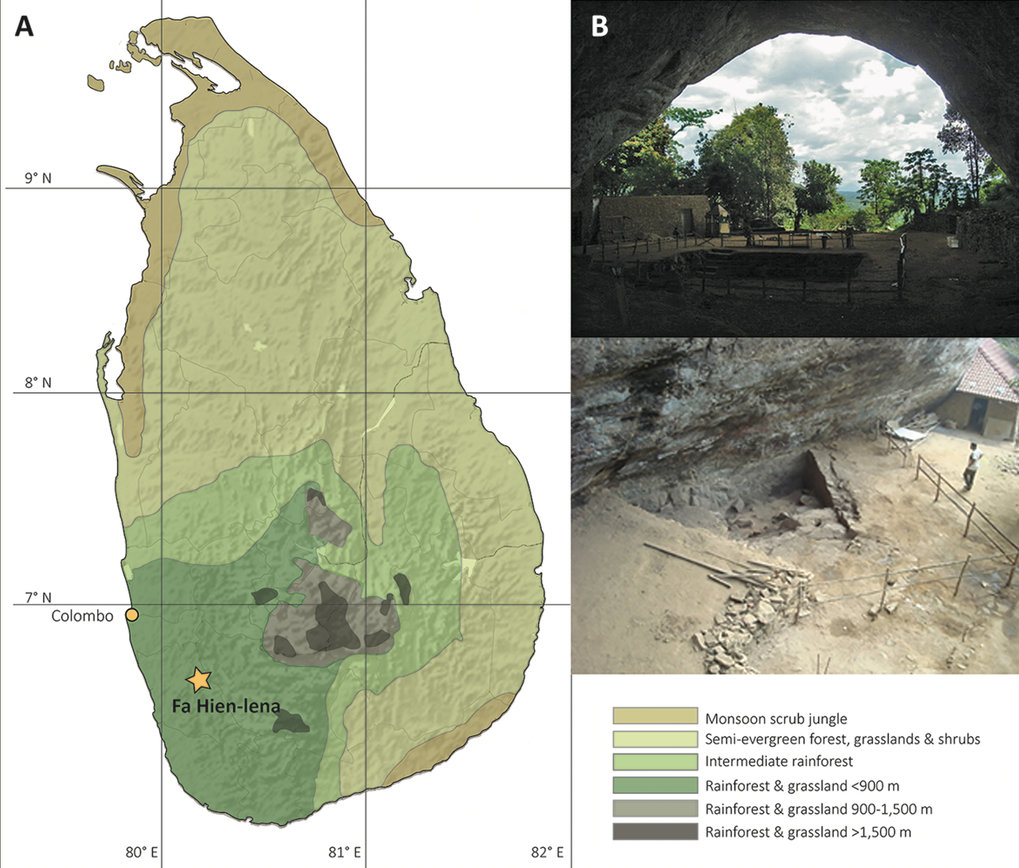 Sri Lanka is located south of the Indian subcontinent. The island in the Indian Ocean is home to the oldest fossils of our species, Homo Sapiens, in South Asia. There are also clear indications of human settlement and use of tropical rainforest areas outside Africa from around 48,000 to around 3,000 years ago on the island. This contradicts the assumption that these supposedly low-resource environments were only barriers to the spread of humans in the Pleistocene. However, the question of how exactly humans managed to use the resources of the rainforest - including “agile food sources” such as monkeys and squirrels - has not yet been answered.

In the current study, published in Science Advances, an international research team from the Jena Max Planck Institute for Human History (MPI-SHH), Griffith University in Australia and the Archaeology Department of the Sri Lankan government presents evidence of the earliest use of bows and arrows outside of Africa. At 48,000 years old, these weapons are older than similar finds in Europe. Traces on the preserved arrowheads made of bone show that they were probably used to hunt prey that is difficult to catch. The team also succeeded in showing that other bone tools were used to make nets and clothing in this tropical forest environment. This fundamentally revises traditional assumptions about how human innovations are linked to specific environmental conditions.

Hunting in open grasslands and protection from the cold?

Cultural evidence from Europe such as cave paintings, amazingly detailed bone carvings, bone tools and tailored clothing have long been considered the culmination of cultural development in the late Pleistocene. Symbolic and technological innovations were considered important mechanisms that enabled the growing population to settle and survive in the northern climates. In the meantime, discoveries of older bow and arrow technologies and artistic or symbolic behavior in open grasslands and in the coastal regions of Africa have led to the fact that "savannas" and marine environments are seen as the main drivers of early hunting and cultural experiments by people in the Pleistocene.

Co-author Patrick Roberts from the Max Planck Institute for Human History explains: “The traditional focus has led to other regions of Africa, Asia, Australasia and America in debates about the origin of material cultures, such as the development of bullets and thus new hunting methods or cultural innovations have been neglected. ”Nonetheless, the past twenty years have shown how the Pleistocene people populated and adapted to a variety of extreme environments, including deserts, mountainous regions, and tropical rainforests such as those from Sri Lanka.

In the study, the team examined the well-preserved material culture of the Fa-Hien Lena cave, deep in the heart of Sri Lanka's rainforests. "Fa-Hien Lena has become one of the most important archaeological sites in South Asia since the 1980s due to the well-preserved human remains, tools, and remains of prey," said co-author Oshan Wedage, a PhD student at the MPI-SHH. The main finds include bone tools with single and double tips, which were thought to be used to exploit tropical resources. There has been no direct evidence of this as detailed microscopic analysis was lacking.

Michelle Langley of Griffith University and lead author of the new study is an expert in examining microscopic traces of tool use and the development of material cultures in the Pleistocene. The application of the most modern methods to the Fa-Hien-Lena material confirmed the hypothesis. Langley notes, "The breaks at the tips indicate damage from a strong impact - something that is commonly seen when hunting with a bow and arrow on animals. This evidence is older than similar findings in Southeast Asia at around age 32,000 years and currently the oldest evidence of the use of bows and arrows outside the African continent ".

The research team also found further evidence of early human innovation in Sri Lanka. Using the same microscopic approach, tools could be identified which were used for fishing in the nearby tropical rivers and for the production of fibers to make nets or clothing. “We also found clear evidence of the production of colored pearls from mineral ocher and the refined production of pearls from shells that were traded on the coast. At 45,000 years, these are of a similar age to other materials found in Eurasia and Southeast Asia, ”says Michelle Langley. In summary, these findings reveal a complex, early social network in the tropics of South Asia.


Close-up of pearls and mineral ocher from Fa-Hien Lena

The study underlines that specific technological, symbolic or cultural developments of the Pleistocene people can no longer be linked to a single region. "The evidence from Sri Lanka shows that the invention of bows and arrows, clothing and symbolic acts occurred at different times and in different regions, which also include the tropical rainforests of Asia," said co-author Michael Petraglia from the MPI-SHH. Clothing could not only have been used to protect against the cold, but also as protection against tropical mosquitoes and "bows and arrows help not only to hunt large savannah mammals, but also to hunt small, tree-living primates and rodents" Noel Amano, also co-author and scientist at the MPI-SHH.

While archeology has long focused on the uniqueness of European behavioral modernity markers, this study is part of a growing awareness that extraordinary and complex technologies emerged in many regions at the end of the Paleolithic. "During this time, people have shown exceptional ingenuity and the ability to colonize and use a range of new environments," notes Nicole Boivin, director of the MPI-SHH and co-author of the study. "Thanks to these skills, they were able to populate almost every continent on the planet about 10,000 years ago, and they clearly set us on the path to the global species that we are today."