Europa's ocean may be habitable.

A new model from NASA scientists supports the theory that the interior ocean in Jupiter's moon Europa would be able to sustain life. In addition they have calculated that this water, believed to be an ocean under the surface ice shell, could have been formed by breakdown of water-containing minerals due to either tidal forces or radioactive decay. This work, which is not yet peer-reviewed, is presented for the first time at the virtual Goldschmidt conference, and may have implications for other moons in the Solar System.

Europa is one of the largest moons in the solar system. Since the flybys of the Voyager and Galileo spacecraft, scientists have held that the surface crust floats on a subsurface ocean. However the origins and composition of this ocean have been unclear. 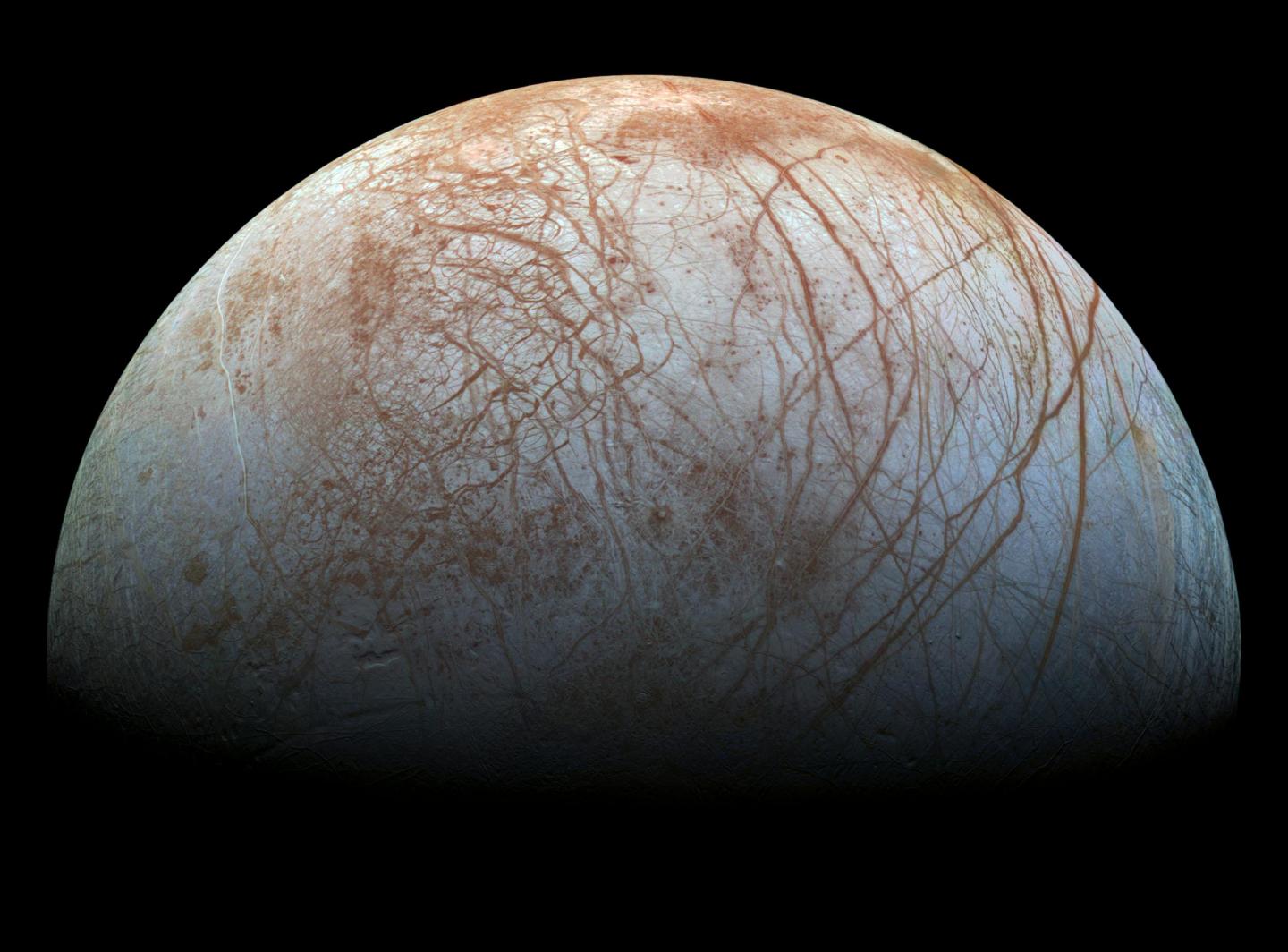 The researchers, based at NASA's Jet Propulsion Laboratory in California, modelled geochemical reservoirs within the interior of Europa using data from the Galileo mission. Lead researcher Mohit Melwani Daswani said "We were able to model the composition and physical properties of the core, silicate layer, and ocean. We find that different minerals lose water and volatiles at different depths and temperatures. We added up these volatiles that are estimated to have been lost from the interior, and found that they are consistent with the current ocean's predicted mass, meaning that they are probably present in the ocean".

The researchers found that ocean worlds such as Europa can be formed by metamorphism: in other words, heating and increased pressure caused by early radioactive decay or later subsurface tidal movement, would cause the breakdown of water-containing minerals, and the release of the trapped water.

They also found that this ocean would originally have been mildly acidic, with high concentrations of carbon dioxide, calcium and sulfate. "Indeed it was thought that this ocean could still be rather sulfuric" said Mohit Melwani Daswani, "but our simulations, coupled with data from the Hubble Space Telescope*, showing chloride on Europa's surface, suggests that the water most likely became chloride rich. In other words, its composition became more like oceans on Earth. We believe that this ocean could be quite habitable for life."

In this  newly reprocessed Europa image, details are visible in the variety of features on the moon's icy surface. This image of an area called Chaos Transition shows blocks that have moved and ridges possibly related to how the crust fractures from the force of Jupiter's gravity. 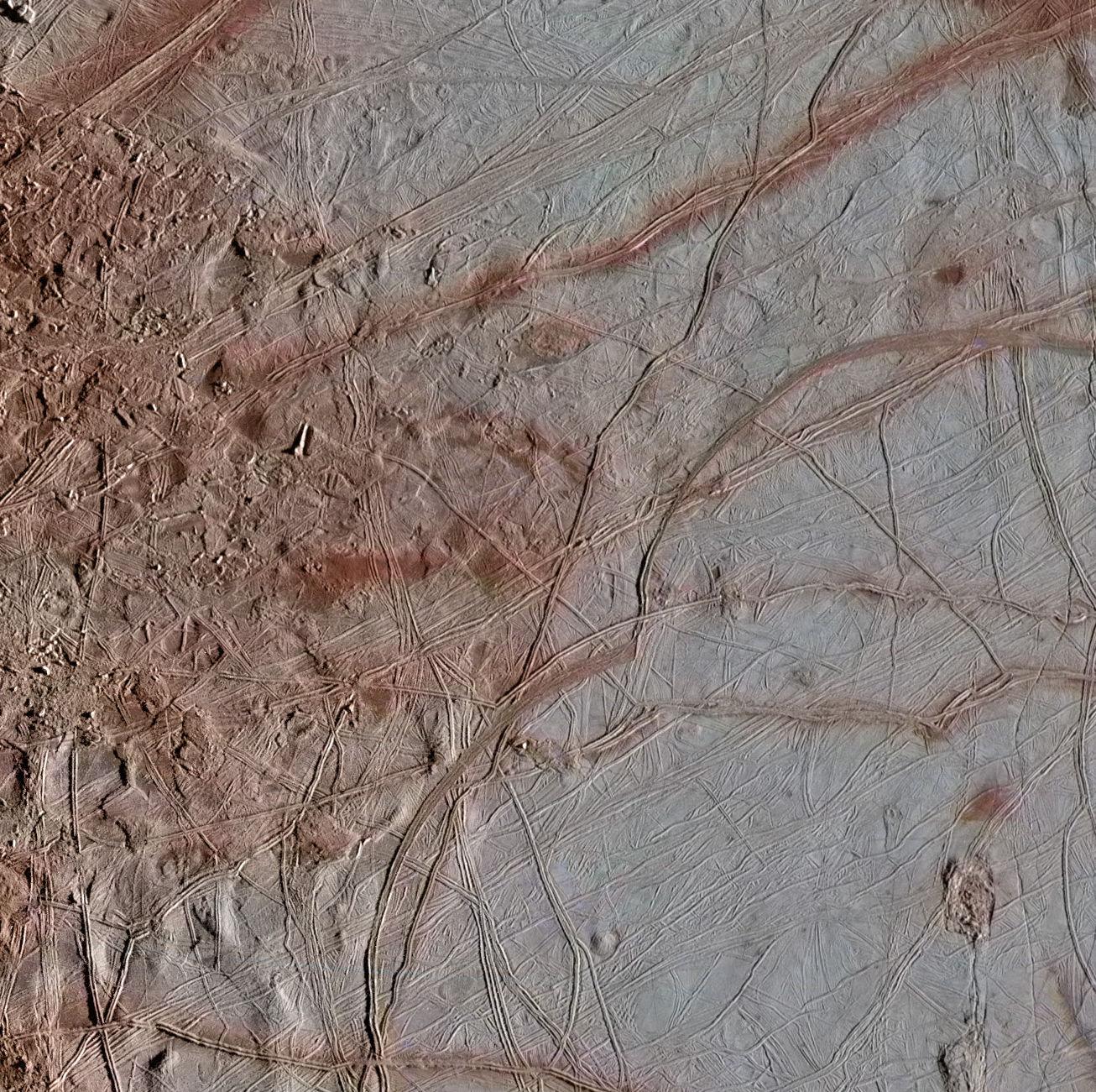 
He continued, "Europa is one of our best chances of finding life in our solar system. NASA's Europa Clipper mission will launch in the next few years, and so our work aims to prepare for the mission, which will investigate Europa's habitability. Our models lead us to think that the oceans in other moons, such as Europa's neighbor Ganymede, and Saturn's moon Titan, may also have formed by similar processes. We still need to understand several points though, such as how fluids migrate through Europa's rocky interior".

The researchers have now teamed up with groups in Nantes and Prague to try to identify if seafloor volcanoes may have contributed to the evolution of the chloride-rich water on Europa. NASA has recently released new high-resolution photos of Europa, showing possible exploration sites to test these findings.

All three images were captured along the same longitude of Europa as Galileo flew by on Sept. 26, 1998, in the spacecraft's 17th orbit of Jupiter (orbit E17). It was the eighth of Galileo's 11 targeted flybys of Europa. 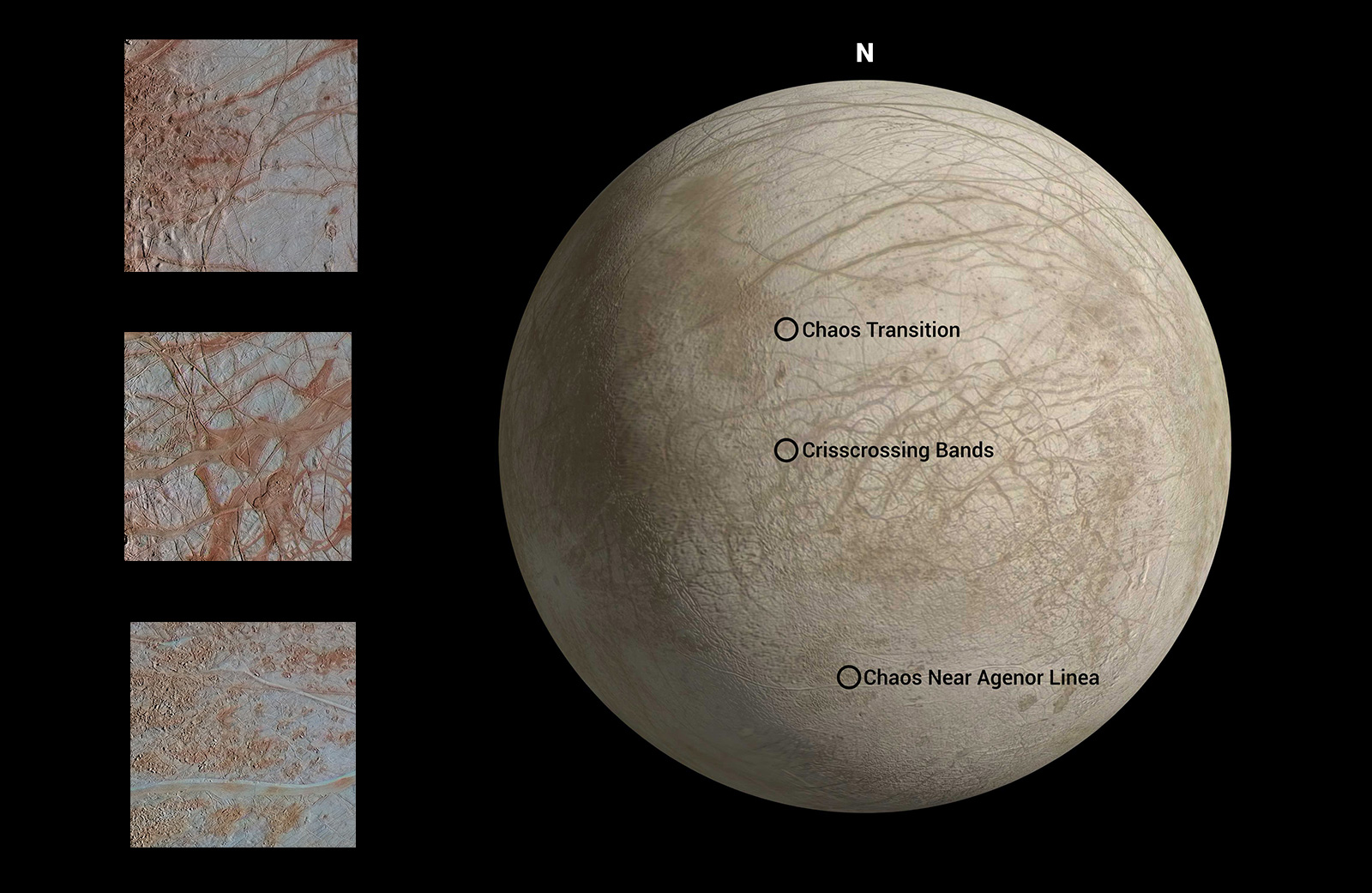 Commenting, Professor Steve Mojzsis, Professor of Geology at the University of Colorado, said:
"A long-standing question over whether a "cloaked ocean" world like Europa could be habitable boils down to whether it can sustain a flow of electrons which might provide the energy to power life. What remains unclear is whether such icy moons could ever generate enough heat to melt rock; certainly interesting chemistry takes place within these bodies, but what reliable flow of electrons could be used by alien life to power itself in the cold, dark depths? A key aspect that makes a world "habitable" is an intrinsic ability to maintain these chemical disequilibria. Arguably, icy moons lack this ability, so this needs to be tested on any future mission to Europa".

Enhanced-color images like these allow scientists to highlight geologic features with different colors, which are related to chemical compositions of the surface. Areas that appear light blue or white are made up of relatively pure water ice, and reddish areas have more non-ice materials. 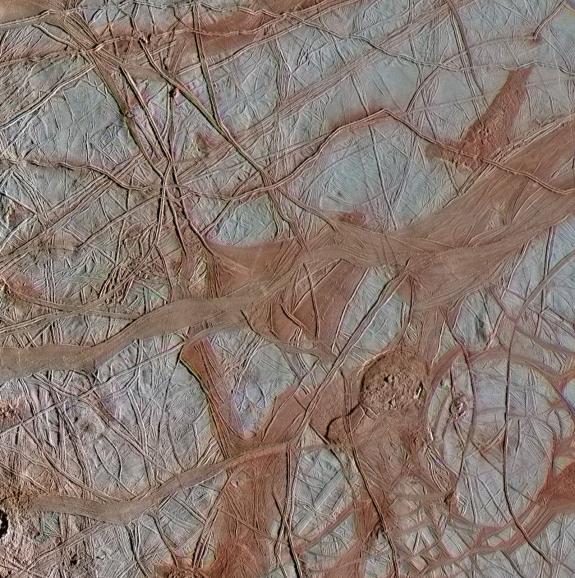 Professor Mojzsis was not involved in this work, this is an independent comment.

With a diameter of 3,100km, Europa is slightly smaller than the Earth's Moon. As Europa orbits Jupiter around 780 million km from the Sun, the surface temperature never rises above minus 160 Celsius; the ocean temperature is still unknown. Galileo is credited with discovering Europa, along with 3 larger moons of Jupiter, on January 8th 1610. 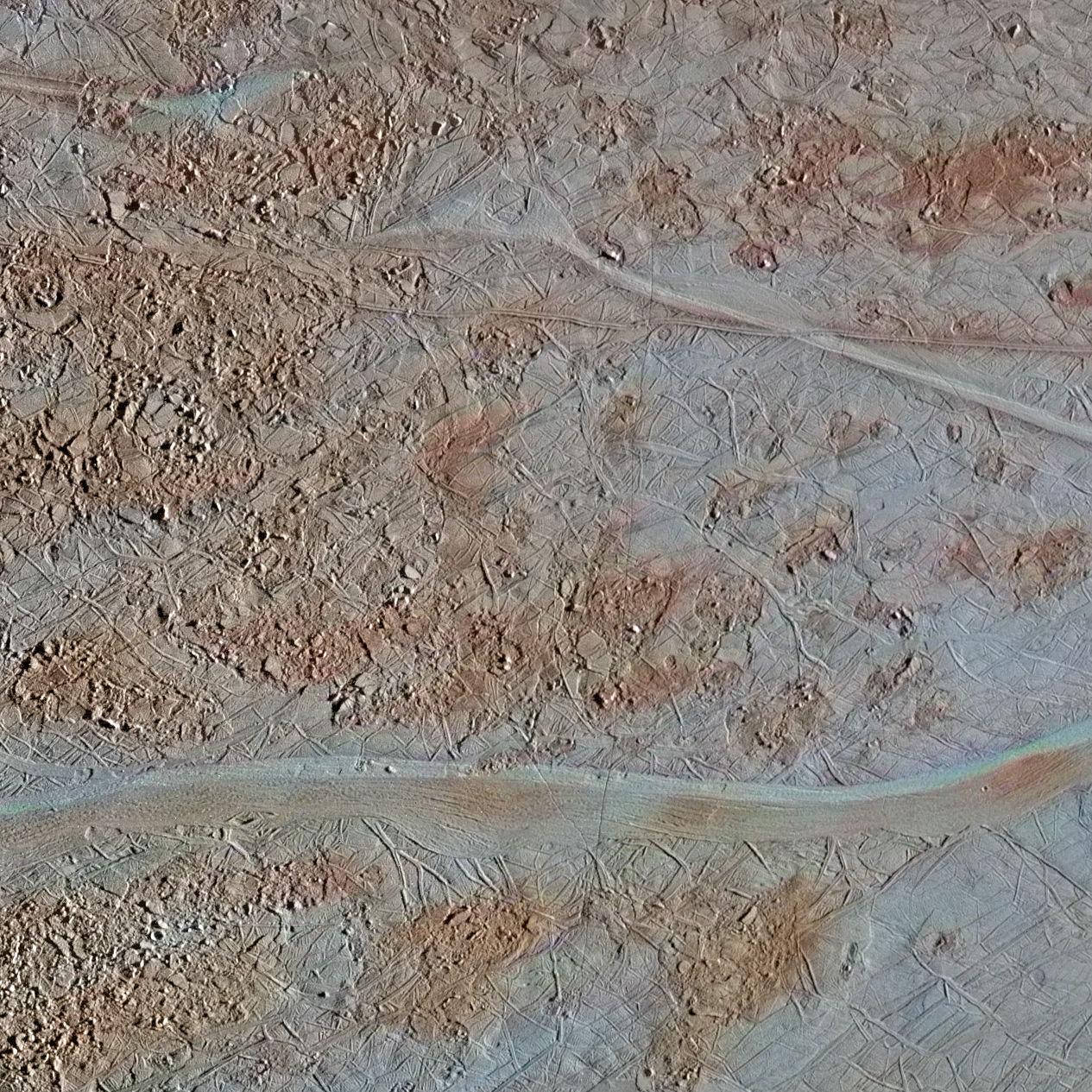 The Goldschmidt conference thanks the NASA Jet Propulsion Laboratory for their cooperation in the production of this material and use of photograph. For more information on the Europa Clipper mission, see https://europa.nasa.gov/

The Goldschmidt conference is the world's main geochemistry conference, hosted by the Geochemical Society and the European Association of Geochemistry. Held annually, it covers such material as climate change, astrobiology, planetary and stellar development and conditions, chemistry of Earth materials, pollution, the undersea environment, volcanoes, and many other subjects. For 2020 the scheduled Hawaii congress has been moved online, and takes place from 21-26 June, see https://goldschmidt.info/2020/index. Future congresses are in Lyon, France (2021) and the rescheduled Hawaii congress (2022).