Reversions to asexual reproduction are rare in nature. Asexual birth, in the Cape honey bee, may be the first time that the genetic basis of such a phenomenon has been discovered.

In a study published today in Current Biology, researchers from University of Sydney have identified the single gene that determines how Cape honey bees reproduce without ever having sex. One gene, GB45239 on chromosome 11, is responsible for virgin births.

“It is extremely exciting,” said Professor Benjamin Oldroyd in the School of Life and Environmental Sciences. “Scientists have been looking for this gene for the last 30 years. Now that we know it’s on chromosome 11, we have solved a mystery.”

Behavioural geneticist Professor Oldroyd said: “Sex is a weird way to reproduce and yet it is the most common form of reproduction for animals and plants on the planet. It’s a major biological mystery why there is so much sex going on and it doesn’t make evolutionary sense. Asexuality is a much more efficient way to reproduce, and every now and then we see a species revert to it.” 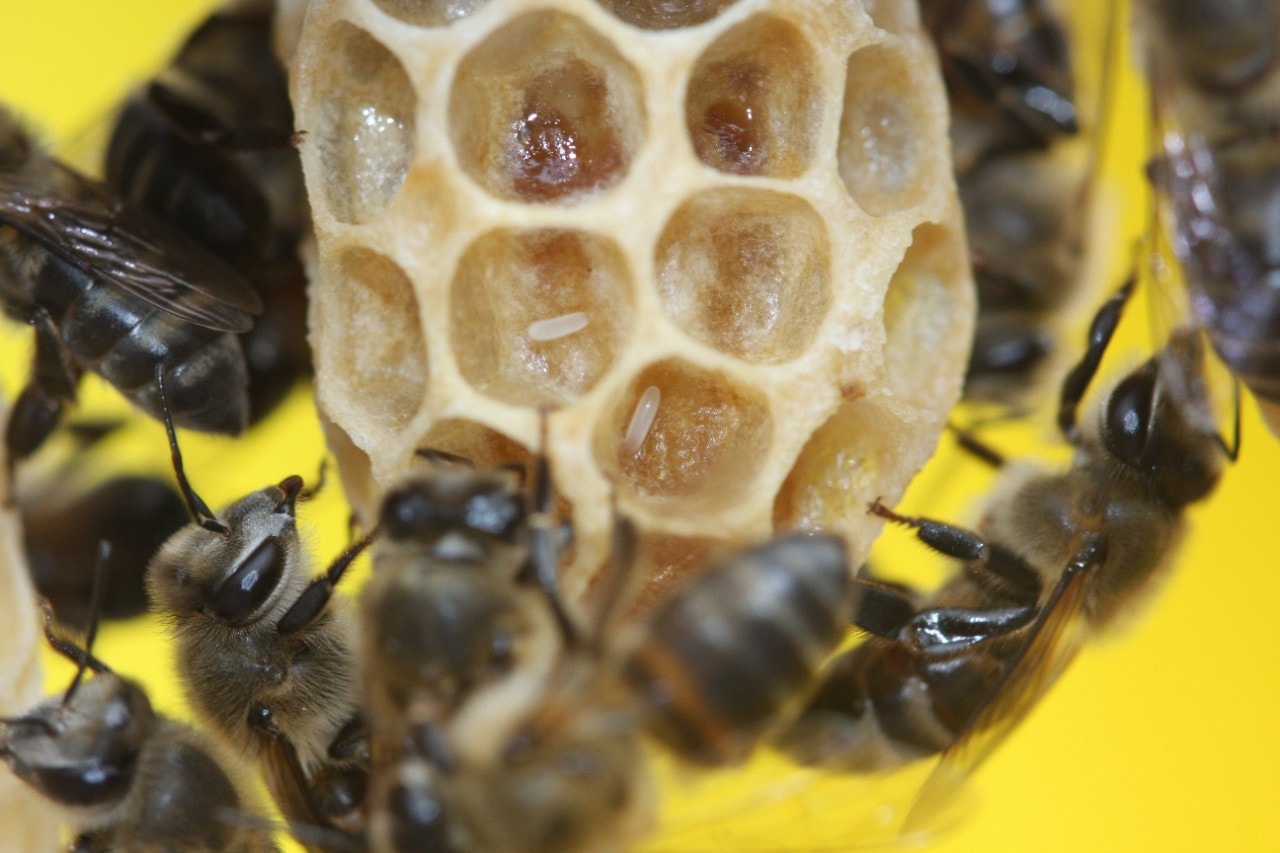 In the Cape honey bee, found in South Africa, the gene has allowed worker bees to lay eggs that only produce females instead of the normal males that other honey bees do. “Males are mostly useless,” Professor Oldroyd said. “But Cape workers can become genetically reincarnated as a female queen and that prospect changes everything.”

But it also causes problems. “Instead of being a cooperative society, Cape honey bee colonies are riven with conflict because any worker can be genetically reincarnated as the next queen. When a colony loses its queen the workers fight and compete to be the mother of the next queen,” Professor Oldroyd said.

The ability to produce daughters asexually, known as “thelytokous parthenogenesis”, is restricted to a single subspecies inhabiting the Cape region of South Africa, the Cape honey bee or Apis mellifera capensis.

Masses of parasitic eggs laid by parasites in a dying colony. 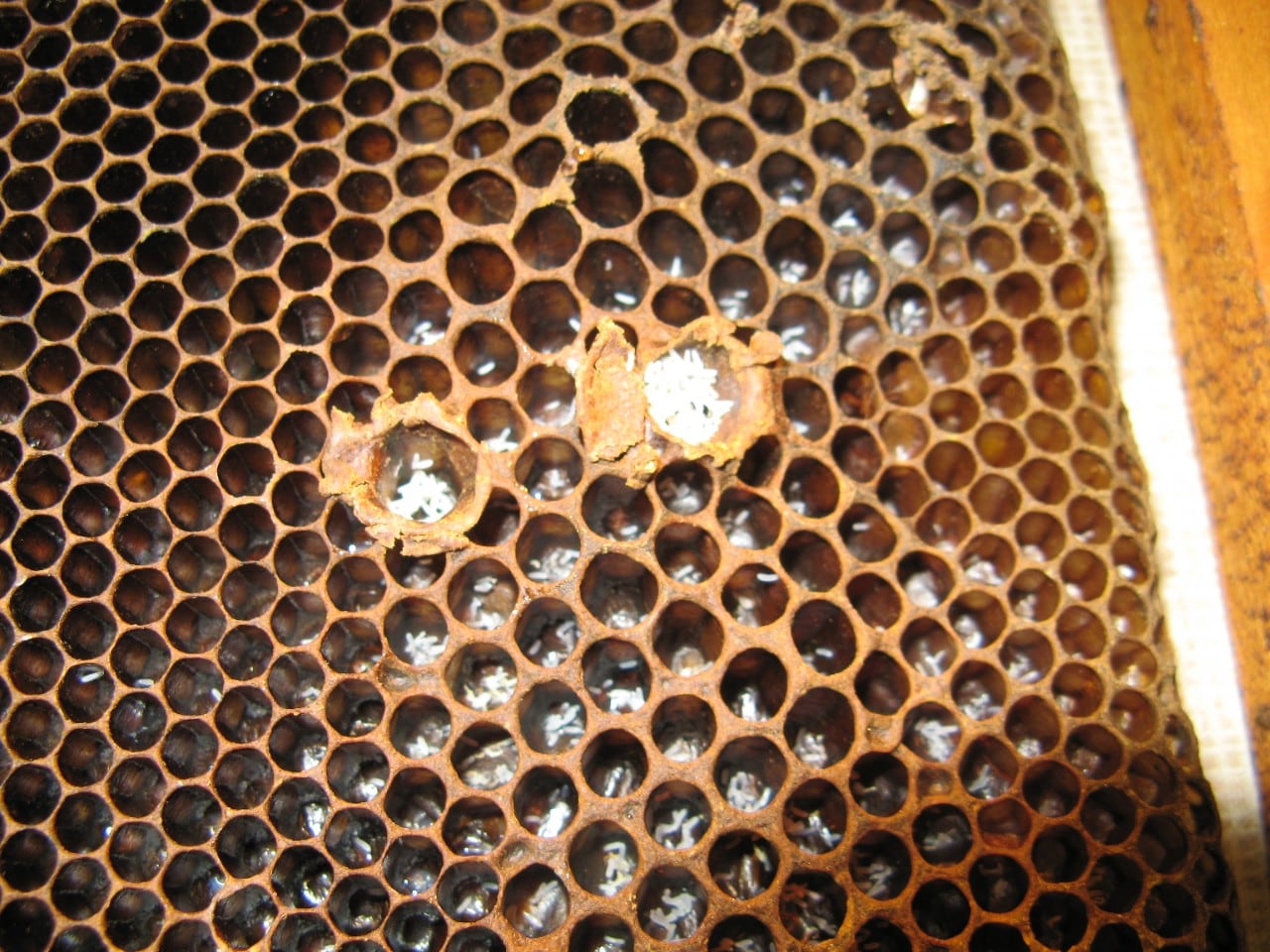 Several other traits distinguish the Cape honey bee from other honey bee subspecies. In particular, the ovaries of worker bees are larger and more readily activated and they are able to produce queen pheromones, allowing them to assert reproductive dominance in a colony.

These traits also lead to a propensity for social parasitism, a behaviour where Cape bee workers invade foreign colonies, reproduce and persuade the host colony workers to feed their larvae. Every year in South Africa, 10,000 colonies of commercial beehives die because of the social parasite behaviour in Cape honey bees.

“This is a bee we must keep out of Australia,” Professor Oldroyd said.

The existence of Cape bees with these characters has been known for over a hundred years, but it is only recently, using modern genomic tools, that we have been able to understand the actual gene that gives rise to virgin birth.

“Further study of Cape bees could give us insight into two major evolutionary transitions: the origin of sex and the origin of animal societies,” Professor Oldroyd said.

Perhaps the most exciting prospect arising from this study is the possibility to understand how the gene actually works functionally. “If we could control a switch that allows animals to reproduce asexually, that would have important applications in agriculture, biotechnology and many other fields,” Professor Oldroyd said. For instance, many pest ant species like fire ants are thelytokous, though unfortunately it seems to be a different gene to the one found in Capensis."

Contacts and sources:
University of Sydney