The most common organism in the oceans, and possibly on the entire planet, is a family of single-celled marine bacteria called SAR11. These drifting organisms look like tiny jelly beans and have evolved to outcompete other bacteria for scarce resources in the oceans.

The viruses, colored orange, attached to a membrane vesicle from the SAR11 marine bacteria, colored gray, that was the subject of this study. 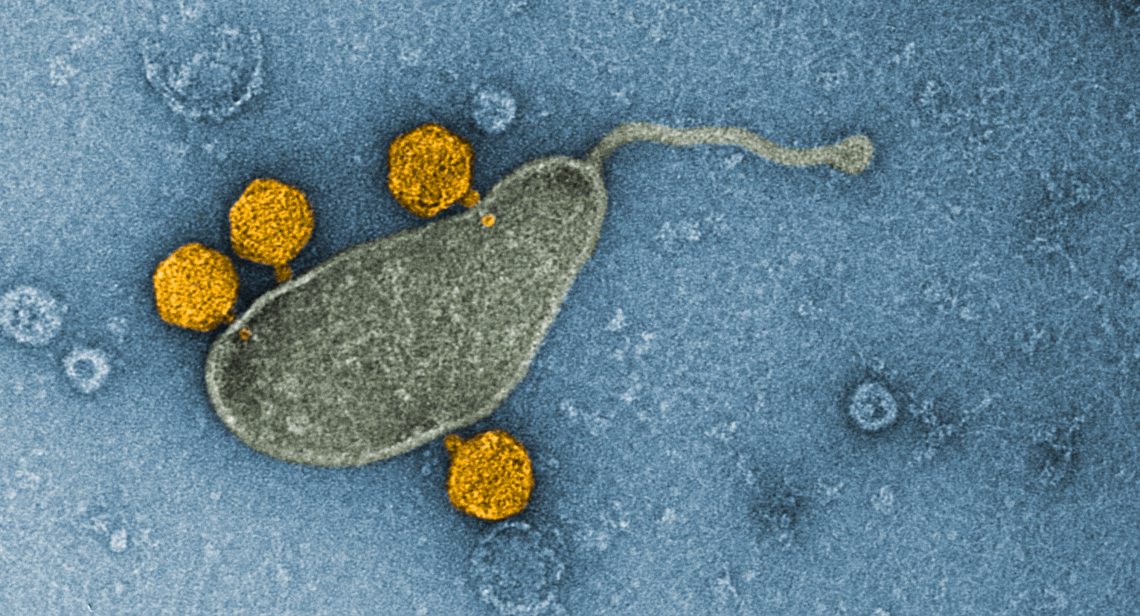 Credit: Morris et al./Nature Microbiology
We now know that this group of organisms thrives despite — or perhaps because of — the ability to host viruses in their DNA. A study published in May in Nature Microbiology could lead to new understanding of viral survival strategies.

University of Washington oceanographers discovered that the bacteria that dominate seawater, known as Pelagibacter or SAR11, hosts a unique virus. The virus is of a type that spends most of its time dormant in the host’s DNA but occasionally erupts to infect other cells, potentially carrying some of its host’s genetic material along with it.

Pelagibacter, or SAR11, is a single-celled bacterium that survives off dissolved carbon throughout the oceans. It makes up one in four cells on the ocean’s surface. 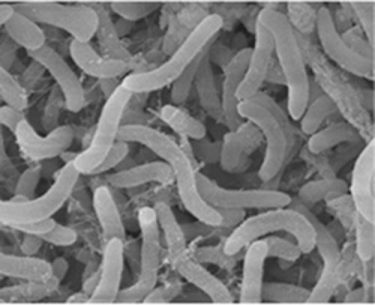 “Many bacteria have viruses that exist in their genomes. But people had not found them in the ocean’s most abundant organisms,” said co-lead author Robert Morris, a UW associate professor of oceanography. “We suspect it’s probably common, or more common than we thought — we just had never seen it.”

This virus’ two-pronged survival strategy differs from similar ones found in other organisms. The virus lurks in the host’s DNA and gets copied as cells divide, but for reasons still poorly understood, it also replicates and is released from other cells.

The new study shows that as many as 3% of the SAR11 cells can have the virus multiply and split, or lyse, the cell — a much higher percentage than for most viruses that inhabit a host’s genome. This produces a large number of free viruses and could be key to its survival.

“There are 10 times more viruses in the ocean than there are bacteria,” Morris said. “Understanding how those large numbers are maintained is important. How does a virus survive? If you kill your host, how do you find another host before you degrade?”

The study could prompt basic research that could help clarify host–virus interactions in other settings.

“If you study a system in bacteria, that is easier to manipulate, then you can sort out the basic mechanisms,” Morris said. “It’s not too much of a stretch to say it could eventually help in biomedical applications.”

The UW oceanography group had published a previous paper in 2019 looking at how marine phytoplankton, including SAR11, use sulfur. That allowed the researchers to cultivate two new strains of the ocean-dwelling organism and analyze one strain, NP1, with the latest genetic techniques.

Co-lead author Kelsy Cain fills a bottle with seawater off the coast of Oregon aboard the RV Roger Revelle during the VISIONS ’17 research cruise in July 2017. Cain diluted the water several times and then isolated a new strain of SAR11 bacteria that became the focus of the new paper. 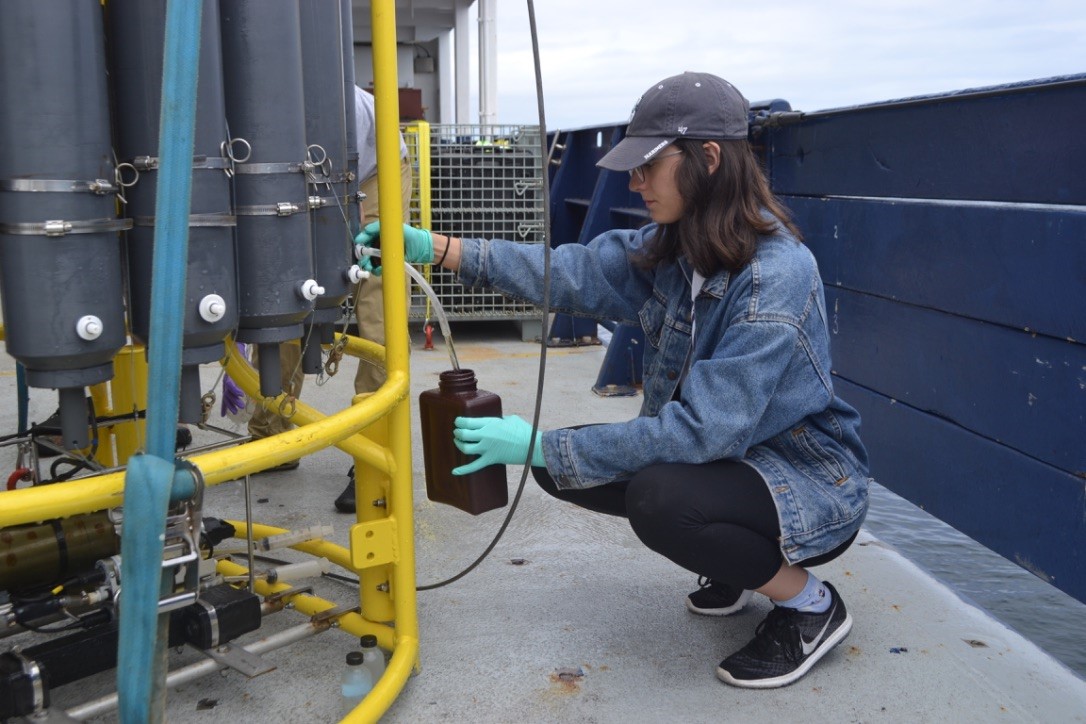 Co-lead author Kelsy Cain collected samples off the coast of Oregon during a July 2017 research cruise. She diluted the seawater several times and then used a sulfur-containing substance to grow the samples in the lab — a difficult process, for organisms that prefer to exist in seawater.

The team then sequenced this strain’s DNA at the UW PacBio sequencing center in Seattle.

“In the past we got a full genome, first try,” Morris said. “This one didn’t do that, and it was confusing because it’s a very small genome.”

The researchers found that a virus was complicating the task of sequencing the genome. Then they discovered a virus wasn’t just in that single strain.

“When we went to grow the NP2 control culture, lo and behold, there was another virus. It was surprising how you couldn’t get away from a virus,” said Cain, who graduated in 2019 with a UW bachelor’s in oceanography and now works in a UW research lab.

Cain’s experiments showed that the virus’ switch to replicating and bursting cells is more active when the cells are deprived of nutrients, lysing up to 30% of the host cells. The authors believe that bacterial genes that hitch a ride with the viruses could help other SAR11 maintain their competitive advantage in nutrient-poor conditions.

“We want to understand how that has contributed to the evolution and ecology of life in the oceans,” Morris said.