The oldest molecular fluids in the solar system could have supported the rapid formation and evolution of the building blocks of life, new research in the journal Proceedings of the National Academy of Sciences reveals.

An international group of scientists, led by researchers from the Royal Ontario Museum (ROM) and co-authors from McMaster University and York University, used state-of-the-art techniques to map individual atoms in minerals formed in fluids on an asteroid over 4.5 billion years ago.

"Magnetite framboids in Tagish Lake": The spherical interlocking structure is indicative of formation in water, allowing scientists the measure the chemistry of the remnant solution trapped between grains. 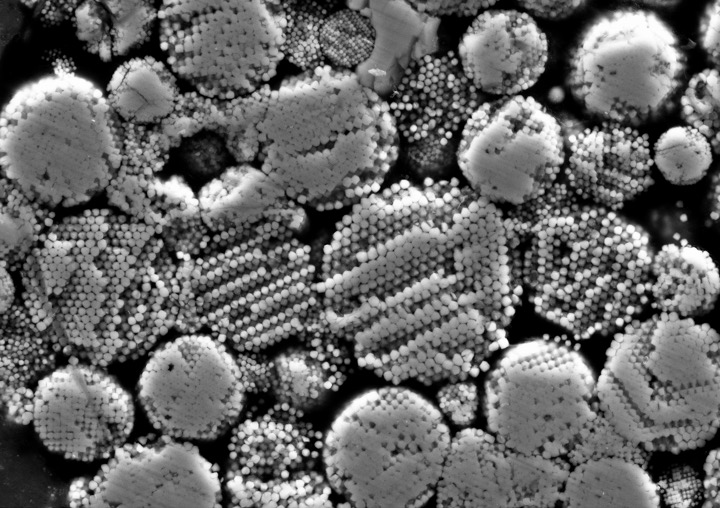 Studying the ROM’s iconic Tagish Lake meteorite, scientists used atom-probe tomography, a technique capable of imaging atoms in 3D, to target molecules along boundaries and pores between magnetite grains that likely formed on the asteroid’s crust. There, they discovered water precipitates left in the grain boundaries on which they conducted their ground-breaking research.

“We know water was abundant in the early solar system,” explains lead author Dr. Lee White, Hatch postdoctoral fellow at the ROM, “but there is very little direct evidence of the chemistry or acidity of these liquids, even though they would have been critical to the early formation and evolution of amino acids and, eventually, microbial life.”

This new atomic-scale research provides the first evidence of the sodium-rich (and alkaline) fluids in which the magnetite framboids formed. These fluid conditions are preferential for the synthesis of amino acids, opening the door for microbial life to form as early as 4.5 billion years ago.

"Amino acids are essential building blocks of life on Earth, yet we still have a lot to learn about how they first formed in our solar system,” says Beth Lymer, a PhD student Lassonde School of Engineering at York University and co-author of the study. “The more variables that we can constrain, such as temperature and pH, allows us to better understand the synthesis and evolution of these very important molecules into what we now know as biotic life on Earth.”

The Tagish Lake carbonaceous chondrite was retrieved from an ice sheet in B.C.’s Tagish Lake in 2000, and later acquired by the ROM, where it is now considered to be one of the museums iconic objects. This history means that the sample used by the team has never been above room temperature or exposed to liquid water, allowing the scientists to confidently link the measured fluids to the parent asteroid. By using new techniques, such as atom probe tomography, the scientists hope to develop analytical methods for planetary materials returned to Earth by space craft, such as by NASA’s OSIRIS-REx mission or a planned sample-return mission to Mars in the near future.

“Atom probe tomography gives us an opportunity to make fantastic discoveries on bits of material a thousand times thinner than a human hair,” says White. “Space missions are limited to bringing back tiny amounts of material, meaning these techniques will be critical to allowing us to understand more about the solar system while also preserving material for future generations.”