Scientists Find Highest Ever Level of Microplastics on Seafloor

An international research project has revealed the highest levels of microplastic ever recorded on the seafloor, with up to 1.9 million pieces in a thin layer covering just one square metre. 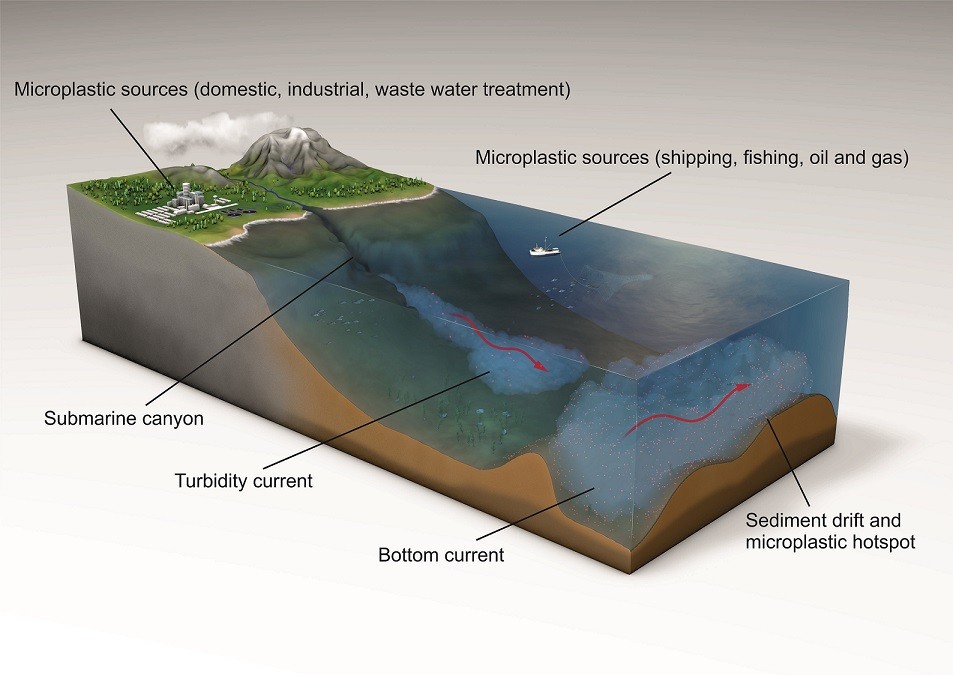 Over 10 million tons of plastic waste enters the oceans each year. Floating plastic waste at sea has caught the public’s interest thanks to the ‘Blue Planet Effect’ seeing moves to discourage the use of plastic drinking straws and carrier bags. Yet such accumulations account for less than 1% of the plastic that enters the world’s oceans.

The missing 99% is instead thought to occur in the deep ocean, but until now it has been unclear where it actually ended up. Published this week in the journal Science, the research conducted by; The University of Manchester, National Oceanography Centre (UK), University of Bremen (Germany), IFREMER (France) and Durham University (UK) showed how deep-sea currents act as conveyor belts, transporting tiny plastic fragments and fibres across the seafloor.

These currents can concentrate microplastics within huge sediment accumulations, which they termed ‘microplastic hotspots’. These hotspots appear to be the deep-sea equivalents of the so-called ‘garbage patches’ formed by currents on the ocean surface.

The lead author of the study, Dr Ian Kane of The University of Manchester said: “Almost everybody has heard of the infamous ocean ‘garbage patches’ of floating plastic, but we were shocked at the high concentrations of microplastics we found in the deep-seafloor.

“We discovered that microplastics are not uniformly distributed across the study area; instead they are distributed by powerful seafloor currents which concentrate them in certain areas.”

Microplastics on the seafloor are mainly comprised of fibres from textiles and clothing. These are not effectively filtered out in domestic waste water treatment plants, and easily enter rivers and oceans.

Almost everybody has heard of the infamous ocean ‘garbage patches’ of floating plastic, but we were shocked at the high concentrations of microplastics we found in the deep-seafloor. We discovered that microplastics are not uniformly distributed across the study area; instead they are distributed by powerful seafloor currents which concentrate them in certain areas." says Dr Ian Kane


In the ocean they either settle out slowly, or can be transported rapidly by episodic turbidity currents – powerful underwater avalanches – that travel down submarine canyons to the deep seafloor (see the group’s earlier research in Environmental Science & Technology).

Once in the deep sea, microplastics are readily picked up and carried by continuously flowing seafloor currents (‘bottom currents’) that can preferentially concentrate fibres and fragments within large drifts of sediment.

The team collected sediment samples from the seafloor of the Tyrrhenian Sea (part of the Mediterranean Sea) and combined these with calibrated models of deep ocean currents and detailed mapping of the seafloor. In the laboratory, the microplastics were separated from sediment, counted under the microscope, and further analysed using infra-red spectroscopy to determine the plastic types. Using this information the team were able to show how ocean currents controlled the distribution of microplastics on the seafloor.

Dr Mike Clare of the National Oceanography Centre, who was a co-lead on the research, stated: “Our study has shown how detailed studies of seafloor currents can help us to connect microplastic transport pathways in the deep-sea and find the ‘missing’ microplastics. The results highlight the need for policy interventions to limit the future flow of plastics into natural environments and minimise impacts on ocean ecosystems.”

Dr Florian Pohl, Department of Earth Sciences, Durham University, said: “It’s unfortunate, but plastic has become a new type of sediment particle, which is distributed across the seafloor together with sand, mud and nutrients. Thus, sediment-transport processes such as seafloor currents will concentrate plastic particles in certain locations on the seafloor, as demonstrated by our research.”

The paper is published in Science, via First Release, (the article will appear in print at a later date). Citation: Kane et al. (2020) Seafloor microplastic hotspots controlled by deep-sea circulation.
\
Contacts and sources:
Ben Robinson
University of Manchester