NASA's Hubble Space Telescope and the ground-based Gemini Observatory in Hawaii have teamed up with the Juno spacecraft to probe the mightiest storms in the solar system, taking place more than 500 million miles away on the giant planet Jupiter.

A team of researchers led by Michael Wong at the University of California, Berkeley, and including Amy Simon of NASA's Goddard Space Flight Center in Greenbelt, Maryland, and Imke de Pater also of UC Berkeley, are combining multiwavelength observations from Hubble and Gemini with close-up views from Juno's orbit about the monster planet, gaining new insights into turbulent weather on this distant world.

"We want to know how Jupiter's atmosphere works," said Wong. This is where the teamwork of Juno, Hubble and Gemini comes into play.

Jupiter's constant storms are gigantic compared to those on Earth, with thunderheads reaching 40 miles from base to top — five times taller than typical thunderheads on Earth — and powerful lightning flashes up to three times more energetic than Earth's largest "superbolts."

Like lightning on Earth, Jupiter's lightning bolts act like radio transmitters, sending out radio waves as well as visible light when they flash across the sky.

This graphic shows observations and interpretations of cloud structures and atmospheric circulation on Jupiter from the Juno spacecraft, the Hubble Space Telescope and the Gemini Observatory. By combining the Juno, Hubble and Gemini data, researchers are able to see that lightning flashes are clustered in turbulent regions where there are deep water clouds and where moist air is rising to form tall convective towers similar to cumulonimbus clouds (thunderheads) on Earth. The bottom illustration of lightning, convective towers, deep water clouds and clearings in Jupiter's atmosphere is based on data from Juno, Hubble and Gemini, and corresponds to the transect (angled white line) indicated on the Hubble and Gemini map details. The combination of observations can be used to map the cloud structure in three dimensions and infer details of atmospheric circulation. Thick, towering clouds form where moist air is rising (upwelling and active convection). Clearings form where drier air sinks (downwelling). The clouds shown rise five times higher than similar convective towers in the relatively shallow atmosphere of Earth. The region illustrated covers a horizontal span one-third greater than that of the continental United States. 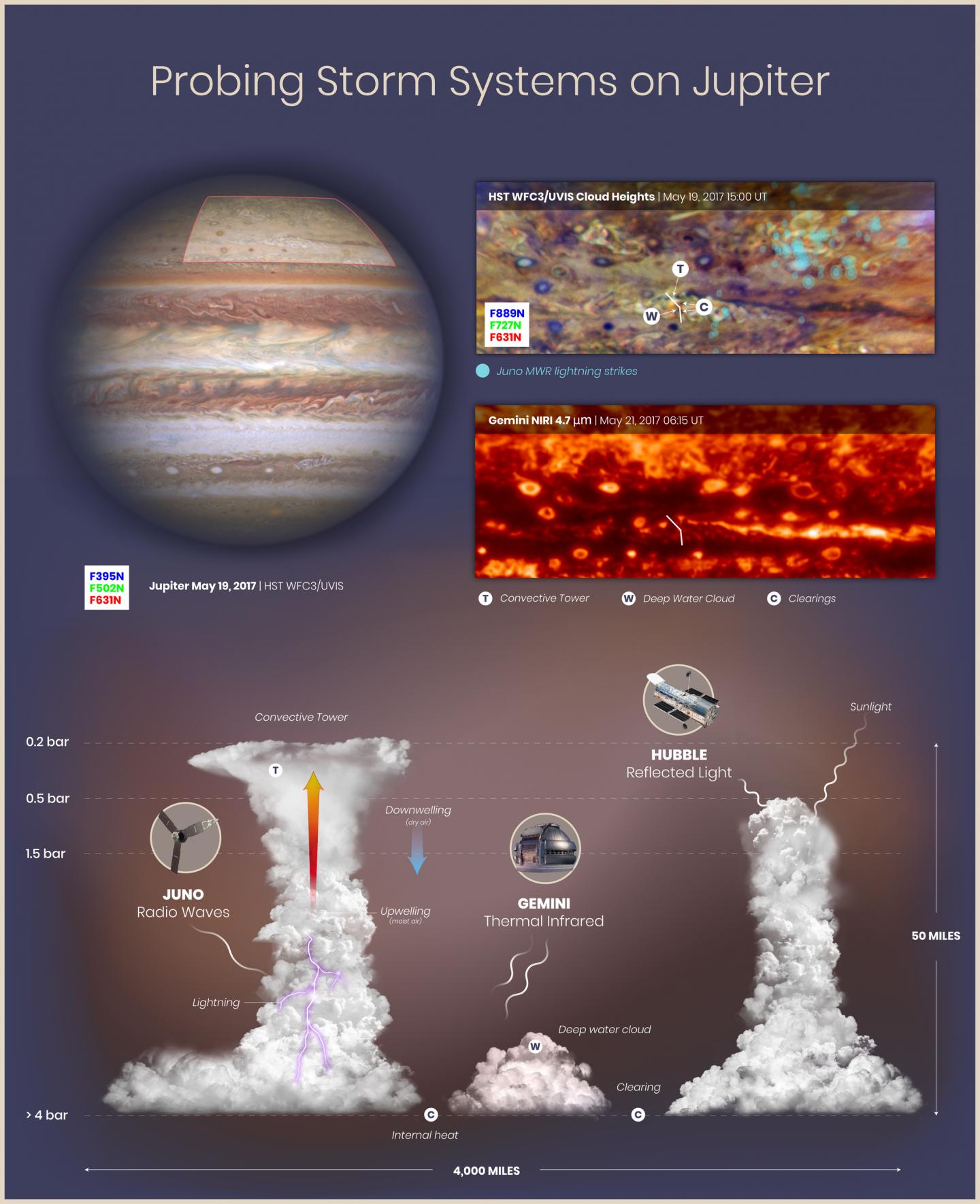 
Every 53 days, Juno races low over the storm systems detecting radio signals known as "sferics" and "whistlers," which can then be used to map lightning even on the day side of the planet or from deep clouds where flashes are not otherwise visible.

Coinciding with each pass, Hubble and Gemini watch from afar, capturing high-resolution global views of the planet that are key to interpreting Juno's close-up observations. "Juno's microwave radiometer probes deep into the planet's atmosphere by detecting high-frequency radio waves that can penetrate through the thick cloud layers. The data from Hubble and Gemini can tell us how thick the clouds are and how deep we are seeing into the clouds," Simon explained.

By mapping lightning flashes detected by Juno onto optical images captured of the planet by Hubble and thermal infrared images captured at the same time by Gemini, the research team has been able to show that lightning outbreaks are associated with a three-way combination of cloud structures: deep clouds made of water, large convective towers caused by upwelling of moist air — essentially Jovian thunderheads — and clear regions presumably caused by downwelling of drier air outside the convective towers.

The Hubble data show the height of the thick clouds in the convective towers, as well as the depth of deep water clouds. The Gemini data clearly reveal the clearings in the high-level clouds where it is possible to get a glimpse down to the deep water clouds.

Wong thinks that lightning is common in a type of turbulent area known as folded filamentary regions, which suggests that moist convection is occurring in them. "These cyclonic vortices could be internal energy smokestacks, helping release internal energy through convection," he said. "It doesn't happen everywhere, but something about these cyclones seems to facilitate convection."

The ability to correlate lightning with deep water clouds also gives researchers another tool for estimating the amount of water in Jupiter's atmosphere, which is important for understanding how Jupiter and the other gas and ice giants formed, and therefore how the solar system as a whole formed.

While much has been gleaned about Jupiter from previous space missions, many of the details — including how much water is in the deep atmosphere, exactly how heat flows from the interior and what causes certain colors and patterns in the clouds — remain a mystery. The combined result provides insight into the dynamics and three-dimensional structure of the atmosphere.
Seeing a 'Jack-O-Lantern' Red Spot

With Hubble and Gemini observing Jupiter more frequently during the Juno mission, scientists are also able to study short-term changes and short-lived features like those in the Great Red Spot.

Images from Juno as well as previous missions to Jupiter revealed dark features within the Great Red Spot that appear, disappear and change shape over time. It was not clear from individual images whether these are caused by some mysterious dark-colored material within the high cloud layer, or if they are instead holes in the high clouds — windows into a deeper, darker layer below.

Now, with the ability to compare visible-light images from Hubble with thermal infrared images from Gemini captured within hours of each other, it is possible to answer the question. Regions that are dark in visible light are very bright in infrared, indicating that they are, in fact, holes in the cloud layer. In cloud-free regions, heat from Jupiter's interior that is emitted in the form of infrared light — otherwise blocked by high-level clouds — is free to escape into space and therefore appears bright in Gemini images.

"It's kind of like a jack-o-lantern," said Wong. "You see bright infrared light coming from cloud-free areas, but where there are clouds, it's really dark in the infrared."


The images of Jupiter's Great Red Spot were made using data collected by the Hubble Space Telescope and the Gemini Observatory on April 1, 2018. By combining observations captured at almost the same time from the two different observatories, astronomers were able to determine that dark features on the Great Red Spot are holes in the clouds rather than masses of dark material. 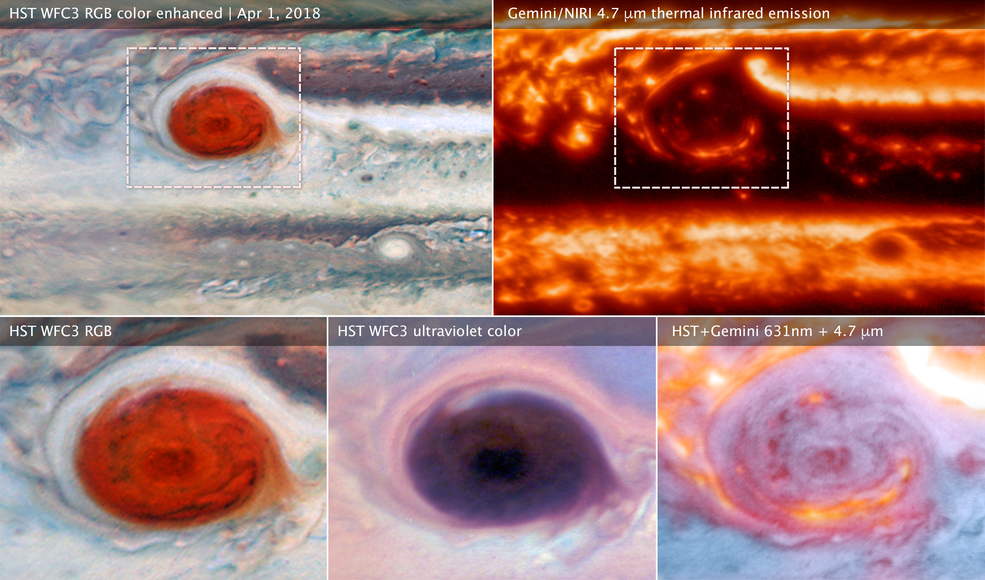 Upper right: A thermal infrared image of the same area from Gemini shows heat emitted as infrared energy. Cool overlying clouds appear as dark regions, but clearings in the clouds allow bright infrared emission to escape from warmer layers below.

Lower right: A multiwavelength composite of Hubble and Gemini data shows visible light in blue and thermal infrared in red. The combined observations show that areas that are bright in infrared are clearings or places where there is less cloud cover blocking heat from the interior.

The regular imaging of Jupiter by Hubble and Gemini in support of the Juno mission is proving valuable in studies of many other weather phenomena as well, including changes in wind patterns, characteristics of atmospheric waves and the circulation of various gases in the atmosphere.

Hubble and Gemini can monitor the planet as a whole, providing real-time base maps in multiple wavelengths for reference for Juno's measurements in the same way that Earth-observing weather satellites provide context for NOAA's high-flying Hurricane Hunters.

"Because we now routinely have these high-resolution views from a couple of different observatories and wavelengths, we are learning so much more about Jupiter's weather," explained Simon. "This is our equivalent of a weather satellite. We can finally start looking at weather cycles."

Because the Hubble and Gemini observations are so important for interpreting Juno data, Wong and his colleagues Simon and de Pater are making all of the processed data easily accessible to other researchers through the Mikulski Archives for Space Telescopes (MAST) at the Space Telescope Science Institute in Baltimore, Maryland.

"What's important is that we've managed to collect this huge data set that supports the Juno mission. There are so many applications of the data set that we may not even anticipate. So, we're going to enable other people to do science without that barrier of having to figure out on their own how to process the data," Wong said.

The results were published in April 2020 in The Astrophysical Journal Supplement Series.

The Hubble Space Telescope is a project of international cooperation between NASA and ESA (the European Space Agency). NASA's Goddard Space Flight Center in Greenbelt, Maryland, manages the telescope. The Space Telescope Science Institute (STScI) in Baltimore conducts Hubble science operations. STScI is operated for NASA by the Association of Universities for Research in Astronomy (AURA) in Washington, D.C. AURA operates the Gemini Observatory for the international Gemini partnership including the U.S., Canada, Chile, Argentina, Brazil and the Republic of Korea. NASA's Jet Propulsion Laboratory in Pasadena, California, manages the Juno mission for the Southwest Research Institute in San Antonio, Texas. Juno is part of NASA's New Frontiers Program, which is managed at NASA's Marshall Space Flight Center in Huntsville, Alabama, for NASA's Science Mission Directorate.