Blade-like tools and animal tooth pendants previously discovered in Europe, and once thought to possibly be the work of Neanderthals, are in fact the creation of Homo sapiens, who emigrated from Africa.


Entrance to the Bacho Kiro cave in Bulgaria. 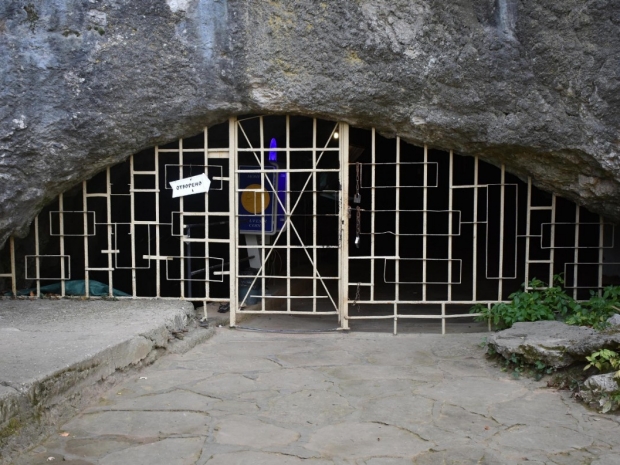 Blade-like tools and animal tooth pendants previously discovered in Europe, and once thought to possibly be the work of Neanderthals, are in fact the creation of Homo sapiens, or modern humans, who emigrated from Africa, finds a new analysis by an international team of researchers.

Its conclusions, reported in the journal Nature, add new clarity to the arrival of Homo sapiens into Europe and to their interactions with the continent’s indigenous and declining Neanderthal population.

The analysis centers on an earlier discovery of bones and other artifacts found in the Bacho Kiro cave in what is modern-day Bulgaria.

“Our findings link the expansion of what were then advanced technologies, such as blade tools and pendants made from teeth and bone, with the spread of Homo sapiens more than 45,000 years ago,” explains Shara Bailey, a professor in NYU’s Department of Anthropology and one of the paper’s co-authors. “This confirms that Homo sapiens were mostly responsible for these ‘modern’ creations and that similarities between these and other sites in which Neanderthals made similar things are due to interaction between the populations.”


Blade-like tools and animal tooth pendants previously discovered in Europe, and once thought to possibly be the work of Neanderthals, are in fact the creation of Homo sapiens, or modern humans, who emigrated from Africa, finds a new analysis by an international team of researchers. Stone artifacts from the Initial Upper Paleolithic at Bacho Kiro Cave. 1-3, 5-7: Pointed blades and fragments from Layer I; 4: Sandstone bead with morphology similar to bone beads; 8: The longest complete blade. 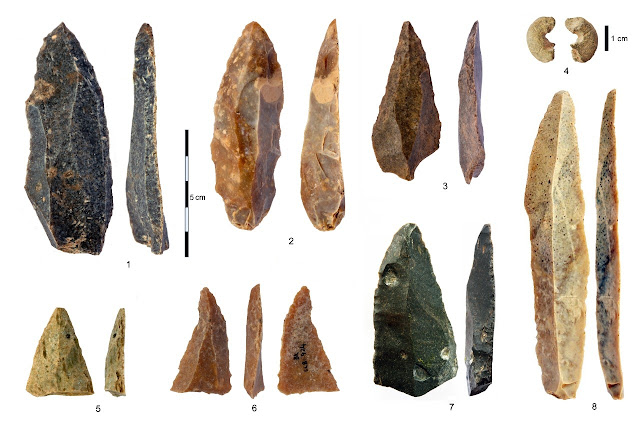 
The findings offer a new understanding of both the nature of these species and their interactions.

“If Neanderthals had created these ‘modern’ tools and jewelry, it would have indicated they had more advanced cognitive abilities than previously recognized,” explains Bailey. “Nonetheless, there are some similarities in manufacturing techniques used by Homo sapiens at Bacho Kiro and Neanderthals elsewhere, which makes clear that there was cultural transmission going on between the two groups.”

The analysis was led by researchers at the Max Planck Institute for Evolutionary Anthropology in Leipzig, Germany.

The team, which included scientists from Europe, the United States, and the United Kingdom, focused on the transition from the Middle to Upper Palaeolithic period, between 50,000 and 30,000 years ago. During this time, the European continent experienced the replacement and partial absorption of local Neanderthals by Homo sapiens populations from Africa. However, this process, anthropologists say, likely varied across regions, and the details of this transition remain largely unknown.

To better comprehend a piece of this transition, the team focused on one of several places—Bacho Kiro—where discoveries of the earliest modern technologies, such as pendants and blades, have been made.

To ascertain which species occupied the area of these discoveries, the scientists deployed several methodologies. Bailey, an expert in tooth analysis, and her colleagues examined teeth and bones that had been found in Bacho Kiro.

Using state-of-the-art technology called ZooMS (collagen peptide mass fingerprinting), they identified human bone fragments and concluded that they were at least 45,000 years old—a period coinciding with the arrival of multiple waves of Homo sapiens into Europe. Subsequent shape analyses of the tooth and DNA examination of the fragments determined that they belonged to Homo sapiens and not Neanderthals, whose presence was not evident among the discovered fossils.

“ZooMS allows us to identify previously unidentifiable bone fragments as some form of human,” explains Bailey. “From there, we can apply more sophisticated techniques to identify the species and more accurately date human bones.”