Astronomers have found two objects that, added to a strange object discovered in 2018, constitute a new class of cosmic explosions. The new type of explosion shares some characteristics with supernova explosions of massive stars and with the explosions that generate gamma-ray bursts (GRBs), but still has distinctive differences from each.

Artist's conception illustrates the differences in phenomena resulting from an "ordinary" core-collapse supernova explosion, an explosion creating a gamma-ray burst, and one creating a Fast Blue Optical Transient. Details in text.

The saga began in June of 2018 when astronomers saw a cosmic blast with surprising characteristics and behavior. The object, dubbed AT2018cow (“The Cow”), drew worldwide attention from scientists and was studied extensively. While it shared some characteristics with supernova explosions, it differed in important aspects, particularly its unusual initial brightness and how rapidly it brightened and faded in just a few days.

In the meantime, two additional blasts — one from 2016 and one from 2018 — also showed unusual characteristics and were being observed and analyzed. The two new explosions are called CSS161010 (short for CRTS CSS161010 J045834-081803), in a galaxy about 500 million light-years from Earth, and ZTF18abvkwla (“The Koala”), in a galaxy about 3.4 billion light-years distant. Both were discovered by automated sky surveys (Catalina Real-time Transient Survey, All-Sky Automated Survey for Supernovae, and Zwicky Transient Facility) using visible-light telescopes to scan large areas of sky nightly.

Anna Ho, of Caltech, lead author of the study on ZTF18abvkwla, immediately noted that the object’s radio emission was as bright as that from a gamma-ray burst. “When I reduced the data, I thought I had made a mistake,” she said.

Deanne Coppejans, of Northwestern University, led the study on CSS161010, which found that the object had launched an “unexpected” amount of material into interstellar space at more than half the speed of light. Her Northwestern co-author Raffaella Margutti, said, “It took almost two years to figure out what we were looking at just because it was so unusual.”

In both cases, the follow-up observations indicated that the objects shared features in common with AT2018cow. The scientists concluded that these events, called Fast Blue Optical Transients (FBOTs), represent, along with AT2018cow, a type of stellar explosion significantly different from others. The scientists reported their findings in papers in the Astrophysical Journal and the Astrophysical Journal Letters. 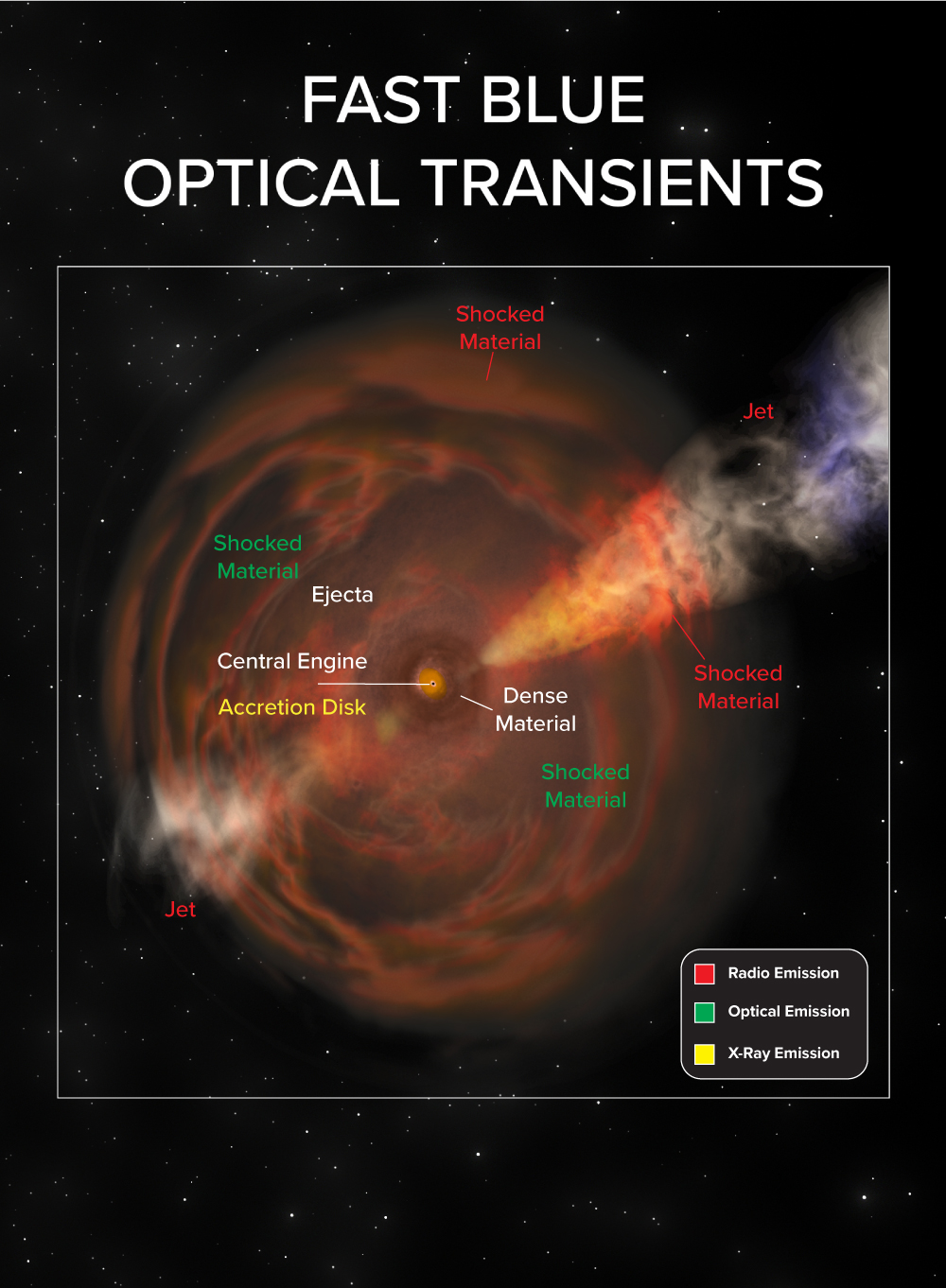 FBOTs probably begin, the astronomers said, the same way as certain supernovae and gamma-ray bursts — when a star much more massive than the Sun explodes at the end of its “normal” atomic fusion-powered life. The differences show up in the aftermath of the initial explosion.

In the “ordinary” supernova of this type, called a core-collapse supernova, the explosion sends a spherical blast wave of material into interstellar space. If, in addition to this, a rotating disk of material briefly forms around the neutron star or black hole left after the explosion and propels narrow jets of material at nearly the speed of light outward in opposite directions, these jets can produce narrow beams of gamma rays, causing a gamma-ray burst.

The rotating disk, called an accretion disk, and the jets it produces, are called an “engine” by astronomers.

FBOTs, the astronomers concluded, also have such an engine. In their case, unlike in gamma-ray bursts, it is enshrouded by thick material. That material probably was shed by the star just before it exploded, and may have been pulled from it by a binary companion.

When the thick material near the star is struck by the blast wave, it causes the bright visible-light burst soon after the explosion that initially made these objects appear so unusual. That bright burst also is why astronomers call these blasts “fast blue optical transients.” This is one of the characteristics that distinguished them from ordinary supernovae.

As the blastwave from the explosion collides with the material around the star as it travels outwards, it produces radio emission. This very bright emission was the important clue that proved that the explosion was powered by an engine.

Using the W.M. Keck Observatory, the astronomers found that both CSS 161010 and ZTF18abvkwla, like the Cow, are in small, dwarf galaxies. Coppejans said that the dwarf galaxy properties “might allow some very rare evolutionary paths of stars” that lead to these distinctive explosions.

Although a common element of the FBOTs is that all three have a ‘central engine,’ the astronomers caution that the engine also could be the result of stars being shredded by black holes, though they consider supernova-type explosions to be the more likely candidate.

“Observations of more FBOTs and their environments will answer this question,” Margutti said.

To do that, the scientists say they will need to use telescopes covering a wide range of wavelengths, as they have done with the first three objects. “While FBOTs have proven rarer and harder to find than some of us were hoping, in the radio band they’re also much more luminous than we’d guessed, allowing us to provide quite comprehensive data even on events that are far away,” said Daniel Perley, of the Liverpool John Moores University.