Evidence continues to mount that the Neandertals, who lived in Europe and Asia until about 40,000 years ago, were more sophisticated people than once thought. A new study from UC Davis shows that Neandertals chose to use bones from specific animals to make a tool for specific purpose: working hides into leather.

Naomi Martisius, research associate in the Department of Anthropology, studied Neandertal tools from sites in southern France for her doctoral research. The Neandertals left behind a tool called a lissoir, a piece of animal rib with a smoothed tip used to rub animal hides to make them into leather. These lissoirs are often worn so smooth that it’s impossible to tell which animal they came from just by looking at them. 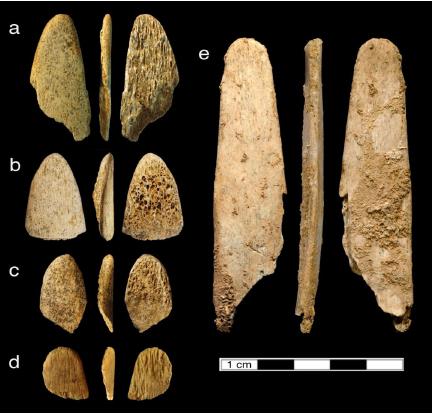 Martisius and colleagues used highly sensitive mass spectrometry to look at residues of collagen protein from the bones. The method is called ZooMS, or Zooarchaeology by Mass Spectrometry. The technique breaks up samples into fragments that can be identified by their mass to charge ratio and used to reconstruct the original molecule.

Normally, this method would involve drilling a sample from the bone. To avoid damaging the precious specimens, Martisius and colleagues were able to lift samples from the plastic containers in which the bones had been stored and recover enough material to perform an analysis.
Favoring bovine ribs over deer

The results show that the bones used to make lissoirs mostly came from animals in the cattle family, such as bison or aurochs (a wild relative of modern cattle that is now extinct). But other animal bones from the same deposit show that reindeer were much more common and frequently hunted for food. So the Neandertals were choosing to use only ribs from certain types of animals to make these tools.

“I think this shows that Neandertals really knew what they were doing,” Martisius said. “They were deliberately picking up these larger ribs when they happened to come across these animals while hunting and they may have even kept these rib tools for a long time, like we would with a favorite wrench or screwdriver.”

Bovine ribs are bigger and more rigid than deer ribs, making them better suited for the hard work of rubbing skins without wearing out or breaking.

“Neandertals knew that for a specific task, they needed a very particular tool. They found what worked best and sought it out when it was available,” Martisius said.